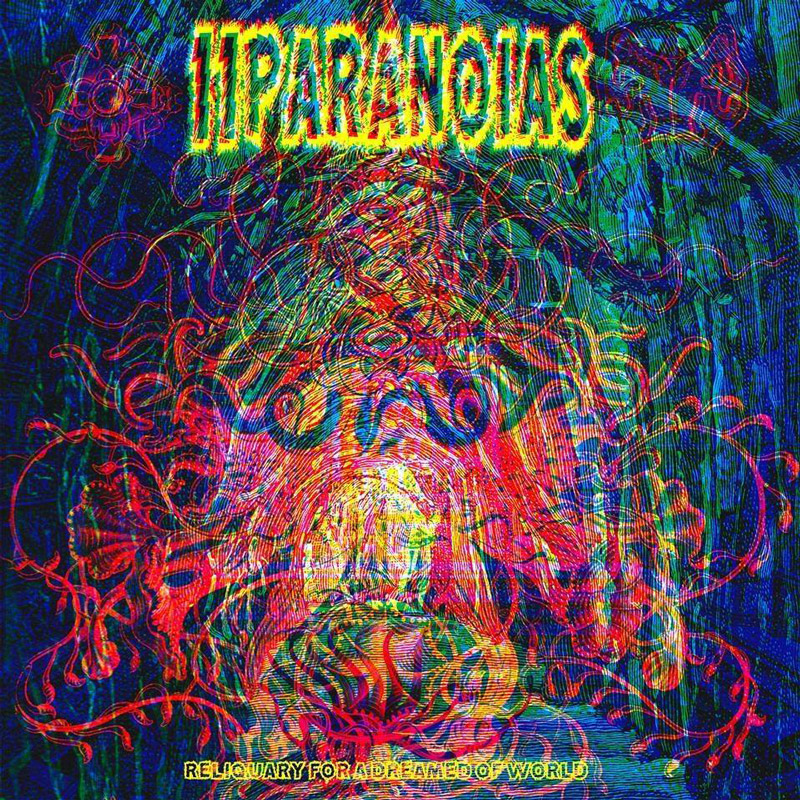 With the mirage of Multidimensional Paranoid Vision, 11PARANOIAS hypnotise listeners into their hullabaloo of highs. Intense mind whirls, blistering euphoria and spectral wonderment are induced by their darkened psychedelia, opening realms of aural, visual and further sensory paranoia!

HMA: So what are the 11 PARANOIAS and how have configured the name?

Adam Richardson: 11PARANOIAS is CHAOS – a state of being that flies in the face of decent and proper physics and nature… We formed on 11/11/11 but the name actually refers to existing in multiple dimensions – 11 to be exact – simultaneously, which to some minds is impossible… At the time of our creation I was reading about a new theory in quantum physics and mathematics which proposed the existence of an 11th dimension as opposed to the 10 dimensions that were widely believed to exist at the time (that theory has now been replaced with endless infinite dimensions) – a reference to quantum understanding at a specific point in time – we have already outlived our own theoretical existence!..

HMA: ‘Reliquary for a Dreamed of World’ released last year received outstanding reviews and praises. Considering you worked on both music and visuals, how the two disciplines complement each other or are it part of the same narrative?

AR: The creation of the Sonics and Visuals seem to have occurred in different dimensions themselves – they were two years apart in their completion! As with our other 3 LPs, we always record on a Solstice and always finish tracking in 2 days.. With this recording I only had the title which is derived from a short weird fiction story I have partially written based on the incidents processes and forces leading up to the procurement of a psychically charged reliquary from a magickal jewellers near where I live…I am not sure what will happen to this when it is completed.. The Reliquary which I now own does not feature in the artwork as that seemed too literal – even as a hidden layer – it reverberates in my curiosity cabinet and tries to suck in all light…and some sound…hypnotic to behold but ultimately lethal!.

AR: Of course the work is wildly psychedelic and surely touches fantasy if not actually illustrates it, however this is more of a by-product of the process of creation. The art is created by RGB process which is how television is viewed – ie Red, Green and Blue light merging together to create the other colours in the spectrum we humans can see. The record and cd come with a MPV (Multidimensional Paranoid Vision) Key –– which is a packet of red, blue and green filters which you hold up to your eyes in turn – each key reveals one of three obscured layers or paranoid realms.

I wanted this cover to be a fully immersive experience harking back to the age of colour TV and the young science behind its creation whilst insisting the listener/voyager partake of the original immersive psychedelic LP experience – a feast for the eyes as well as the ears – before 21st century distractions but after swallowing the blue pill – an invitation to a wild trip. The images were kindly supplied by Ouroboros Press private library and then the 2-year process of laying out and merging the images to look pleasing/informative/mind-bending on their own – before the Keys are added.. It was quite an experience which I fully expected to leave me never wanting to look at the cover again… however, I still love poring over it..It appears to reduce most viewers, myself included, to a young child – awed and slack-jawed at something incredible…

HMA: In terms of inspirations, is there anything you enjoy being obsessed by?

AR: Very much so. Many masters of the weird tale like Thomas Liggotti, Algernon Blackwood, Clark Ashton Smith etc. This album has revealed my obsession with Authur Machen another of my favourite authors of the strangeness of nature as well as the star of the story about the reliquary… ‘Peripheral Metamorphoses’ is the opening song on ‘Reliquary for a Dreamed of World’ and is an admiring nod to Mr Machen and reflects my obsession with partially seen images, fleeting glimpses, double takes, déjà vu, viewing the reflected and refracted…these are the places I roam and wallow in..the great Prima Materia of my imagination..We are all obsessive creatures in 11PARANOIAS..we capture sounds and images that force you into and/or out of your body..

HMA: In a world ravaged by political correctness, hysterical religious cults, impeding creativity and progress. What are your thoughts in this regards?

AR: I never let anything impede my creativity. My blinkers are monumental. Lead-lined affairs with huge muffles and little space for manoeuvring. Within the tight confines of my deathly hood, I can barely detect any light and must use rapid movement and parts of my face, especially eyelashes and beard, to decipher the eternally rewritten spells and crude etchings that fill my endless pitch night…

HMA: I believe you have been involved in several exhibitions, what is the public reaction to your work?

AR: I have occasionally exhibited individual pieces over the years in group shows and or charity events and I am always humbled by the feedback I have received. I have threatened to exhibit more of my work, but this idea is always swiftly usurped by another recording or record design.

I have also created screen prints for many other artists like Stanley Donwood and Atoms For Peace, Radiohead, The Horrors, Powell, Bobby Womack, Sigur Ros, Gil Scott-Heron etc

Beyond music and art, my work can be found in books like DPM where I contributed pieces like a customised bullet-proof police vest and ballistic body armour ceramic plate titled ‘Doom Dazzle’ (2nd from left in pull-out spread shot below) and designed a Peace and Munitions Dump I also designed a ‘Bone Collection’ for streetwear label Maharishi which featured a ‘Skeletal Dragon’ and ‘Skeletal Carp’ and ‘Human Skull’ design for heavy embroidery onto Sweatshirts, Jackets etc.