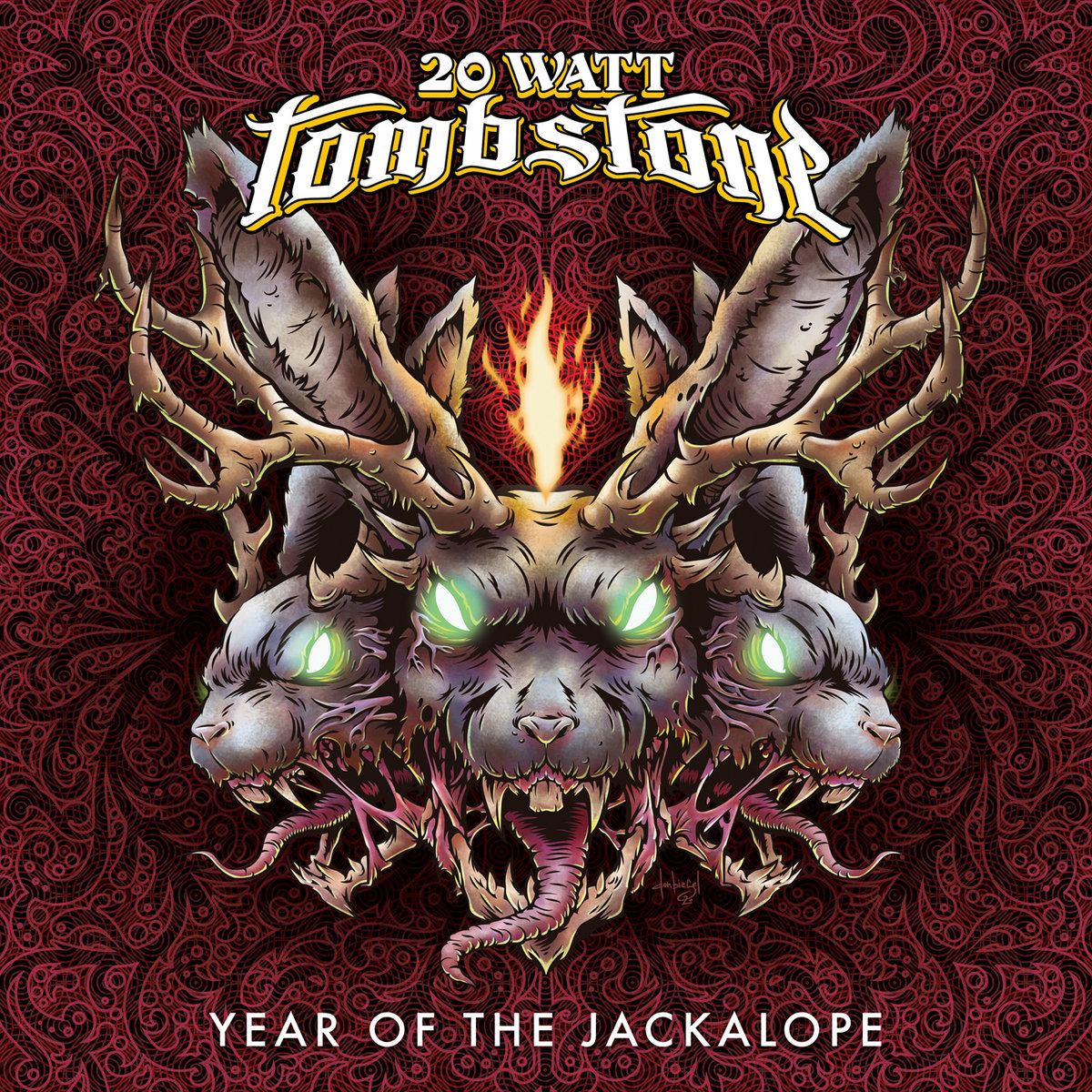 Year of the Jackalope with Tom Jordan

20 Watt Tombstone are Wausau Wisconsin’s hard-touring death blues saviours. They have played hundreds of shows over the past few years and recently embraced European shores in 2019. Fusing the sounds of ZZ Top with Kyuss by way of Robert Johnson and Black Flag, the band has continually outdone themselves since their formation in 2011.

I grew up listening to metal and rock; when I was 13 years old, one of the elders at our church introduced me to blues. He loaned me Taj Mahal’ Natch Blues’, Johnny Winter’s self-titled album and Fleetwood Mac’s ‘Black Magic Woman’ before the chicks came into the band, and they played blues. I also listened to a lot of punk as a kid. Mitch grew up a metalhead and still listens to a ton of metal, but we both like a ton of variety. It isn’t uncommon in the van on tour to hear Prince, The Weekend, RL Burnside, Waylon Jennings and Lamb of God on the same playlist!

The two songs on the EP’ Year of the Jackalope’ are covers this time around. We decided to pick two cover tunes and have fun and release them during covid to get our minds (and hopefully others minds) off of things with cool tunes written by people we respect. The first one is ZZ Top’s “Just got paid”, Always loved this one, and it’s made its way into our set more than once over the years. It seemed like a no brainer to do a ZZ Top song. The other is a bit more of a reach for us; it’s a Chris Stapleton song called “Midnight Train to Memphis” We loved the song and looked for a way to make it our own. It’s heavier than Stapleton’s, but I feel like we succeeded and made a version that complements the original well. We recorded both with Milwaukee Legend Jeff Hamilton of Beatallica and the Violent Femmes. Jeff is fantastic and super easy to work with. We were a bit nervous not having worked with him before, but he made us feel right at home, and he did a great job helping us translate these two songs!

Finding new music is sort of an obsession. We love finding and playing with new bands on the road and then bringing them to our state and introducing them to the people back home. We have a playlist of nothing but bands we have played with for the van when on tour—something exhilarating about discovering new music and then sharing that music.

Satan and God are popular themes in almost all music in some form, all the way back to the blues. That old testament good vs evil even goes into the old school country tunes. People create art of any kind; you’ll have their faith, beliefs, or whatever come through. That’s the beauty of art, and there is music to reflect most any belief these days.

I think all music can be iconoclastic, depends on the artist and the message, I guess. Metal can be angry, but it can also be melodic and soothing too. I’ve heard an acoustic guy sing his soul out harder and heavier than any metal band and make me want to break stuff, and I’ve heard a metal song so beautiful it gave me chills. I think all music can be all over the place, depending on the artists delivery and how the listener interprets it.

We aren’t a doom band, but we play a lot in that scene, I think one reason we mesh well with the doom and stoner rock scene is the type of music and the age of our audience. a big portion of our people are cannabis using, bourbon drinking people ages 25-45. I think my generation tends to use marijuana recreationally more now than previous generations. We are 100% for legalisation and decriminalisation; however, our creative process doesn’t play a huge part. We tend to benefit more from clear-headed writing and creativity, but we do take part in legal states.