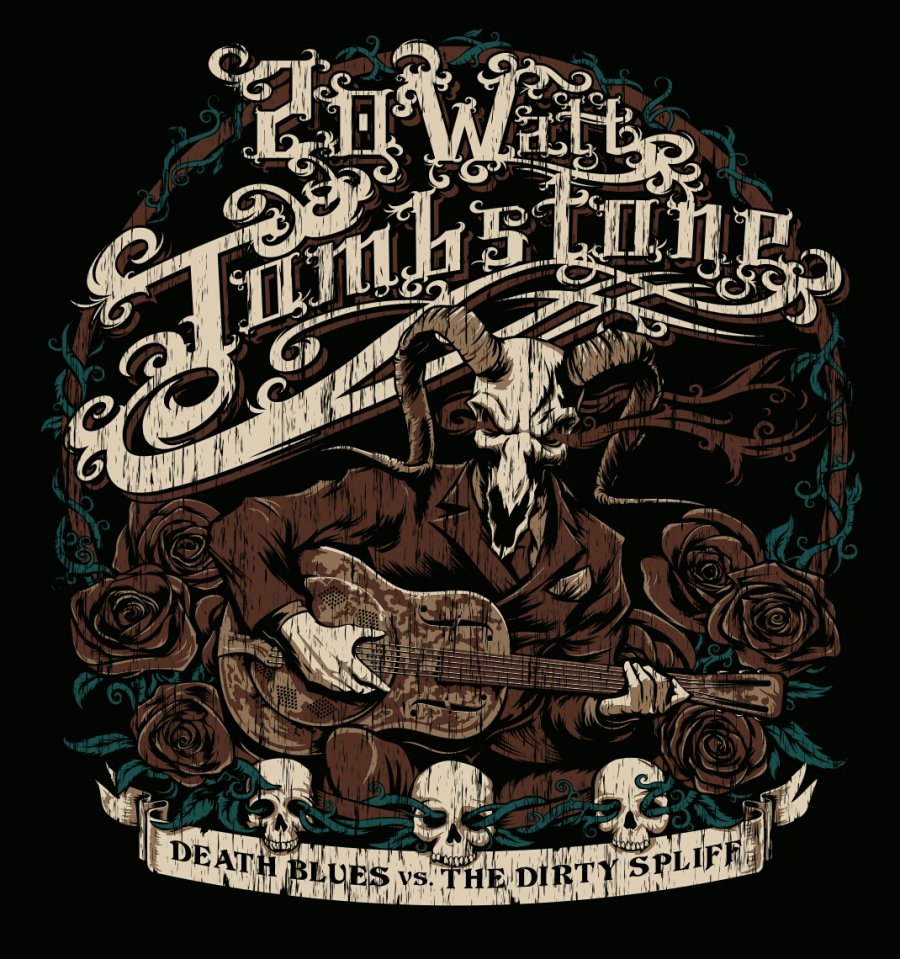 Death Blues By Grand Master Oh to the Zee

Born in the frozen north of Wausau, Wisconsin, fuzz-driven duo 20 Watt Tombstone has made a career out of loud rock n roll mixed with blues, metal and at times influences like roots and hip hop even shine through. Not quite stoner rock, not quite blues, the band lives for touring and spreading their brand of “Death blues” (a moniker coined by Freddie J Evans of Left lane cruiser) the name fits and the band embraces it. With influences ranging from Clutch, lamb of god and prince to RL Burnside, Howling Wolf and Motorhead; they are a band that continues to evolve and tour as much as possible.

We believe in an organic, raw approach to recording. We want the feeling and emotion intact. On this last record (as well as the one before it) we did all live takes. If a song sucked, we did it over. No patch ins, no overdubs, no additional guitar tracks or added bass tracks. It’s the two of us, loud in a room.

We think of the cd as more of an advertisement for the actual product which is the live show. If you play original music and want that music heard, the best way is playing it to people night after night.

Lately, the music is darker, a lot more stoner rock influence and psychedelic rock influenced. Blues is a huge part of what we do, but by no means are we a blues band. We avoid blues events or anything with blues in the name. Not because we hate the blues, but lots of people see the blues differently and expect us to be a certain way when playing those events. We just want to be us with bo constraints. As far as the new material we have been writing its more back to our rock roots, like the first record but that could change as the songs evolve.

Art and music have always been part of one another in my opinion. Whether you’re talking about actual artwork like album covers and t-shirts, or the creative aspect of making something that speaks from your soul to others who identify with your medium.

Well, my dad played old surf music and stuff like Bob Dylan on his acoustic guitar. That’s really the first music I can remember. After that the first real rebellious rock n roll band I ever heard was Kiss. At the time it was rebellious and different. It was heavier than anything I heard at the time. As a kid, I always hated what most kids liked. I preferred outsider music.. so eventually it got me into music like the Stooges and black flag. Eventually, I became the kid riding around on a skateboard listening to the misfits and iron maiden and finally found Black Sabbath (which changed my life) and then eventually blues. Now, there isn’t much other than pop country I don’t listen to. My iPod has everything from Prince and Waylon Jennings, to Lamb of God, Clutch, Bruno Mars and RL Burnside.

Our music changes daily. Sometimes the songs are funny and come from serious stuff like relationships gone bad that we have been able to find humour. We like to keep things entertaining, so we always try to write a few that people can laugh at. Lifes too short to be serious all the time.

For me personally, a belief system is what makes a person. Belief and faith don’t necessarily have to be based in religion. For me, beliefs can be a standard you hold yourself to morally or values. Belief in contributing to the greater good. Being kind. Helping others. For this band, we believe in hanging out with our fans, family, etc. We believe in the human connection of music and its ability to help people. We hope people not only enjoy our music but feel like they can talk to us. We live for the show but hanging with and meeting people that enjoy our music is what keeps us doing this.