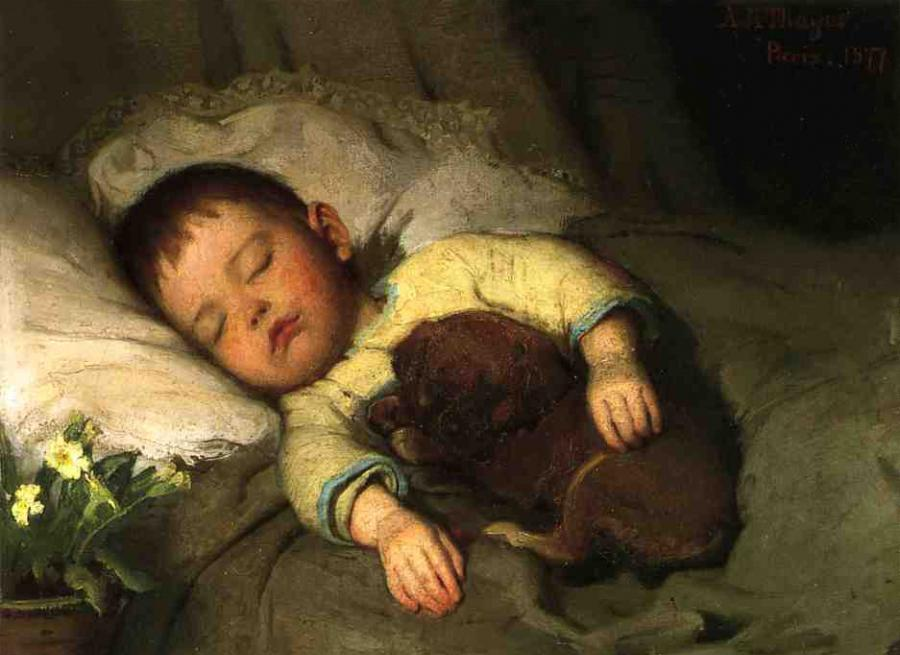 Abbott Handerson Thayer (1849-1921) was born in Boston to Dr. William Henry Thayer and Ellen Handerson Thayer. After his birth his family moved to Woodstock, Vermont, and in 1855 settled in Keene, New Hampshire. As a child Thayer developed a love of nature that was encouraged by his close family, which included three sisters, Ellen, Margaret, and Susan. At the age of fifteen he was sent to the Chauncy Hall School in Boston, and while there he met Henry D. Morse, an amateur animal painter. Under Morse’s instruction Abbott developed his skill in painting birds and other wildlife and began painting animal portraits on commission. In 1867 he moved to Brooklyn, New York and attended the Brooklyn Academy of Design where he studied under J. B. Whittaker for two years. In 1868 he began showing his work at the National Academy of Design and enrolled there in 1870, studying under Lemuel Wilmarth. He met many emerging artists during this period, including his future first wife, Kate Bloede and his close friend, Daniel Chester French. Thayer became part of progressive art circles, showing his work at the newly formed Society of American Artists, while continuing to develop his skill as an animal and landscape painter.

Thayer and Kate Bloede were married in 1875. They moved to Paris and he studied at the ?cole des Beaux-Arts, first under Henri Lehmann, and then with Jean-Léon Gérome. While in Europe he befriended fellow artists Everton Sainsbury, Thomas Millie Dow, George de Forest Brush, and Dwight Tryon. His daughter Mary was born in 1876 and his son William Henry in 1878. The family returned to America in 1879 and settled in his parent’s home in Brooklyn, where he changed his focus to portraits. After the tragic deaths of William Henry in 1880 and of their second son, Ralph Waldo, in 1881, the family led a migratory existence living in various parts of New England. In 1881 while living in Nantucket they met Emmeline (Emma) Beach (1850-1924) who would become close friends with Abbott and Kate and would be known as “Addie” to the family. In 1883 their son Gerald was born and in 1886 their daughter Gladys was born. In 1887 Thayer settled his family in Keene, New Hampshire, and began teaching a small group of students. Around this time his wife began suffering from severe depression and went to a sanatorium in 1888. She died in 1891 and that fall Thayer married Emma Beach who had helped to care for him and his children during his wife’s illness.

Despite family tragedies, Thayer became a leader in the New York art world during the 1880s and 1890s. He was a successful portraitist and painted allegorical figures of angels, women, and children, which were popular among collectors of this period, including his patrons Charles Lang Freer and John Gellatly. He often used his children as models, especially his eldest daughter, Mary.

In the late 1880s one of Thayer’s students, Mary Amory Greene, built a house and studio for the Thayer family on her land in Dublin, New Hampshire, and in 1901 the family settled there permanently. Many of Thayer’s artist friends lived nearby, such as Richard Meryman and George de Forest Brush, and the Thayer family frequently entertained prominent visitors such as Edward Waldo Emerson and Samuel Clemens. Abbott Thayer taught painting to his children, and Gerald and Gladys both became artists and art educators. Gladys married David Reasoner, a student of Abbott Thayer who later became his assistant. Other students of Thayer included Rockwell Kent, Ben Foster, Barry Faulkner, and Louis Agassiz Fuertes.

Greatly influenced by transcendentalism and the spirituality of nature, Thayer again began to paint landscapes, especially of nearby Mount Monadnock. He was very interested in the study of protective coloration in the wild, and was an advocate for nature conservation and bird sanctuaries. He published the book Concealing Coloration in the Animal Kingdom in 1909 with his son Gerald, but encountered much resistance to his theories. Thayer also wrote about how his camouflage theories could be applied to military warships and uniforms. These theories failed to gain widespread government interest and after suffering from nervous exhaustion, he spent the rest of his life painting landscapes at his home in Dublin, until his death in 1921.