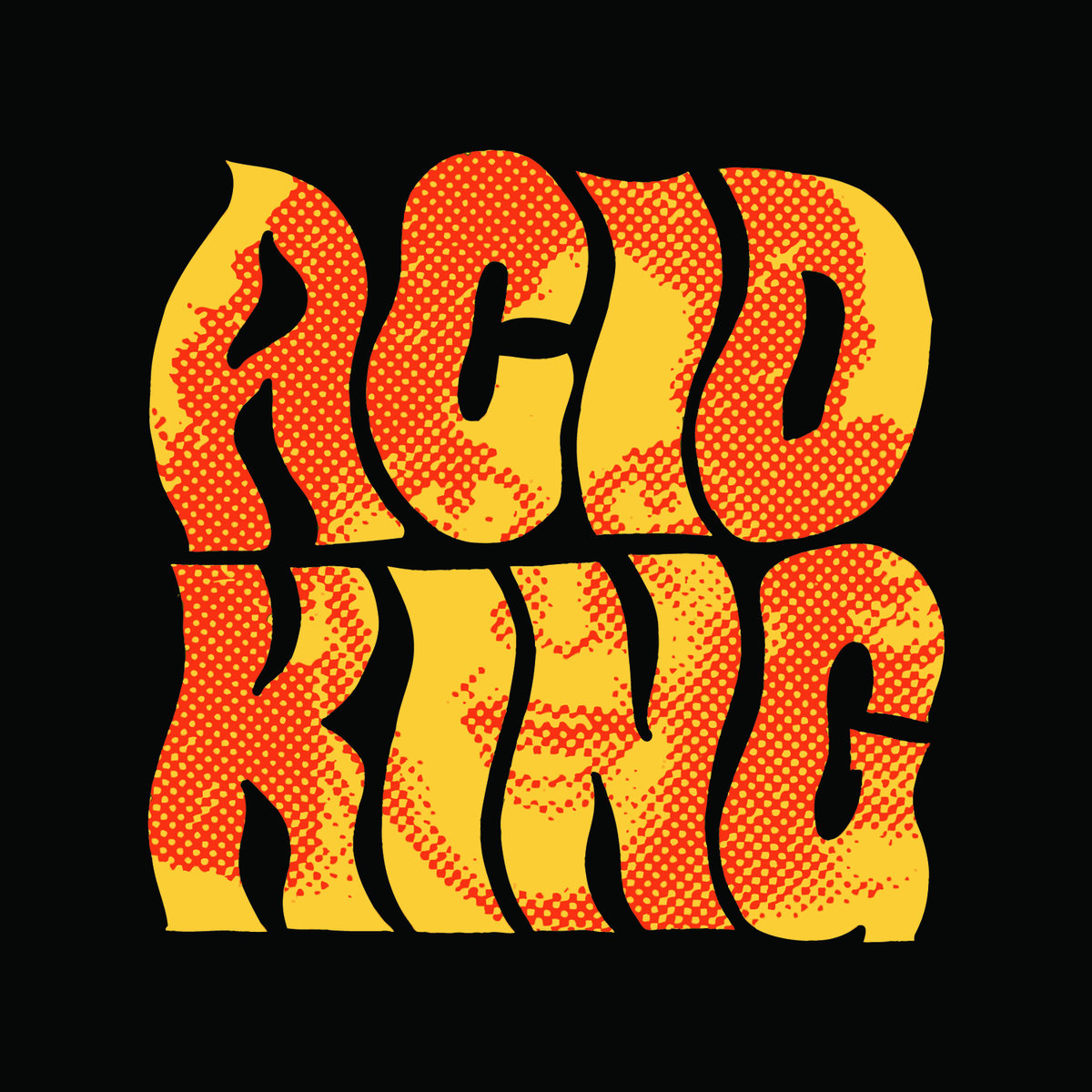 San Francisco’s stoner rock band Acid King formed in 1993. Singer/guitarist Lori Crover, bassist Peter Lucas and drummer Joey Osbourne started playing local shows that year with likeminded bands such as the Melvins, Hawkwind and the Obsessed. The group released their self-titled debut EP the following year on Sympathy For the Record Industry, which they followed with the 1995 full-length Zoroaster. While touring to support the album, Lucas quit the band and was replaced by Dan Southwick, also a member of Altamont, the side project of Melvins drummer (as well as Lori’s husband) Dale Crover. Acid King returned in 1997 with the Down With The Crown EP, which was released on Frank Kozik’s Man’s Ruin label. The following year Southwick returned to Altamont and Acid King found a new bassist in Brian Hill; the new lineup released Busse Woods in 1999.

After the end of Man’s Ruin AK took some time off and came back with their latest release CD “III” on Small Stone Records. They bid farewell to Guy on bass and say hello to Rafa Martinez and Mark Lamb on the 4 strings. Rafa – former guitarist for Gammera, former bass player for 16 and current drummer for Black Cobra – will join the band for an unlimited amount of time to play the new songs for most of the live performances. Mark Lamb, frontman for Scorched-Earth Policy will also be filling in the 4 strings and both kick major 4 string ass! With 2 European tours, 1 U.S and 1 Japan the band has taken some time off and is now in the process of writing a new record……..

HMA: First of all thanks for joining in me in this interview. You recently toured Europe earlier this summer with a few dates in the UK with legends Saints Vitus; tell us about your experience.

Acid King: It was totally rad! We’ve known Wino and Henry for quite a while and have played with one of Dave’s other bands in the past but got the chance to know him and Mark better on this trip. Good times were had by all, and it was an honor to play on the same stage as those guys.

HMA: Alan Forbes recently created artwork for your Acid King; do you give creative direction to artists?

Acid King: Lori may have given a little more guidance to Alan on the more recent motorcycle art work for the release of the Down with the Crown/Free album release on Kreation Records release but don’t think much was given when he did the initial killer alien native headdress for us. I was so stoked to work with him as I’d been a fan of his for years. It was actually my last roommate, Craig McGillivray, who connected us with Alan. Alan and Justin are a great team there at Secret Serpents.

HMA: In your cover artwork as well as lyrical theme we find a nice amount of symbolism i.e. occult, mythology, psychedelia, etc.? And how these topics influence and inspire you work?

Acid King: A lot of our aesthetic came from all the music and imagery we grew up on during the 70’s. When we first started out it was mostly about Ricky Kasso and motorcycles and the occasional drug reference and we’ve been expanding the imagery since. We’ve been fortunate to have worked with a lot of very amazing artists over the year including Alan Forbes, Frank Kozik, Ray Ahner, Jim Thompson, Jesse Stout and the list goes on.

HMA: Who are your influence in terms of art/style and why?

Acid King: We have different influences that we bring to the band. Tattoo art has always been an influence for Lori since her 1st tattoo in 1985! Tattoo artists then naturally became an influence. Tim Lehi from Black Heart Tattoo in SF will be designing a new t-shirt for us in the near future. Peter Max and 70’s psych has always been a part of Lori’s childhood and artistic influence as well.Mark seems the most open minded in the band to more diverse styles of music. Joey grew up loving tons of early glam and the first wave of English and L.A./west coast punk. As well, Joey’s always had a great love for tons of 70’s soul, funk, some disco and of course southern rock.

HMA: Acid King covers have a sensual and dark, almost like a bad trip if you will. What is your artistic vision and philosophy?

Acid King: The initial love for heavy music in general helps to create the base for the sound and the fact that we are very slow and methodic in the development of the songs adds the sense of layers to our music. It literally takes years for us to write songs. We’re currently into the 8th year since our last album and the writing started soon after the last album was released. Also life’s trials and travails can be an incredible backdrop for the moody undertones that underly our sound. I have to admit that Lori and I do have a dark streak that we have in common and that helps. Mark helps to keep everything light.

HMA: Off course a bad trip is not a bad trip for everyone, how would you describe your visuals and album covers?

Acid King: The source of inspiration for our artwork has come from many places and collaboration from and with many very talented artists. We really scored with the video graphics from the head artist with Walter and team at Roadburn Festival. Definitely dark imagery with satanic rituals, biker rides and slothful icebergs etc. Basically anything massive, slow and brutal.

HMA: What are your views when it comes to experiencing music and the visual arts?

Acid King: It’s got to be sincere and can’t be wimpy. We like lots of dark and or dense colors and anything to do with sex and drugs and rock n’ roll………….

HMA: Our favorite cover is from your EP “Down with the Crown”. It has a 1970” ritualistic feel, very sensual and dark. Can you tell us how the concept developed?

Acid King: You mean the naked chick w/ the pentagram on her chest? I can remember Frank Kozik saying to Lori ‘ So like I had this photo shoot w/ this chick with her shirt off and a pentagram painted on her tits. She’s hot and we were going to use it for something and they decided to use something else. So like,,,,,, do you wanna use it?’ Lori didn’t blink and said ‘totally’.

HMA: The EP “Free” is completely different from “Down with the Crown” as well as your other releases, but the sensuality, dry desert road, Americana crash helmet, bell buckle…. all held together by a female bike rider. Are these elements coincidence or they have a message/intention?

Acid King: Lori never minces her message. It’s spot on. We had just gotten Guy Pinhas from the Obsessed (Wino’s old band who we also played with on this past European tour at Hellfest) and this was our first recorded effort with him. He definitely added a new element to the band. Guy is a great bassist and I am glad we got to play with him.

HMA: I believe you are based in San Francisco, is Anton LaVey house still open? Have you been?

Acid King: Of course we’ve been there but it was tore down after he died. It was out in the Avenues and was just a regular dingy black (that almost looked grey due to never being painted) house. I believe Guy’s roommate was good friends with one of Anton Lavey’s daughters. His roommate had a lot of Lavay artifacts on the wall of their house and I remember waking up in their living room dreaming the song ‘Hotel California’ blasting through my head. I distinctly remember waking up very happy and with a total smile on my face. Good times.

HMA: How come your logo has never been defined into just one style?

Acid King: Nothing ever stays the same except change. We’re not into branding and just do what we feel like; when we feel like it. I think that’s why Lori and I have stayed together for so many years (going on 20 years in 2013!!)

HMA: You latest release dates back from 2006, any plans for future release?

Acid King: All the music is currently being practiced we just need to finish off some vocals. We’ve even played 3 or so songs on tour and at local SF shows. They’re sounding good. We hope to be tracking by Spring of 2013.

HMA: Who is going to take care of your sleeves?

Acid King: Who knows. You have any suggestions?? 🙂

HMA: What is art scene nowadays in the Bay Area/San Francisco?

Acid King: It seems to be coming back alive. Of course a lot of the art seems to be influenced by graffiti art and of course there are tons of murals all over the city. Oakland has seemed to be the hub of a thriving and developing music and especially underground metal scene.

HMA: Thanks for your time… and do you have any final words?

Acid King: Thanks for the time and folks you’ll be hearing a new Acid King album before you know it. Never mess with the King!!!