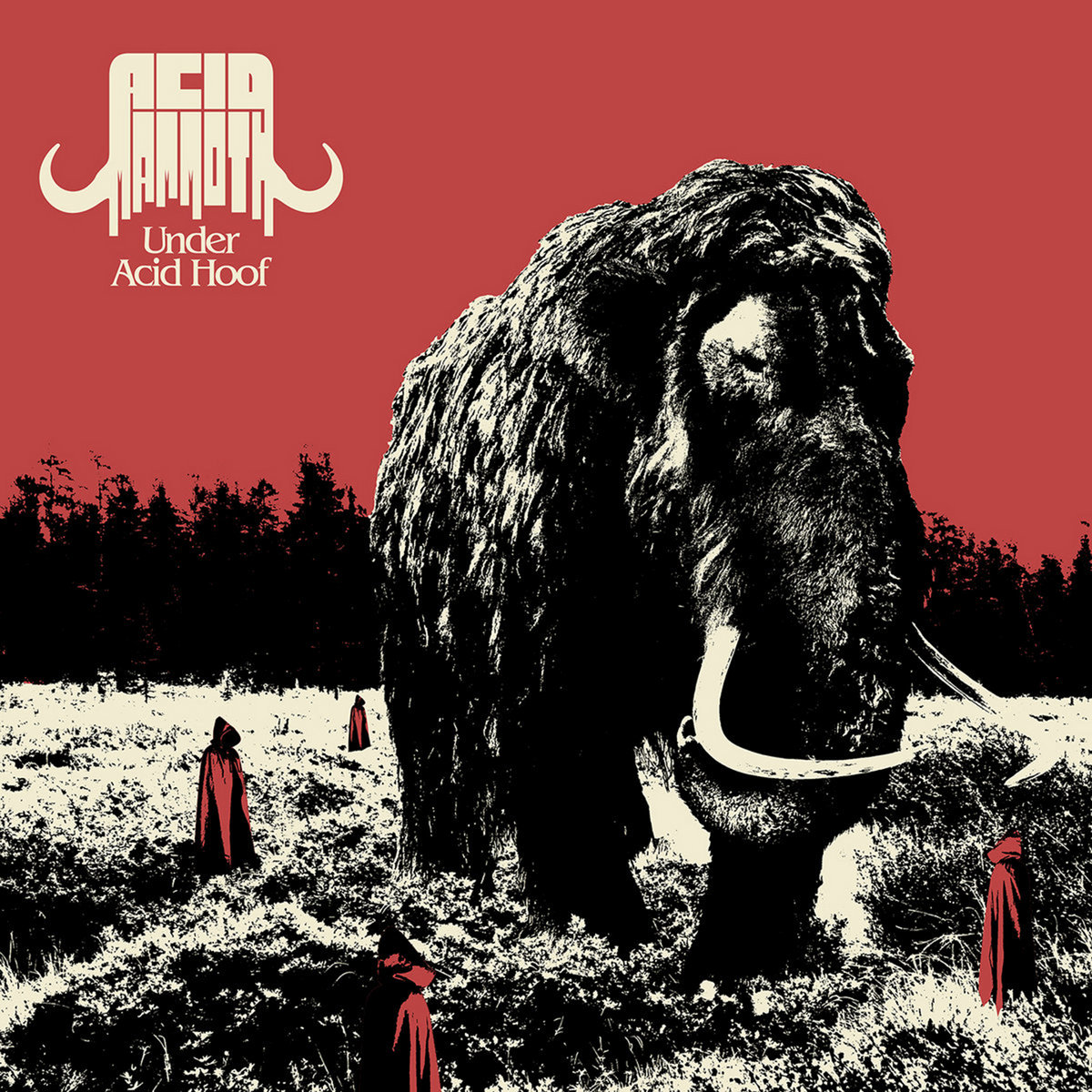 Acid Mammoth is a Doom Metal band from Athens, Greece. The band was formed by Chris Babalis Jr. (Vocals & Guitars) and Dimosthenis Varikos (Bass) in 2015. Great friend since childhood, with a great love for Sabbath and other heavy music. In 2016, they were joined by their very good friend Marios Louvaris (Drums) and Chris Babalis Sr., Jr.’s father. In 2017, the band self-released their self-titled debut album. In late 2019 the band signed with Heavy Psych Sounds Records and in 2020 released their second album, “Under Acid Hoof”. In 2020 the band also released a split alongside Italian Doomers 1782. In 2021, the band releases their third full-length album, ‘Caravan’ with Heavy Psych Sounds, alongside a repress of “Under Acid Hoof” and the first-ever press of their self-titled debut.

We are a Doom Metal band from Athens, Greece. We have a deep appreciation of slow, heavy riffs reeking fuzz, accompanied by slow, intense drumming and witchy vocals. As big fans of horror ourselves, our lyrics dwell deep into the horror genre. You can expect tales of witchcraft and the occult, mammoths and rituals, witches and Sabbaths, as well as a cosmic sense of horror deeply inspired by literature and cinema.

When composing music, we always strive for creating something that speaks to us, both on a musical and a personal level. In our songs, every single second of music means something to us. We are not fans of filler songs, putting pieces or musical parts in the album that we are not one hundred per cent happy with; therefore, we have always preferred quality over quantity. We always strive for the best possible outcome for every song, riff, or lyric. For each song and album, our goal is always to create something heavy that relates to our previous albums but at the same time takes the band forward. We are huge Black Sabbath fans, and that is quite noticeable in our music, but at the same time, we are doing our own thing, presenting our version of doom, the way we feel it in our ears and our minds.

Our music reflects other great bands who first set the standards for our genre. But we could look at ourselves as the ‘torchbearers’ who carry the flame one step further but yet moulding the genre in our way with our vision and concepts. And, of course, we must keep the heavy ‘n’ fuzzy low tuned riffs alive and kicking.

What are our favourite album covers? We will go with a classic. Well, the most classic of them all. “Black Sabbath” by the masters themselves, Black Sabbath. It is such a strong cover. It’s like I have lost my way all alone in the woods, and I have stumbled upon an old watermill. Gazing at my reflection in the water, I see something slowly emerging from the bottom.  A mysterious witchy-woman wearing a black cloak reveals her presence, who looks as she has come from a haunted underworld. She stands there staring out at me, and at that moment, I hear the sound of a tolling bell in the distance, which sends out chills to my body. “What is this that stands before me?” For us, Black Sabbath’s cover can never be repeated, recreated, or topped. It is *the* album cover, and it exhibits everything that we love about this music.

We have always been very passionate cinema lovers, especially in the horror genre. This has greatly influenced the band’s music and our overall aesthetic and themes. From the old black and white to the 80s and 90s, all these movies have had a significant impact on us, and we just love watching them. Watching one of these movies is enough to fill us with ideas and inspiration to actualise in writing new songs. Lyrically, they can provide the overall concept, and musically they can provide the overall vibe that will turn into a riff or an entire song.

There is a loose lyrical concept that we follow for this album, but at the same time, each song has its character and vibe. This album is not exclusively about witches and the occult. This album still incorporates these same concepts, but at the same time, it transcends, taking us to the astral plane. A “witchy mammoth caravan” that embarks on an endless cosmic journey. Each song focuses on a particular stage of this cosmic journey, sharing what is seen and felt.