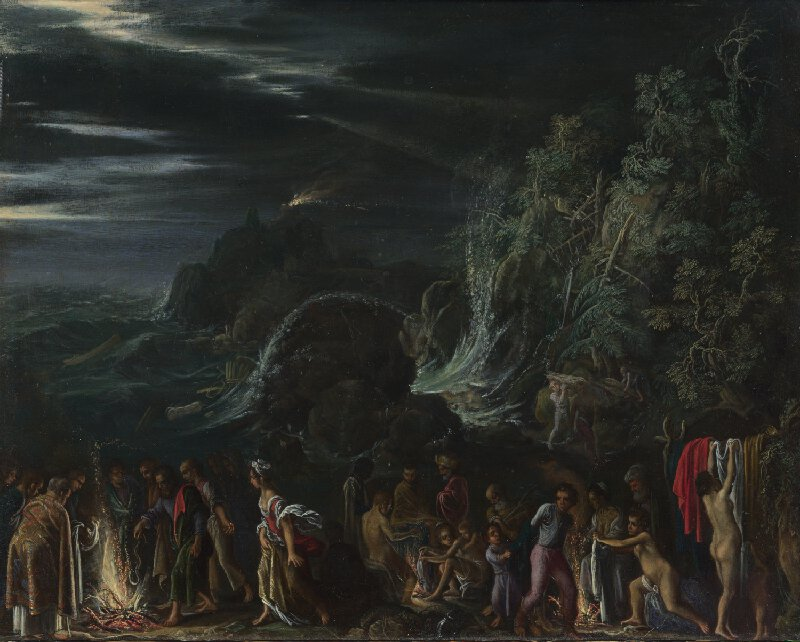 His perfectionism, and an apparent tendency to depression, resulted in a small total output, despite the small size of all his pictures. In all about forty paintings are now generally agreed to be by him (see Kressmann below). He made a few etchings, not very successfully. However, his work was highly regarded by other artists and a few important collectors for its quality. He had a clear and direct influence on other Northern artists who were in Rome such as Paul Bril, Jan Pynas, Leonaert Bramer and Pieter Lastman, later Rembrandt’s master, who was probably in Rome by 1605. Rembrandt’s first dated work is a Stoning of St Stephen which appears to be a response to Elsheimer’s painting of the subject, now in Edinburgh. Some works by Italian artists, such as the six pictures from Ovid by Carlo Saraceni now in the Museo di Capodimonte, Naples, also show Elsheimer’s clear influence. Rubens, who owned at least four of his works, knew Elsheimer in Rome, and praised him highly in a letter after his death.

In a wider sense, he was influential in three respects. Firstly his night scenes were highly original. His lighting effects in general were very subtle, and very different from those of Caravaggio. He often uses as many as five different sources of light, and graduates the light relatively gently, with the less well-lit parts of the composition often containing important parts of it.

Secondly, his combination of poetic landscape with large foreground figures gives the landscape a prominence that had rarely been seen since the Early Renaissance. His landscapes do not always feature an extensive view; often the lushness of the vegetation closes it off. They are more realistic, but no less poetic, than those of Bril or Jan Brueghel, and play a part in the formation of those of Poussin and Claude. His treatment of large figures with a landscape backdrop looks forward, through Rubens and van Dyck, to the English portrait in the eighteenth century. Soon after his death he became very popular with English collectors, notably King Charles I of England, the Earl of Arundel, and the George Villiers, 1st Duke of Buckingham, and over half his paintings have been in English collections at some time (nearly one third are still in the UK).

Thirdly, his integration of Italian styles with the German tradition he was trained in is perhaps more effective than that of any Northern painter since Dürer (with the exception of his friend Rubens). His compositions tend to underplay the drama of the events they depict (in noticeable contrast to those of Rubens), but often show the start of moments of transformation. His figures are relatively short and stocky, and reflect little of classical ideals. Their poses and gestures are unflamboyant, and their facial expressions resemble those in Early Netherlandish painting rather than the bella figura of most Italian Renaissance work.