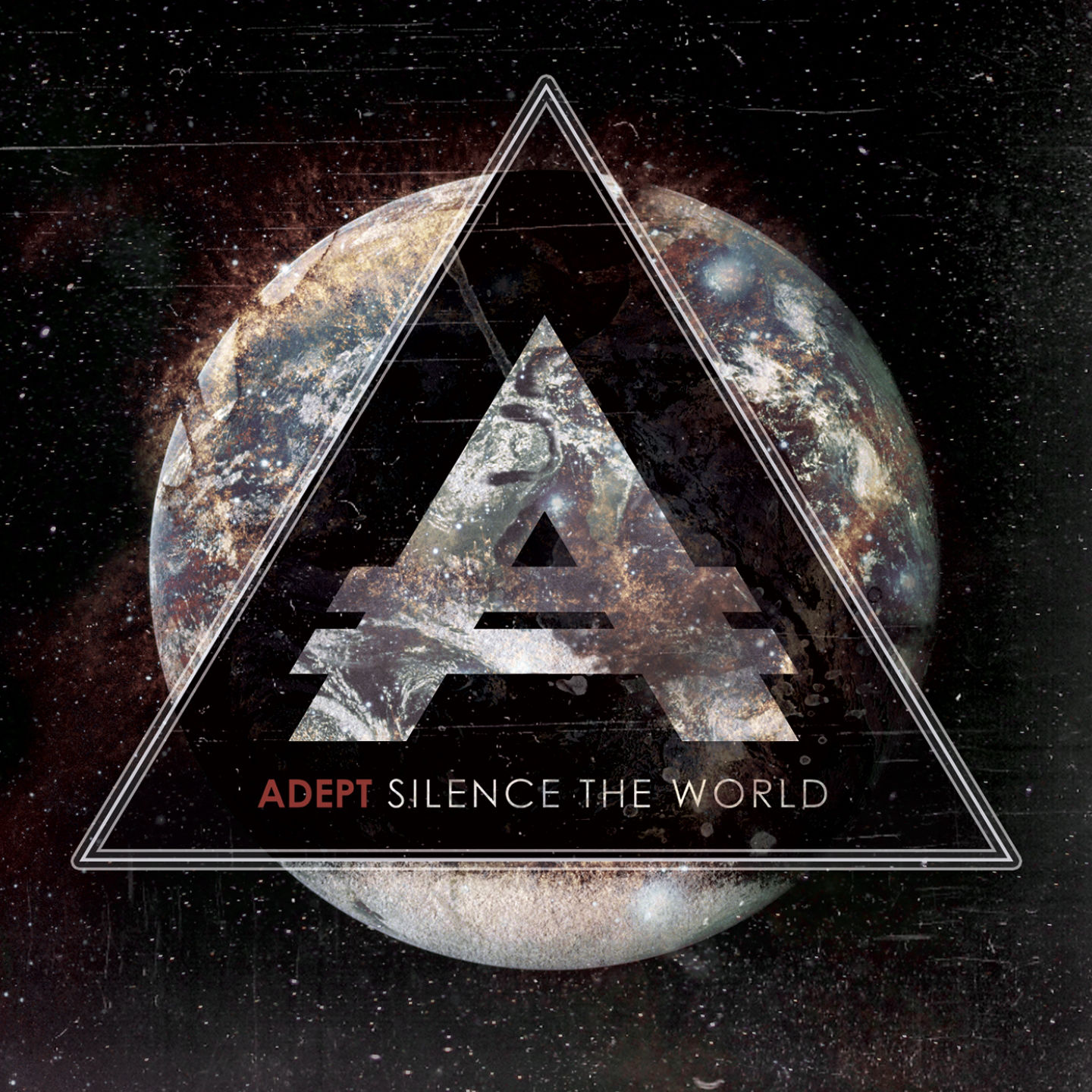 April this year has seen the release of Adept’s third album which has been making some tsunami sized waves so far in the Swedish metalcore scene. In the wake of their newest effort comes a winning formula crafted from a fresh look at their approach to song writing. Having had the pleasure of bigger gigs and increased audiences of late, ‘Silence the World’ is awash with punchy, sing along choruses designed for ears attached to those in the crowd. If you don’t have the pleasure of standing before them amongst a raging mass of mosh crazed hooligans then the mighty Fredrik Nordstrom has catered for your iPod needs by producing some huge guitar sounds and driving melodies in this extremely neat production released on Panic and Action records.

But this hasn’t just come from sitting around in a cold Swedish basement endlessly rattling away on their instruments. Being the young gun slingers of their genre, they’re driving ever faster up the asses of bands such as In Flames and Arch Enemy – but not with the blind adolescent foolishness of a chav boy racer – according to vocalist Rob, they’ve made their most recent and successful headway by maturing as people and musicians, thus proving their capability to become a headline act alongside their idols.

Since 2009 they’ve been progressing steadily towards this goal, and word is that this just might be the album which sees Adept smash it to pieces.

HMA: So, you’ve just released ‘Silence the World’, which is your third album and has so far been received with lots of praise.  Some reviews have mentioned that this album may be the bridge for Adept to reach a more big-time status as a band and be up there with the front-runners of the Swedish hardcore scene.  How do you feel about that?

Rob: Well we tried to write an album that should mostly be a more sing-able version of our previous albums, so we wanted to make songs that work well as live songs. We’ve been touring for a couple of years now and after a while you can see what songs, and what parts of songs, go really well with a live audience, so we tried to put in a lot of big choruses, a lot of punchlines and a lot of sing-alongs to make us better live than we were before because that’s the most important thing about being in a band, you know. I think everyone can put out a solid album but it needs to involve the people who come to see your band, so I think we wanted to make a big album in the sense that it has to be bigger live.

HMA: What kind of influences have you taken from your previous two albums to make ‘Silence the World’?

Rob: Well, when we started out with the first album we were really into those early 2000s bands that had big choruses and big guitarists, but I think we’ve all grown up as a band, not only with music but as people, so I think we’ve matured a little bit because we don’t use those kind of childish lyrics we used to have. I think influence-wise it’s pretty different between all members of the band, but I think we’ve been thinking about a lot of Biffy Clyro’s stuff and a lot of those arena bands, for some reason, because it doesn’t sound like us at all but we’ve been listening to the structures of their songs and how you can make four chords sound so huge, so I think we’ve been concentrating on how we can arrange songs.

HMA: There’s a song on the new album called ‘Established 2004’ which sounds like it has a very strong punk rock influence to it…

Rob: Yeah, that song is a little bit of a tribute to our band and all the struggles we’ve been through, we’ve also had a couple of member changes, also some bad luck in the band and stuff like that. It’s a pretty fast-forward song with a lot of layers of vocals on it and we’re just trying to explain what’s been happening in the band for the last couple of years.

HMA: Your first single release ‘Secrets’ is currently doing very well on Youtube with over 100k hits already. Is there a second video being released soon?

Rob: Ah yeah, well actually we have two more songs we plan on releasing, so hopefully people will enjoys those videos as well. I Mean, ‘Secrets’ is a really low budget video because we had the chance to spend all our budget on one video or try to make a couple of smaller, low budget videos but still try to keep them looking kind of cool.

HMA: Your band’s been recognised for using and utilising a lot of different sub-genres, have you brought anything new to the table in this respect with ‘Silence the World’?

Rob: Well yeah, there’s always gonna be new influences on anything you create but we tried to go a little bit darker on this album and it’s a little bit heavier than our previous albums we’ve done even though the songs have a bit more melody. So we also wanted to capture that in our videos too, I mean, you can barely see us in ‘Secrets’ [laughs] but actually I think that reflects on how the album is sounding in general.

HMA: I heard you guys are sponsored by Samuel Adams?

Rob: [laughs] Well, I mean, yeah we used to drink the beer a lot and we got some endorsements on them but I don’t think we’re endorsed by them anymore, I think it stopped.

HMA: Drinking too much?

Rob: [laughs] Well… I dunno. We used to drink a lot but Samuels Adams is a pretty expensive beer in Sweden so we couldn’t drink that as much – it was more moonshine.

HMA: The knarly stuff [laughter]. So you say you’ve grown up more as a band these days, how are you different now to what you used to be? What kind of lessons have you learnt?

Rob: I think a lot of things changed when we got on really big tours and we got to play big festivals in front of lots of people who wanted to see us so it made us realise that what we do actually affects people. You know, it’s not like we took anything for granted, we played because it was fun. It sounds like a cliché but we didn’t care if there were 20 people in the audience or 200 because we just love to play music but then all of a sudden we got really good spots at festivals on really big stages so I think we just suddenly just said to each other “what the fuck are we doing? We can’t fuck this up” because there are so many people wanting to see us so we need to change our general behaviour. I think everyone took a look at themselves and tried to improve on everything, and I think this is reflected pretty well on this album, I started to scream better and Gabriel did amazingly on the drums and I think we all got a little bit more spot on on all our instruments as well as our live performances.   So I think that’s the difference between now and then, we just grew up a little bit.

HMA: Do you see yourselves as professional musicians now whereas before it was more just having fun?

Rob: Yeah of course, although we still have a lot of fun, it’s not that, we just used to be like “ah fuck it, let’s see what happens” and we could party a lot before shows and we could book or miss shows, even festival shows and we’d be like “ah fuck, we should have played” so it’s amazing that people still support us. We’re trying to do much better shows and hopefully people will see that we’ve become a lot more professional

Rob: Yeah we’re gonna start in the UK then do mainland Europe and a couple of festivals. The UK is one of those places we haven’t toured as much and it’s really hard for us to get recognised because the music scene is very strong and you have to stand out, especially because there are also a lot of bands from Australia and the states that are coming in, so for us to come from Sweden it’s hard for us to break in. We want to tour and tour the UK and see what happens because we really want to see if we can make it there.

HMA: Ok Rob, well I think that’s about it but before we go is there anything you’d like to say to the good readers of Heavy Music Artwork.com before you go?

Rob: Yeah I just want to say that I hope there are some people in England who’ve listened to our album that want to give us a chance and they should come out to our tour of the UK and see what kind of live band we are and hopefully they’ll continue coming to see us the next time we come out, we’re looking forward to that.

HMA: Thanks a lot and see you on tour in April.