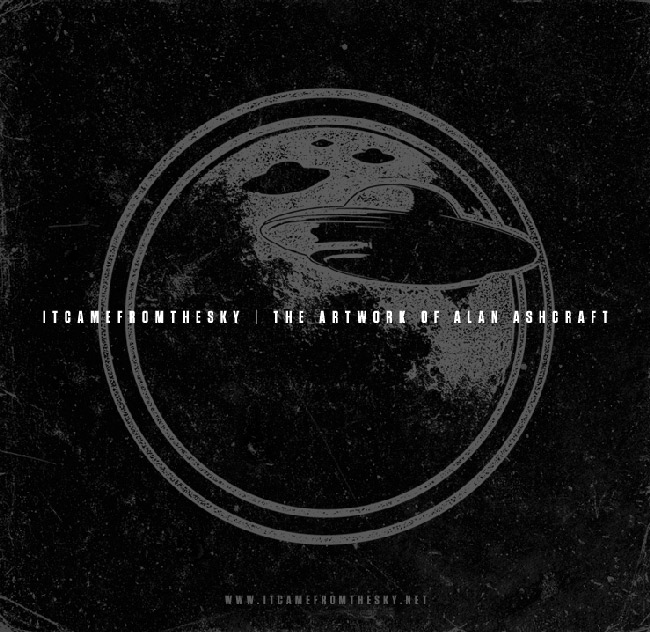 Interview with Across the Sun, Alan Ashcraft – Designer & Musician

Alan Ashcraft is a young graphic designer and commercial artist located in the Pacific Northwest. Over the last 8 years, he’s designed merch, album artwork, tour posters, and even skate decks for several bands, solo artists, and record labels. Although a large majority of his artwork is commissioned by various contacts within the entertainment industry, he’s also worked with clothing companies, independent organizations, and small businesses.

HMA: You are also playing drums for “Across the Sun”, would you say that by also being in a band you are able to better understand client needs and demands?

Alan Ashcraft: Absolutely. There are several elements to being in an active band that I think are lost on the pedestrian graphic designer. The biggest of which is, experiencing the financial burden that comes with touring, printing merch, etc.

HMA: How do you juggle the time by being in a band and working as a designer?

Alan Ashcraft: It’s difficult, but they work together very well most of the time. I have a MacBook that I use to design while we’re on the road. As of lately, we haven’t toured much, so it hasn’t been much an issue. Being in a band and constantly meeting new people, whether it’s fans of our music or the bands we have toured with, has opened so many doors and given me the opportunities to work with some really great people.

HMA: In your artwork we find planets and empty spaces, is there a reason for this? What inspires your creativity?

Alan Ashcraft: I’ve always been fascinated by space, mountains, clouds, etc. From an artistic perspective their monstrous and seemingly infinite presence makes them ideal for creating breathtaking visual design. So much of the environment that I find myself in everyday, inspires me. My mind is constantly viewing objects for their creative worth rather than their practical worth. I think that’s a small part of what separates a creative minded individual from a non-creative minded individual.

HMA: Do bands give strict directions or interfere with the creative process?

Alan Ashcraft: It happens much more often than I would like. When a potential client gives me an unnecessarily complex design brief, I find myself losing the passion that I would normally have for a project that gives me more artistic control. At the end of the day, I’m being hired for my creativity and my proficiency with creative visual software, not just the latter.

HMA: What would you say is the biggest challenge as a designer in such a competitive environment?

Alan Ashcraft: Honestly, the most difficult challenge is attaining the opportunity in the first place. Every potential client knows someone who knows someone who pirated a copy of Photoshop, and end up deciding to work with them since they’re familiar, and more often than not, ridiculously cheap. Neither of those criteria ever result in professional artwork. It’s similar to calling someone a mechanic, simply because they own a screwdriver.

HMA: It seems like nowadays bands are spoiled for choices and talent to compliment the music. Do you find yourself in a better place since you are also part of the industry with “Across the Sun”?

Alan Ashcraft: Definitely. My role in the band gives me a succinct advantage in knowing what the band wants visually, as a whole. Receiving critiques and revision requests is also much easier since I’m with those guys a lot of the time anyway.

HMA: What are your methods of work in terms of techniques and workflow?

Alan Ashcraft: I normally just sketch out any initial ideas I have, and execute the best ones first. I’m a huge perfectionist, so I like to revisit a design a day or two later with fresh eyes and make any necessary tweaks before sending it in for approval.

HMA: Do you work better in vector art or photo manipulation?

Alan Ashcraft: I work pretty well with both, but photo manipulation is what got me into graphic design. I’ve always felt like there’s a lot more depth in that medium.

HMA: The software of choice these days is the undisputed, unsurpassed and unquestionable Adobe Photoshop… do you use plug ins or any other form sorcery to assemble the work of the devil?

Alan Ashcraft: My favorite plug-in is my crippling self-hatred for my own work. Haha. Staying unsatisfied and disappointed in my abilities keeps me humble, and hungry. In all seriousness though, I have a few PS Actions I put together, but beyond that. My software is pretty standard.

HMA: What are you currently working on?

Alan Ashcraft: I’ve got a few really cool projects coming up. Nothing I can discuss though. 😉

Alan Ashcraft: I’d love to! My one design secret that helps me the most is, focusing on the simple shape or outline of a design before trying to get too fancy with any sort of embellishments. Solidify the flow of each focal point, and make sure that the composition works well with the elements that need to be included. So many designers forget that just because print design is stationary in a physical sense, doesn’t mean it can’t have movement.

Alan Ashcraft: Absolutely! For all the Star Wars fans reading this, you can visit my online store www.lookinforlove.bigcartel.com for some limited edition shirts and prints that I designed.

If anyone would like to stay connected, you can find me at the following social media sites:

Lastly, a HUGE thanks to Alex and Heavy Music Artwork for this opportunity. I love to nerd out with fellow design enthusiasts whenever possible.