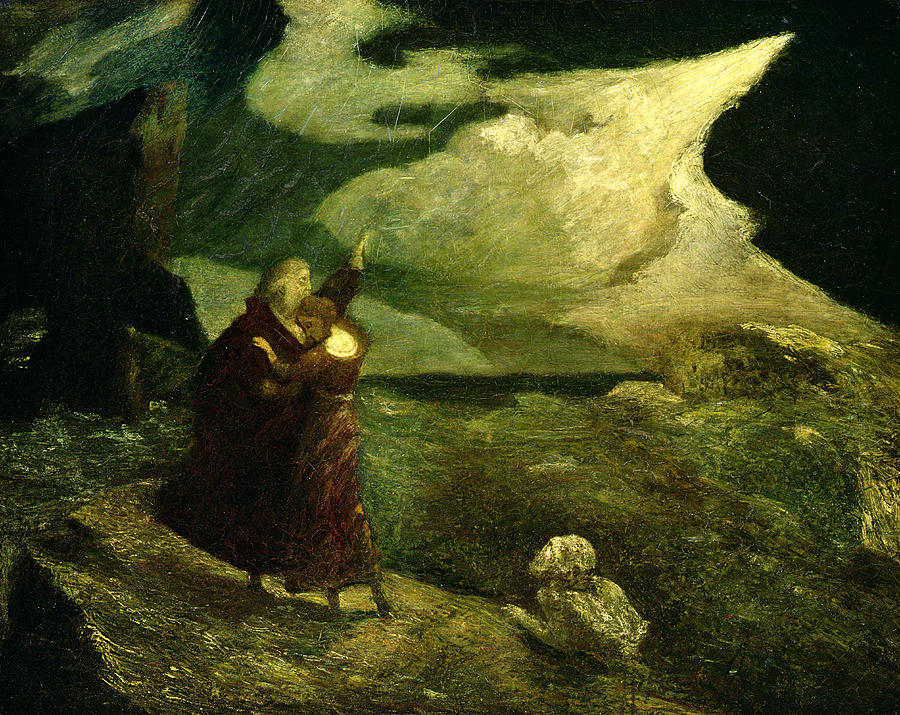 The Spouter Inn, New Bedford, in Melville’s Moby Dick, had on its wall a strange painting, ”thoroughly besmoked, and every way defaced”, with such ”unaccountable masses of shades and shadows, that at first you almost thought some ambitious young artist, in the time of the England hags, had endeavoured to delineate chaos bewitched.” It was ”a boggy, soggy, squitchy picture truly, enough to drive a man distracted.”

Albert Pinkham Ryder (1847-1917) was four years old when Moby Dick was published. Born and raised in New Bedford, he was something of an oddity: a painter who seems to have spent his entire life attempting to realise that one murky figment of Melville’s imagination. There are around 40 Ryders currently on view upstairs at the Whitechapel Art Gallery. Tiny, bitumenised, inchoate pictures, they make a startling contrast to the large, bright landscapes by Michael Andrews (reviewed in this column last week) hung on the ground floor. Boggy, soggy, squitchy pictures truly.

Jonah, often said to be Ryder’s masterpiece, treats a theme close to Melville’s heart, and comes as close as anything in his oeuvre to that fictive painting in Moby Dick. The figures in Ryder’s picture, where you can make them out, are so badly rendered that they are comical. Jonah, struggling among the waves, is a piece of human fudge; God appears to be blessing a Christmas pudding over the horizon. They are suspended in something very like the ”nameless yeast” to which Melville compares the texture of the Spouter Inn painting. Ryder is known to have used dirt scraped from his boots, candle wax and tobacco juice from the large spittoon in his studio to create the unusual, ruinous appearance of his pictures. At least a third of the pictures on display are now all but indecipherable.

Even in Ryder’s own lifetime, collectors of his work noted their unfortunate tendency to turn liquid, to descend in great folds of molten oil paint to the bottoms of their frames. Cracks half an inch wide have developed in many, and the catalogue to the Whitechapel show quotes an unusually plaintive conservator’s report on one of his most irredeemable murks: ”There is absolutely NO way of guaranteeing the stability of this structure – it will never and can never dry out. It resembles shale interspersed with puddles of sticky oil. It is bound to flow again.”

Yet what makes the Strange Case of Albert Pinkham Ryder so very strange is that this creator of un-mitigated technical disasters should be remembered as one of the great artist-pioneers of American mod-ernism. Roger Fry, no less, acclaimed him as ”an undeniable genius”, and when the Armory Show intro-duced avant-garde European art to New York in 1913, Ryder was the only American artist deemed worthy of inclusion.

Ryder was not quite the freak of turn- of-the-century painting he is often said to have been. His ambitions for his art relate fairly closely, for example, to those of the Symbolists and other fin de siecle painters. ”Have you ever seen an inch worm crawl up a leaf or twig,” he once wrote to a friend, ”and then, clinging to the very end, revolve in the air, feeling for something to reach something? That’s like me. I am trying to find something out there beyond the place on which I have a footing.”

The ambition to express the inexpressible, to evoke somehow in images the vaguer and more other-worldly impulses of the human spirit, might be said to connect Ryder with artists as disparate as Gauguin, Moreau and Ensor (although he seems even closer to English mystics like Blake and Palmer). His odd, vit-reous little paintings, buried under layers of glaze and what-have-you, take for their subjects the kinds of story very popular with artists in the late nineteenth century. Winged horses and star- crossed lovers struggle through the curried territory of paintings like Little Maid of Acadie or Lord Ullin’s Daughter.

Ryder’s claim to importance rests on what he did with this unexceptional subject matter – his incarcera-tion of figure and landscape in that extraordinary plasma, that pictorial gunk, which became his signature. Looking at The Lorelei, for instance, a picture of moon, rocks and storm-tossed sea that resembles an im-perfectly assembled jigsaw puzzle (thanks to the craquelure that has spread across its ravaged surface), it is not hard to understand why Ryder has been acclaimed as the first American abstract painter. The things he is painting, after all, look so incidental to his true concerns: the figure of the Lorelei herself, tempting sailors to death with her siren song, has been obliterated by Ryder’s obsessive overpainting and glazing. With its bizarre, melted-marshmallow profundities, its Chicken Korma murkiness, this is art that wants to express mood and nothing else.

Later generations of American artists were quick to seize on this aspect of Ryder and to see in it a pre-figuration of their own faith in a purely abstract art. He became a hero to the first generation of New York School painters. Franz Kline summed up the appeal of his work when he commented that ”Nobody can ever look at a boat by Ryder – like a hunk of black tar – and say to me that a boat ever looked like that! The final test of painting is: does the painter’s emotion come across?” Jackson Pollock, for his part, announced that ”The only American master who interests me is Ryder”.

This begins to explain why a painter – let’s face it – as third-rate as Ryder is still regarded as a figure of considerable historical importance. Yet there is another and perhaps still more convincing explanation for Ryder’s unlikely position of eminence in the history of American art. And this has less to do with the ampli-tude found in him by later generations than the emptiness.

John Updike, in a brilliant essay on Ryder published last year, suggested that his art appeals to a fun-damental Puritan streak in the collective American mind. ”Puritanism, which continues to shape our aesthetic sensibility if not our personal behaviour, values sincerity and prefers, to a suspect facility like John Singer Sargent’s, an awkwardness, an evident conquest of difficulty, like Ryder’s. In its world-hating heart, Puritan-ism admires, as ultimate proof of sincerity, self- destruction . . .” Take this argument a little further and you end up with the interesting possibility that what Ryder’s example really seemed to justify, for later American artists, was their own Puritan distrust of images.

The history of American art since the Second World War has, if you look at it from a certain point of view, followed a Puritan, ”world-hating” logic. It is a story of exclusions and purges, from Abstract Expressionism (no more figurative references) to Pop (no more emotions) to Minimalism (even less of either) and beyond. It is, paradoxically, a visual tradition built on iconoclasm, each new generation paring the art object down to a still more stripped and reduced form until – at a point in the late 1960s – the art object itself was done away with. Ryder has become central to this Puritan tradition of American art and thought about art. He wanted his paintings to look distressed, ravaged by time; he loved the effects of decayed Old Masterliness. His are paintings that seem to long for – indeed, that have been devised to ensure – their own destruction.

This is why – although it may seem a perverse thesis – Ryder is the forefather of an artist like Lawrence Weiner, the American conceptualist and purveyor of Word Art currently exhibiting at the ICA. Ryder’s art as-pires to the condition of non-existence; Weiner, in 1969, invented what could be described as the first non-existent work of art.

Weiner, whose ICA installation simply consists of a few sentences stencilled to the walls of the gallery, carved his niche in American art history when he typed up the following text in 1969: ”1. The artist may con-struct the piece. 2. The piece may be fabricated. 3. The piece need not be built. Each being equal and con-sistent with the intent of the artist the decision as to condition rests with the receiver upon the occasion of receivership.” This was, Weiner said, a work of art. And yet it also wasn’t, since all it leaves you with, in the end, is the suggestion of one, the faintest glimmering of an idea: the perfect culmination, in other words, of American aesthetic Puritanism.

Weiner’s work has gained little in amplitude. At the ICA, his sentences – painted on the walls, not by him, but by anonymous gallery technicians, a Weiner Werkstatte – are simple phrases describing actions that might be performed with unspecified materials: ”Hit hard (&) / Just over there” is characteristic. The ICA’s exhibition guide tells you that ”Weiner considers the stance of the artist who imposes an art object upon the audience to be restrictive, even authoritarian”, and emphasises his ”concern for the response / input of the recipient”. One recipient has written his response / input on the wall of the Gents’ at the ICA, and a neat anti-Weiner Weinerism it is too: ”Some shitty conceptual art / Just over there.”

Ryder and Weiner have mediocrity in common, but that is not to say they are without importance. Ryder initiated, and Weiner brought to its conclusion, one of the most significant – and, in the hands of certain major American artists, fruitful – traditions in the art of this century. The problem is that, in retrospect, this was always a tradition that was going to run into difficulties. In the 1960s, there was a joke about New York School painting that went like this: ”Barnett Newman shut the door, Mark Rothko pulled down the blinds and Ad Reinhardt put out the lights.” Lawrence Weiner did the only thing that remained to do: he left the house.