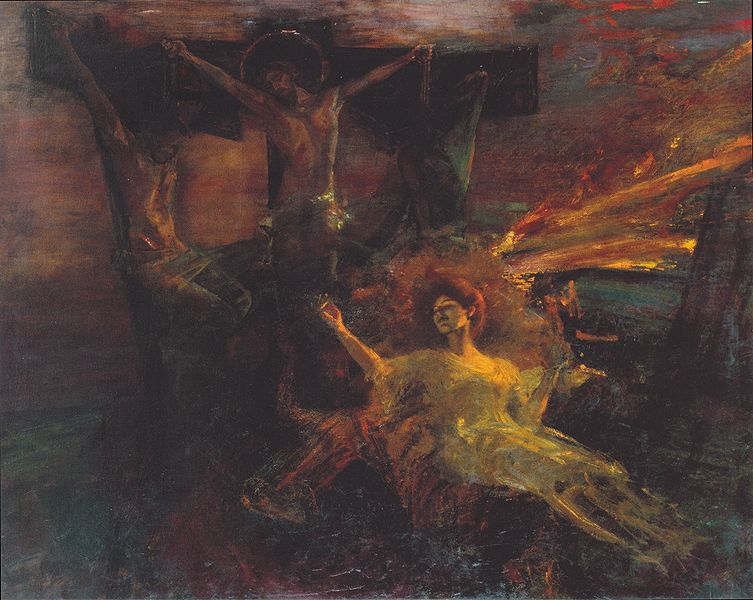 He was born at Gais, in Switzerland; he studied at the Munich Academy under Lenbach and Ramberg, and must be counted among the leading colourists of the modern German school. Travels in Italy, France, England and Holland, and a prolonged sojourn in Paris, helped to develop his style. He was awarded gold medals in Munich and Berlin, was made professor at an honorary member of the Munich Academy, and was decorated in 1898 with the Order of the Bavarian Crown, which conferred upon him nobility.

His scenes of society life, such as the famous “Dinner” (1890), are painted with thoroughly Parisian esprit, and his portraits are marked by the same elegant distinction. He was particularly successful in the rendering of rustling silk and satin dresses and draperies. His historical and imaginative works were as modern in spirit and as unacademical as his portraits. As of 1911, at the Munich Pinakothek was his painting “Jairi Töchterlein” (Raising of Jairus’s Daughter, 1886), while the Königsberg Museum contained his “Roman Bath”, and the Liebieg collection in Reichenberg the “Audience with Louis XV”, the first picture that drew attention to his talent, exhibited in Vienna in 1873. Among other important works he painted “Faustina in the Temple of Juno at Praeneste”, “The Witches Sleep” (1888), “The Judgment of Paris”, “The Happy Sister”, “Temptation” (1892), “Autumn” (1893), “An Adventure” (1896), and “The Crucifixion”.