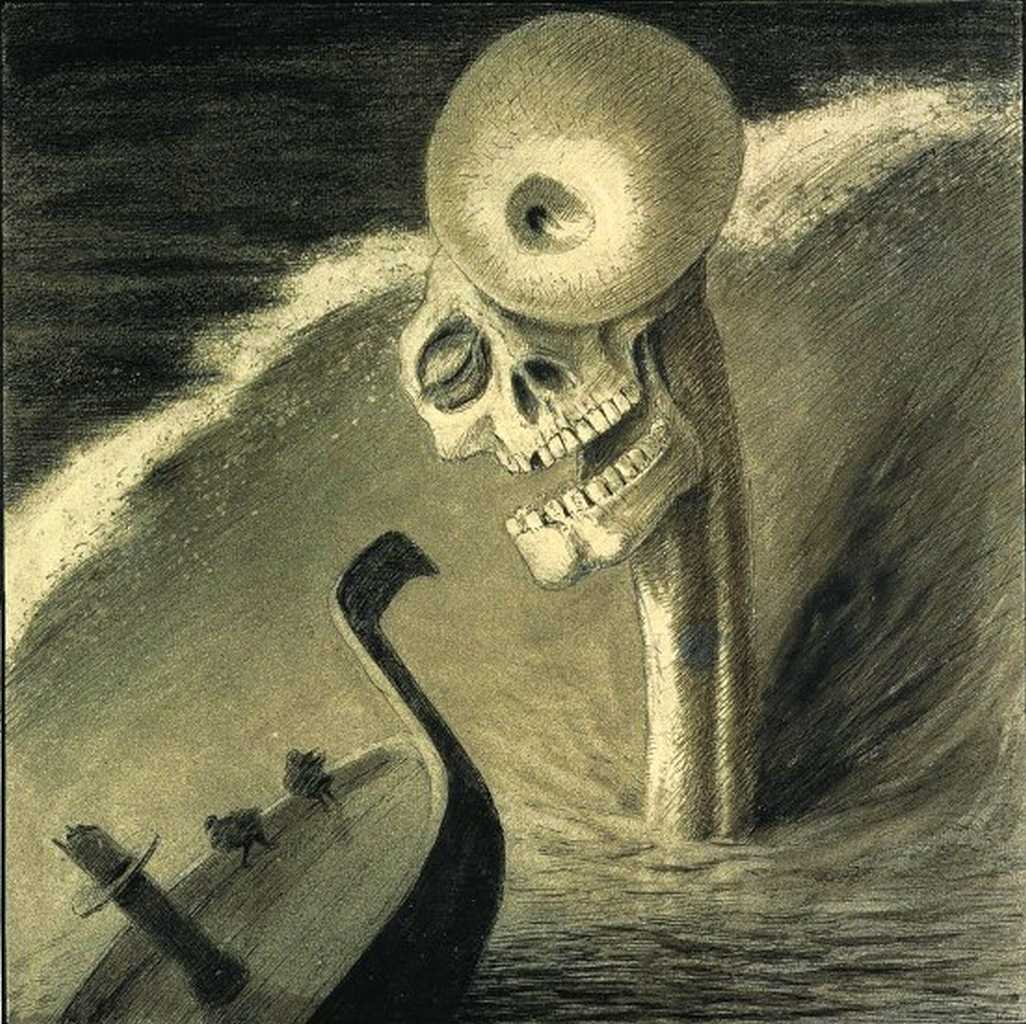 Alfred Leopold Isidor Kubin (10 April 1877 – 20 August 1959) was an Austrian printmaker, illustrator and occasional writer. Kubin is considered an important representative of Symbolism and Expressionism.  Kubin was born in Bohemia in the town of Litomice, which was then part of the Austro-Hungarian Empire. From 1892 to 1896, he was apprenticed to the landscape photographer Alois Beer, although he learned little. In 1896, he attempted suicide on his mother’s grave, and a short stint in the Austrian army the following year ended with a nervous breakdown. In 1898, Kubin began a period of artistic study at a private academy run by the painter Ludwig Schmitt-Reutte, before enrolling at the Munich Academy in 1899, without finishing his studies there. In Munich, Kubin discovered the works of Odilon Redon, Edvard Munch, James Ensor, Henry de Groux and Félicien Rops. He was profoundly affected by the prints of Max Klinger, and later recounted: “Here a new art was thrown open to me, which offered free play for the imaginative expression of every conceivable world of feeling.

Before putting the engravings away I swore that I would dedicate my life to the creation of similar works”. The aquatint technique used by Klinger and Goya influenced the style of his works of this period, which are mainly ink and wash drawings of fantastical, often macabre subjects. Kubin produced a small number of oil paintings in the years between 1902 and 1910, but thereafter his output consisted of pen and ink drawings, watercolors, and lithographs. In 1911, he became associated with the Blaue Reiter group, and exhibited with them in the Galerie Der Sturm exhibition in Berlin in 1913. After that time, he lost contact with the artistic avant-garde.

Kubin is considered an important representative of Symbolism and Expressionism and is noted for dark, spectral, symbolic fantasies, often assembled into thematic series of drawings. Like Oskar Kokoschka and Albert Paris Gütersloh, Kubin had both artistic and literary talent. He illustrated the works of Edgar Allan Poe, E.T.A. Hoffmann and Fyodor Dostoevsky, among others. Kubin also illustrated the German fantasy magazine Der Orchideengarten. The best known of Kubin’s own books is Die Andere Seite (The Other Side) (1909), a fantastic novel set in an oppressive imaginary land. The Other Side has an atmosphere of claustrophobic absurdity reminiscent of the writings of Franz Kafka, who admired Die Andere Seite. The illustrations for Die Andere Seite were originally intended for The Golem by Gustav Meyrink, but as that book was delayed Kubin instead worked his illustrations into his own novel.

From 1906 until his death, he lived a withdrawn life in a small castle on a 12th century estate in Zwickledt, Upper Austria. In 1938, at the Anschluss of Austria and Nazi Germany, his work was declared entartete Kunst or “degenerate art”, but he managed to continue working during World War II. Kubin was awarded the Great Austrian State Prize in 1951, and the Austrian Decoration for Science and Art in 1957.