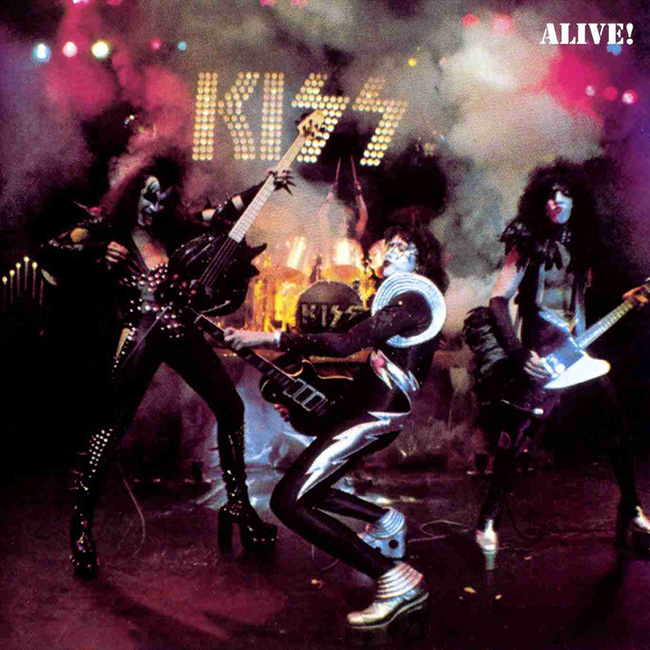 “Alive!” changed everything for America’s favorite masked band, KISS. In fact, this mega-successful double live album, provided the quartet a definitive god-like status as part of the American Hard Rock scene. Furthermore, it paved the way for their subsequent iconic recordings, “Destroyer”, “Rock And Roll Over” and “Love Gun”. The album’s cover sleeve featured a photograph that rapidly became one of the most emblematic images of the band. It presented their classic line-up (bassist/singer Gene Simmons, singer/guitarist Paul Stanley, axeman Ace Frehley and drummer Peter Criss) rocking hard and delivering the goods.

Even if such image perfectly captured the essence of a KISS show and enhanced their  larger-than-life theatrical antics, the truth is that it wasn’t a ‘caught-in-the-act’ moment. Surely, it was shot onstage, but as a carefully star-studded shot that felt, somehow, spontaneous.

“This was done at the old Michigan Palace, in Detroit,” says the still’s creator, legendary photographer, Fin Costello. “I got them to do playback [mimicking] a few times for that shot.”

Costello was initially introduced to KISS by his colleague, Peter Corriston—who was involved with the design of the cover for their third studio album, “Dressed To Kill”. “I had just moved to the USA and had been invited to see them at the Beacon Theater in NY,” he remembers. “I was blown away by the sheer panache of the show and took some pictures which I showed to their manager, Bill Aucoin, the next day. He showed them to the band who invited me to come to Detroit and shoot a show for possible use on the cover.”

Given the photographer’s notoriety for creating staged concert images for other bands, the KISS camp opted for taking a similar route. “I had done ‘live’ covers for Deep Purple, Humble Pie and Uriah Heep, which impressed Gene and Paul, so we talked about doing a gatefold/booklet type-cover, similar to Uriah Heep’s “Live”, if we got the pictures that worked.”

Thanks to the controlled environment and Costello’s keen eye and technical prowess, the resulting photograph distilled an electrifying vibrancy usually found on real live situations. Despite of this, he recognizes it’s not a perfect shot. “From a photographer’s point of view it’s technically all wrong. It’s out of focus for a start but the atmosphere is spot on.”

To this day, he’s still surprised of the many conceptual lectures this photo has spawned.  “A university in New Zealand has produced a book on album cover art and gives this one the whole ‘art speak’ treatment. A lot of the things they talk about I never noticed until I read the piece.”

Ultimately, the final word about the real value and transcendence of the piece has come from the band’s followers. “I always thought that the fans/readers/listeners make better judgments than the critics and this one has been very popular with many fans and even musicians of the following generations. I’m quite proud of it and my association with it.”