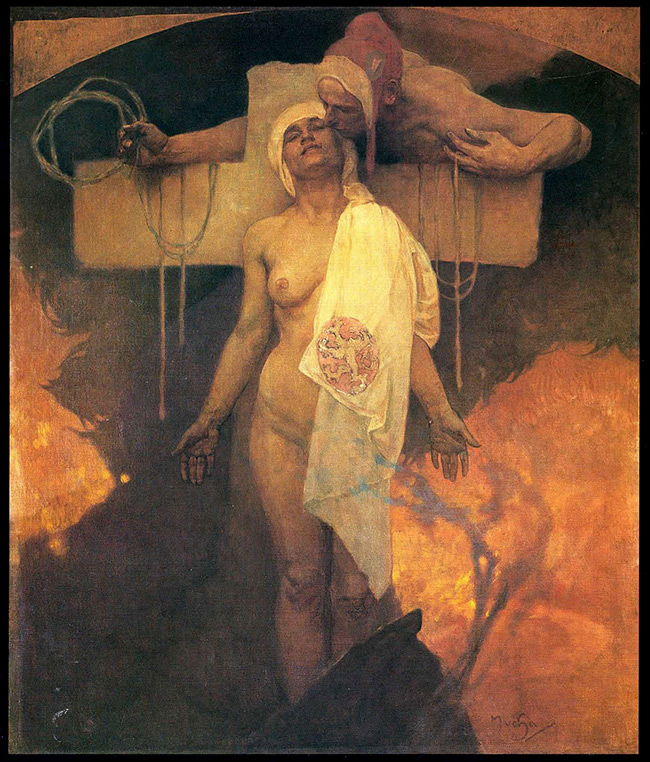 Alphonse Marie Mucha, a Czech-born artist, was raised in a strict Roman Catholic environment, and the religious tradition of rich decoration was later to play an important part in his art. Mucha’s style is marked by a wealth of luxurious details; he used muted colors, gold leaf, complicated and delicate patterns, and intricately intertwined lines-the whole overlaid with a feeling of mystic ritual. As a young man he studied at the Prague Academy of Fine Arts, and later, under the sponsorship of Count Khuen, at the Munich Academy. He came to Paris in 1887 and worked under Lefebvre, Boulanger, and Laurens. Mucha combined the principles of theatrical design that he had learned in Prague with the classical technique taught to him in Paris, and developed from them the elaborate Art Nouveau style for which he is known. In 1889, at the Paris World Exhibition, Mucha first saw Japanese prints, which with their flat surfaces and graceful curving outlines, influenced him deeply. He gradually incorporated those elements into his own art.

In 1892 he executed his first lithographs. In 1894, almost by chance, he received his first commission to design a poster-for Sarah Bernhardt’s “Gismonda”. Thus began a lifelong collaboration with the celebrated actress, who was so delighted with his initial work that she immediately contracted Mucha for six years of poster, set, and costume designs for some of her plays. The posters of Mucha’s mature style were the ultimate expression of Art Nouveau, what with their sinuous lines, subtle colorings and glorification of a feminine ideal. Though is no mistaking the influence of Japanese prints, the poster art of Eugene Grasset, and the Baroque churches of his childhood, it was his association with Bernhardt that molded his style into a art as widely recognizable as it is today.