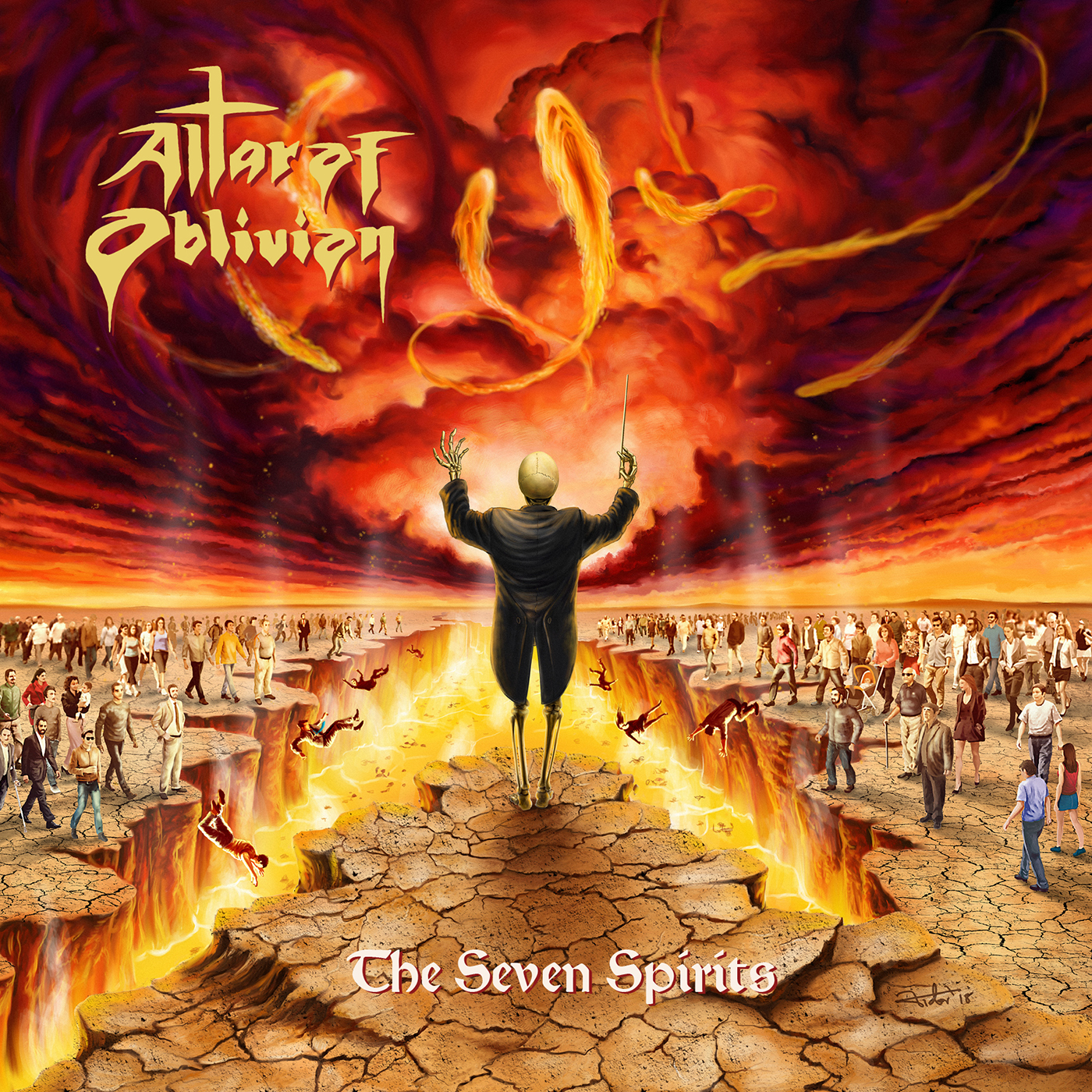 Altar of Oblivion was formed in 2005 and play epic doom metal. The band captures the spirit and atmosphere of this underrated genre in a compelling and credible manner. Like skeletons walking a burning tightrope, this Danish act perfectly holds and strikes a balance between the grandiosity of classical, the down-tuned heaviness of 70s doom rock/metal, the tuneful catchiness of 80s pop music plus the pace and majestic melodies of 80s heavy metal. We encourage the listener to dive into the sinister soundscapes created by this vigorous quintet to experience an atmospheric and melancholic display of grand euphony.

The origins of the band can be traced back to 2004 when Allan (then drums) and I (guitars/vocals) formed a duo carrying the name “Summoning Sickness”. Around a year later, this doubtful project later morphed into Altar of Oblivion and we went from playing simple, old school (black)thrash/speed-metal to epic doom metal. In 2006, I began recruiting members which resulted in bringing former opera-singer Mik “The Mike” Mentor plus bassist/caffeine-addict Christian Nørgaard into our fold.

Our main goal was actually just to play some kind of metal music and when I sat down at home writing material, I came up with some simple riffs, mostly based on the lower E-string, tuned down to D. In 2004, I had only been playing the guitar for half a year and I couldn’t play anything “complicated” or technical. Allan had only been playing the drums for a couple of months so some simple metal seemed one of the only realistic and level-headed approaches to music at the time. During the first couple of rehearsals, we actually tried to write new tracks by jamming but we soon realized it was much easier and faster if I wrote the music at home in order to introduce new songs to the drummer while rehearsing.

The name Altar of Oblivion just popped up in my mind while listening to Coven’s “Witchcraft: Destroys Minds & Reaps Souls” LP whose reverse side contains some kind of sacrificial altar. I’ve always liked the word “oblivion” like it, besides having a somehow nice, round and cold sound, also emanates an aura of ambiguity, mystery, obscurity, secrecy and vagueness. Also, I think the name Altar of Oblivion has a certain flow to it, and thus, I hope it will be much easier for people to make a mental note of it.

The Altar of Oblivion was originally the altar upon which the soldiers and civilians during battles of World War II were sacrificed by their leaders who stopped at nothing to achieve their goals. The word oblivion in this context refers to the soldiers and civilians who perished and sunk into oblivion amidst the horrors of war and compared to the name Summoning Sickness, our current band name is much better suited to our musical and lyrical concept of today.

When it comes to our latest release, a full-length named ‘The Seven Spirits’, I had the liberty to write and organize the album exactly how I wanted, which was a great relief. Earlier, I felt somewhat restrained by the fact that we are a doom band and therefore had to be confined to some strict doom metal rules. For the first time, I didn’t feel that way, which enabled me to incorporate some death-/black-/speed/-thrash-metal elements into the new compositions.

It is hard to say if the album is true to our hearts, but with this album, despite its “flaws”, we are certainly on the right path. Apart from the godly works of Black Sabbath, I have never been into doom metal and/or its subgenres, be it epic, traditional, funeral, black, death etc. If I were to make an Altar of Oblivion album 100 % true to my own heart, it would probably consist of evenly distributed up-tempo in-your-face 80s heavy metal, 80s “tongue in cheese” melancholic synth-elements with some heavy and doomy riffing now and then. As a matter of fact, we have been working on exactly that since the completion of “The Seven Spirits”.

Each time I either listen to our new album or merely think of it, I can’t decide whether to like it for its many positive sides or to discard and dislike it for its lack of what I had envisioned it to be prior to recording it. Compared to our previous outputs, I’m satisfied with the album, and I still think it is our best release thus far.

For the first time in Altar of Oblivion history, we have rehearsed and arranged an album before entering the studio, which apart from a much more secure and spot-on performance, has resulted in a more diverse album with no superfluous sections. I am pleased with the songwriting itself and the instrumental performance overall.

From when I recorded the demo-versions in October 2015 until the final result, only two of the seven songs have undergone a major change: The title song “The Seven Spirits” was originally meant to be an acoustic piece featuring guitars, vocals and keyboards. One day in the rehearsal room, however, the drummer Lars Strøm suggested to convert it into a “regular“ song, after which the first-ever Altar of Oblivion jam-session commenced. An acoustic version of the song still exists, but I admit the drummer’s idea was the right one, as I really like how the title track turned out.

Initially, I had written the ‘Grand Gesture of Defiance’ track to be a 12-minute long closer, but again, our drummer had us convinced to leave out two middle-sections and a long outro. At first, I was sceptical, as I found all of the segments to be killer and almost indispensable, but in hindsight, I can see he was right since this track lacks nothing.

Our newly released album is a seven-track semi-concept album with each track representing a “distinct spiritual being”. “The Seven Spirits” is a Biblical expression and appears four times in the ‘Book of Revelation’ (New Testament), in which Jesus dictates seven letters to the Apostle John, who is instructed to send them to the Seven Churches.

Throughout time, these biblical passages, (along with the rest of the Bible, obviously) have been interpreted in many ways, and a lot of confusion and disagreement exist as to what they actually mean. The lyrical content of this album offers my own personal, alternate and “counterfactual” take on the definition of these particular passages and subjects, among other things the lake of fire, absence of life, end time prophecies, spirit creatures, false prophets, messianic figures, deathbed conversions, impurity etc.

In school, I was truly terrible at interpreting different kinds of texts, books, novels, poems and the like, as I would always base my analysis and interpretation on my somewhat strange perception of the world. I deemed it plain boring, unfruitful, non-artistic and non-creative just to follow the simple patterns, rules and act in accordance with prevailing social standards that were too often served on a silver-plate. Needless to say, my grades were dreadful in those subjects but on the other hand, I was good at other things, such as skipping school.

Despite the fact that ‘The Seven Spirits’ is our most thought-through, thoroughly prepared and consistent release to date, and even though that all lyrics are interconnected, it is not a full-blown, all-out concept album, since the following two tracks are slightly off-topic: ‘Language of the Dead’ was the last track to be written for this album, and was originally supposed to be instrumental in the vein of Metallica’s ‘Orion’. However, after having conjured up the main- and chorus-riffs, some captivating and memorable vocal lines began popping up in my mind, and I thought it would be a shame to rob the song from Mik Mentor’s stentorian outbursts. In order to enhance the commercial appeal and avoid a lengthy affair, I skipped three monstrous instrumental passages, which might come in handy in another context.

The lyrics are inspired by the poem ‘Red Plague’ by Polish poet and freedom fighter Józef Szczepański, who in 1944 alongside the Polish Resistance Army fought against the Germans in Nazi-occupied Warsaw. The poem describes the failed hopes of the insurgents that the Red Army approaching from the east would save them, and this song pays homage to these brave and sorely tested Poles, who were caught between two fascist regimes.

The lyrics illustrate what I picture went through Jósef Szczepański’s mind inside the rubble of the destroyed Polish capital. Surrounded by two sworn enemies, caught in a deadly trap, the so-called liberators soon became the invaders, who were to rule Poland with an iron fist for many years to come.

The album-closer is the original title-track off of the ‘Grand Gesture of Defiance – Part II’-album, which I chose to bury long before its ‘baptism of fire’, as I considered the songwriting too stale, lacklustre, uninteresting and hook-deprived. However, I felt the title-track contained too many high-quality and interestingly diverse segments merely to cast into oblivion, which compelled me to use it for this new record. Lastly, with its versatile approach, dynamic song-structure and epic outro, I consider this song the perfect “closing argument”, also given that it encompasses all the well-known Altar of Oblivion trademarks.

I guess my main sources of inspiration must be all kinds of stimulating music, personal struggles, tragedies of war, human stupidity, religion, melancholy, nostalgia, morbid poetry etc. I was born in 1979 and I, therefore, grew up at close quarters with the amazing and mind-boggling 80s. My father also listened to 80s pop music and various 70s doom metal/rock bands back then (in fact he still does) and introduced me to some great acts, so somehow it seems natural for me to play that kind of music, as I so to speak drank the 80s and the 70s with my mother’s milk.

What really appeals to me in much 80s inspired pop music is the catchy and yet deep and melancholic melodies which peak in captivating and memorable refrains. Of course, there were heaps of one hit wonders and flashes in the pan which is often the case in popular music but even though several bands only had a few quality contributions they still deserve their place in the history of music. Moreover, ambient, country, soundtracks and blues sometimes find its way to my stereo. In short terms: I like intelligent and in-depth-going music holding a good and high-quality melody. I would also like to point out that I find tons of inspiration in literature and documentaries about the Second World War, personal experiences, atmospheres in movies plus stupidity and inanity of mankind.

When I attended senior high school, I started showing interest for The Third Reich, and since then, I have been doing a lot of reading, been watching a lot of documentaries, been visiting museums about this particular and unique era in history, and it seemed obvious and even inevitable not to incorporate a WW2 based theme into my lyrics at some point in my career. When I composed the music and lyrics for the demo and debut full-length, I just sat down trying to visualize and imagine how it must have been for a German private to take part in the fighting during WW2, and the ideas quickly started popping up in my mind. I also like to integrate my personal struggles and experiences into the lyrics which means the lyrics are ambiguous and can be interpreted on different levels.