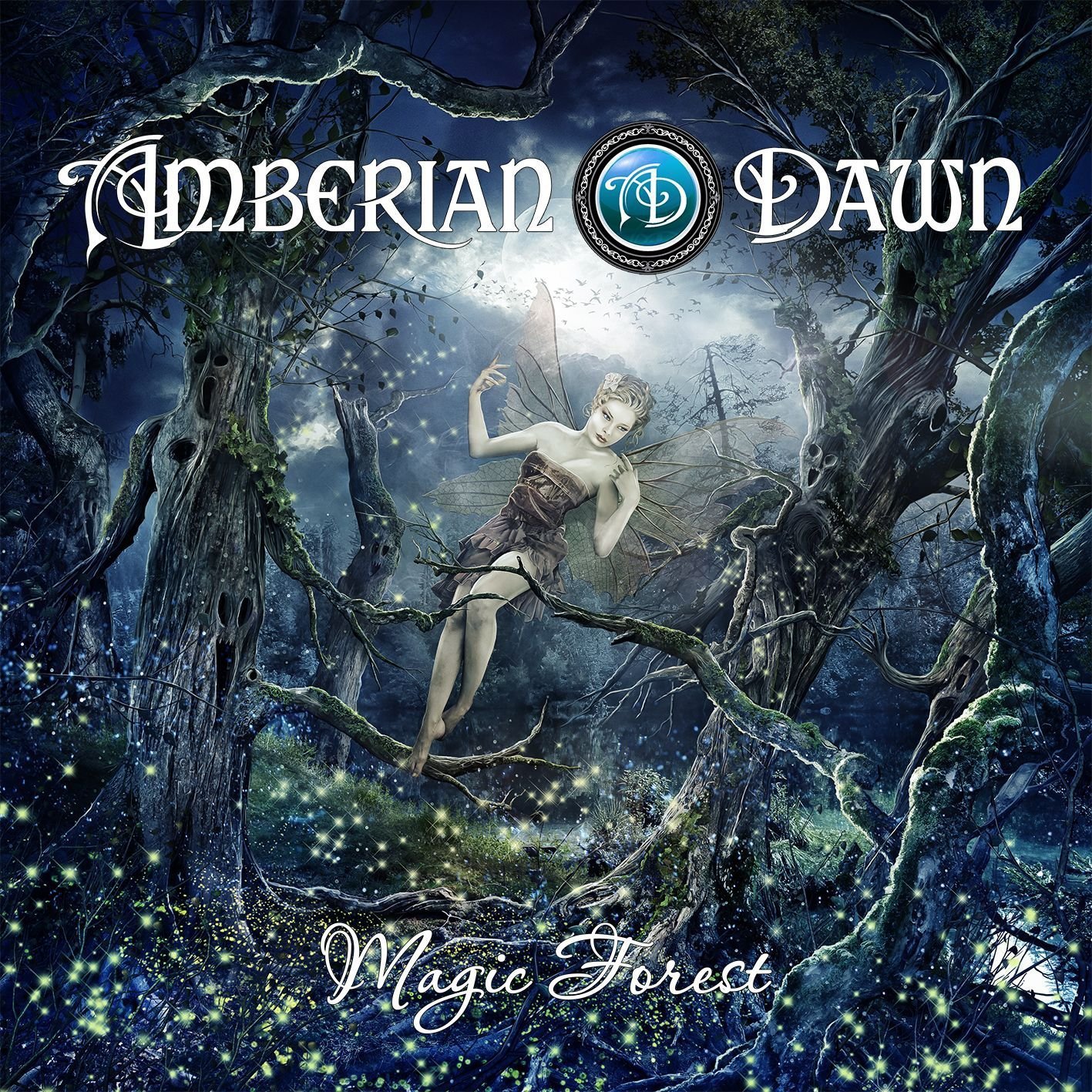 New label and singer, Amberian Dawn appear as focused as ever

After 6 years together, Amberian Dawn announced to the world they were parting ways with 3 of their band members, including original singer Heidi Parviainen. Two familiar faces were then brought in to fill the voids left on drums & guitar by way of former members Joonas Pykälä-Aho and Emil Pohjalainen respectively. From there little time was wasted to put the fans’ minds at ease when under 2 months after the departure of Hiedi was made public, the announcement came that the new voice of Amberian Dawn had indeed been found and would be none other than fellow Finn Capri Virkkunen. Now, after releasing a compilation album of some old tracks with the new voice, Amberian Dawn is celebrating their 8th year with the release of their 6th studio album: Magic Forest.

Nolan Gladu: First off, congratulations on the completion & release of your 5th original album, Magic Forest. Where did the concept for Magic Forest come from?

Tuomas Seppälä: The album is not a concept album. It’s a collection of songs in certain style and lyrics. ”Magic Forest” was one of the first new songs we demoed with Capri and for some reason I wanted the song to be titled as ”Magic Forest”. Usually, I don’t want to give titles to songs because the titles are based on the lyrics (which are always written by AD’s singer). With this particular song, I just felt strongly that the atmosphere and feeling of the song could be best described with the title ”MF”. Capri liked the idea and that’s how we kept this title for this song. Later, when we had demoed all the songs, we all thought that ”MF” is a suitable title for the whole album because it’s quite a typical song on the album and also the lyrics of the whole album are somehow related to that topic.

Nolan Gladu (HMA): Tuomas, I’ve read that previously you would compose the music before sending it off to Heidi to add lyrics. Was the same dynamic kept in place for the composition of Magic Forest?

TS: Yes, the procedure is still the same. I make a demo of every song at my home studio and then I send the song to the lyricist. It’s good that working this way is suitable for Capri too.

Nolan (HMA): I watched the music video you guys released for the title track, very cool. How much artistic input does the band retain when it comes to music videos, album artwork and the like? Do you have a lot of say as to what makes it and what doesn’t or is it mainly delegated to you by the label?

TS: We have always had full control with our music videos and artwork (thanks to our good labels). With MF we also had total freedom to get the video done. We didn’t plan the video ourselves; instead, we used a video director named Markku Kirves who wrote the synopsis for this video (which is based on the lyrics of course). Naturally we gave some comments and guidelines for him, but basically, the video is planned and written by Mr Kirves. I don’t know about other bands doing, or how much labels, in general, are controlling the video productions etc. With us, it’s been easy so far, because we have always had total artistic freedom, with music and videos.

Nolan (HMA): Speaking of labels, what was the biggest attraction to signing with Napalm after being with Spinefarm?

TS: I wanted AD on the label which is able to get our music released worldwide and with good promotion work. Napalm Records is one of the best metal labels around so it was really good for AD to get signed to NR.

Nolan (HMA): Typically there will always be at least some level of backlash among fans when a new singer is brought into the fold. Have you guys encountered much, or any, of that since Capri joined?

TS: Changing the singer is always a dramatic situation. We were lucky that we found an awesome singer like Capri to replace our previous singer. When we started looking for a new vocalist, I wasn’t looking for a ”new Heidi”. Instead, I was just looking for one just outstanding and excellent female voice. It was just an accident really that Capri is able to sign in a classical way too. I think that most of our old fans have accepted Capri as our new singer but of course, there’s also some who are not accepting her at all. But you can never please everyone though, so in general, I’m sure that we made the right decision with Capri.

Nolan (HMA): I love the idea behind Re-Evolution. That’s a nice way to introduce Capri to the fans by allowing her to put her spin on tracks they’re already familiar with. Whose idea was that and how did you decide on which tracks to include?

TS: The idea was probably mine, I don’t remember exactly that if there were other people to back my idea. It all started when we demoed some of old AD’s songs with Capri. I wanted to hear out how her vocal sound would fit on old AD songs. The result was just perfect and more songs we tried, the more convinced I was that this material should be released properly. That’s how we re-recorded most of the instrumentals parts and added Capri’s vocal parts. I and Capri chose the songs. There were so many good songs to choose from and she can sing those all so it was quite difficult to choose the best. We still needed to change the key of some songs.

Nolan (HMA): Capri, did you encounter any problems trying to add your own touch to the Re-Evolution tracks or did you find that it flowed naturally?

CV: I think my own touch is my voice. I didn’t feel any pressure because I knew the band trusted me to do my own thing. It was like I was supposed to sing those songs. I like Heidi’s stories so it was natural for me to sing all those songs.

Nolan (HMA): Now that you have Capri singing for you in a more straight forward rock manner as opposed to Heidi’s operatic approach, did that alter how you came at the writing when composing the new album?

TS: Maybe I’ve changed my songwriting a little bit. Before Capri joined the band I composed the vocal lines in the same way as I write instrumental parts. Nowadays I don’t. I want to try to hear those vocal melodies inside my head and sung by Capri. Furthermore, now I can use more of my AOR (Album-orientated rock) kind of ideas in AD’s songs than before. AOR-kinds of songs won’t work so well with the classical way of singing. Good examples of those songs are Cold Kiss and Cherish My Memory.

Nolan (HMA): With so many sub-genres that consistently pop up it can sometimes be hard to classify a band as anyone certain thing. I have heard you guys called symphonic metal, power metal, neo-classical metal, but for a band that credits influences so diverse, they range from Ritchie Blackmore and Yngwie Malmsteen to ABBA you almost need your own category entirely. How would you best describe AD up to this point and do you see or plan on that changing at all moving forward now with Capri?

TS: Melodic Metal is something that I feel describes AD’s music the best. Maybe our older stuff was more symphonic also. Now there’s more AOR and rock-spices. Symphonic parts are still there, but not in such a dominating role as before. I’ve been composing music for about 30 years now. My way of writing songs varies a lot in time and usually, I have some kind of ”seasons” going on. For a couple of weeks I might be keen on power metal stuff and after that, there might some ”softer season” during which I write just musical stuff for example. So, most of the changes in style aren’t related to AD’s singer at all. Sometimes I’ve considered forming new bands for my different kind of songs, but so far

I haven’t had the energy for that. If I’ll ever start a new band (which is still possible) I would like to have a male singer for a change. My first band experiment was actually with a male singer. Peter James Goodman was the guy who really encouraged me to start a band of my own back then. Maybe it was 2004 or 2005. That was the beginning of ”Atheme One” which later transformed into Amberian Dawn.

Nolan (HMA): Capri, having come from a solo career, what are some of the biggest benefits you have found so far from working in a group setting and what, if any, hurdles have you encountered?

CV: I really like working in a group. Right away the band felt like a family and they really made me feel very welcome. I’m looking forward to touring with them. Working with Tuomas I have found wonderful. Those songs he composes makes me see five minutes movies and that makes it an easy way to start writing lyrics. So this is a perfect way for me.

Nolan (HMA): I noticed on your website that nobody is credited with playing bass. Who took over those duties on the album and who will be looking after that on tour?

TS: We didn’t have a bass player when we started to work with Re-Evolution album. Some of those bass tracks were original (played by Jukka) and for some songs, I played the missing base lanes. With Magic Forest, we had a session bass player named Jukka Hoffren who plays in several Finnish prog metal bands (for example in Adamantra). It’s possible that Mr Hoffren might join AD later as a full member, let’s see. So far he’s still ”just” a session player and plays with us on our forthcoming shows.

Nolan (HMA): Thanks a lot of guys. I like to close with this one: at this moment in time your 3 favourite bands in no particular order are: