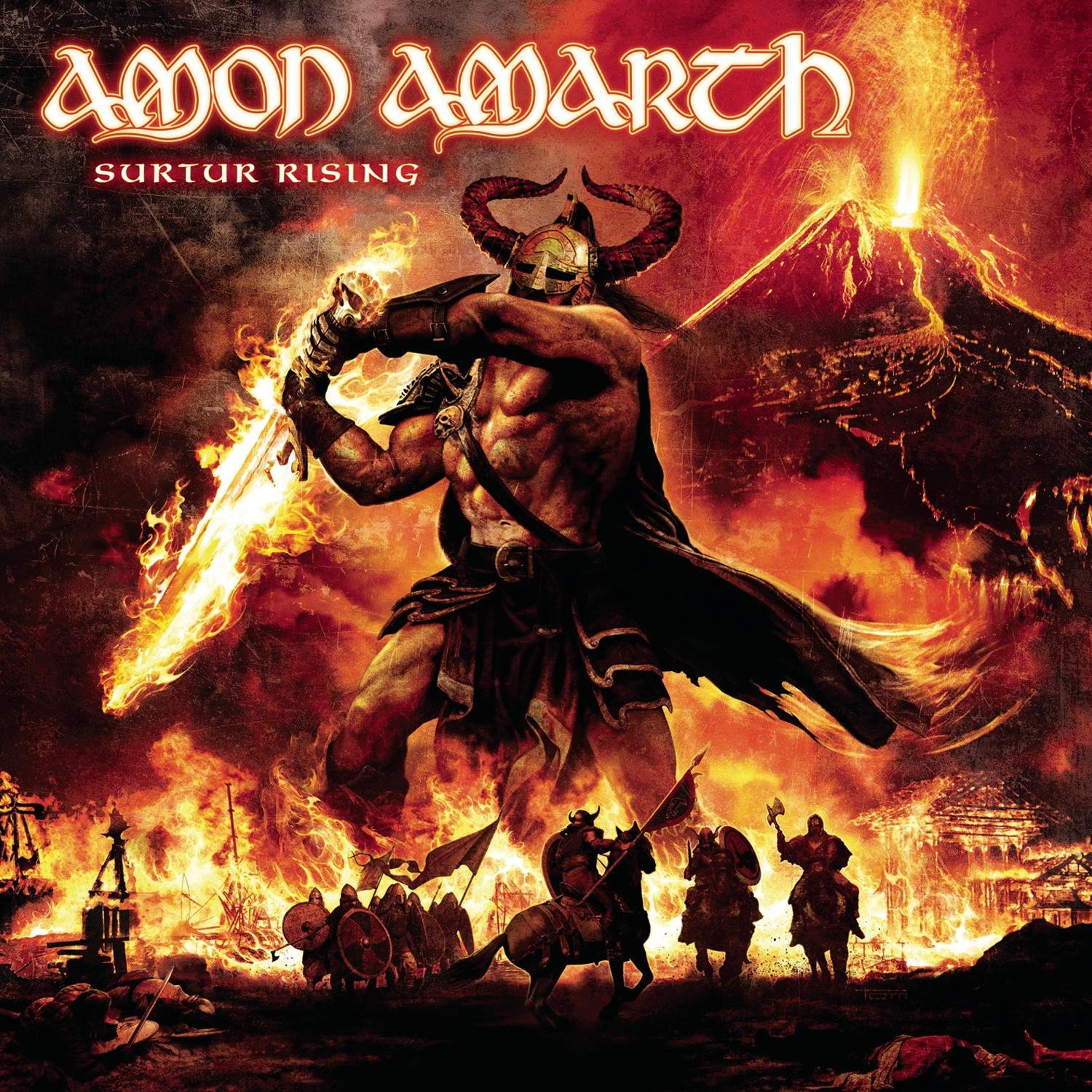 Amon Amarth is currently one of the most famous bands in the world, adored by thousands for their distinctive brand of melodic death metal, characterised by “epic-sounding brutality”, compelling melodies, primal vocals and Viking-inspired song lyrics. The band’s name is the Elvish moniker for Mount Doom in JRR Tolkien’s epic fantasy novel “The Lord of the Rings”, and weighty issues such as doom and death are all part and parcel of the musical experience when you listen to this similarly epic band. Since they formed in 1988 they have released 9 studio albums; the latest release, in 2013, was Deceiver of the Gods which is laden with evocative Norse and Viking imagery. Here, Amon Amarth talks to HMA about touring, beer and the vagaries of the ever-changing music industry.

HMA: How are you doing?

HMA: Are you going around all of the UK, or has the touring stopped?

Amon Amarth: This is the fifth and last stop.  We did Glasgow, Birmingham, Manchester, Bristol.

HMA: Have you noticed anything…?  Is it colder than usual in England, or am I imagining it?

Amon Amarth: I don’t know, I don’t spend that much… It’s usually about the same this time of year, I guess.

HMA: Doing my research for this, I noticed that you were commenting on the various temperatures of places you’ve been.

Amon Amarth: That was during the Mayhem show in the States. It was like 40 degrees Celsius during the day, so it was a little bit warmer than here.

HMA:  That must be a bit confusing for your body sometimes, to be subjected to so many different geographical places.

Amon Amarth: You kind of take it with just the way things are. It’s like touring life is in general; you just wake up the next day and you’re in a different place, but everything else is pretty much the same. New things are interesting.

HMA:  That’s good. Do you ever get to do stuff, like touristy stuff, on tour?

Amon Amarth: Yeah, we try to. As long as we have time we try to walk around, do some sightseeing.  We don’t really go to museums and stuff like that, but maybe go shopping. You can go to Camden here in London.

Amon Amarth: I didn’t have time today, but I think some people went.

HMA: Have you ever bought anything cool while touring? You must have a collection of really exotic stuff.

Amon Amarth: Yes, obviously, the first time we went to Australia we bought a boomerang and some stuff.  Every time you go somewhere exotic, like a strange or more unusual place, we can maybe buy something local. Otherwise it’s just usually what you need being on tour, or stuff you want.

HMA: What about beer? You must get to sample quite a few different types.

Amon Amarth: Yes.  For me, Ted, and Johan, we try as much local stuff as possible, and if we find a different beer shop we go and pick up some exotic beer.

HMA: Cool. Have you got a favorite beer, or favorite place to buy beer, even?

Amon Amarth: No, I don’t really. If it’s a good selection beer store, they usually have everything. Compared to Sweden, if you’re into special types of beers, then it’s actually cheaper to buy beer in Sweden than anywhere else because we don’t pay extra for a fancy beer.

HMA: My favorite thing about Sweden is definitely the food.

HMA: Yeah, I guess. Cool. I noticed as well that you have very good taste in television shows, in terms of Game of Thrones and Breaking Bad.

Amon Amarth: Yeah, Breaking Bad is definitely one of the best TV series I’ve seen in a long time, and Game of Thrones, as well.

HMA: Do you have any recommendations of anything in a similar vein?

Amon Amarth: House of Cards is brilliant. I don’t know if it’s exclusive to… no, you can buy it on DVD now; it was exclusive to Netflix before.  Yeah, I really liked it. I’m a big fan of Harvey Keitel. Yeah. What else? I haven’t really watched anything else. I’m a little bit nerdy, so I’m re-watching the Battle Star Galactica, as well.

HMA: I love Battle Star Galactica.  Crazy. My favorite character is probably … I can’t remember his name, it’s been years since I’ve watched it, but the guy with the awesome hair, the sideways Mohawk, who says his shoes are too tight.

HMA: I think it’s on Battlestar.  I think it’s the second series or the first series.  It’s an amazing Mohawk.

Amon Amarth: I don’t remember that.

HMA: Moving on to your album covers. Is there anything you can tell me about it? Tell me your favorite cover, or piece.

Amon Amarth: The music from Amon Amarth is that we try to always visualize a whole concept. It’s not just about the music or just about the artwork. Everything works together. When we write a song, we try to think about what it sounds like. Does it sound like you’re charging towards a hill, or does it sound like you’re dying, or something like that? We try to see it as a movie. I think to describe Amon Amarth is like describing a movie.

HMA: I like that idea. I can’t help but notice that you obviously have artwork tattooed on your body. Does that relate to your music as well?

Amon Amarth: In some sense, I did some Viking-y stuff, but otherwise, I was just into tattoos. Obviously, I’m not the first. When I turned 18, the first thing I did was went to a tattoo artist, and just got anything. I never really cared too much about it.  I just wanted ink on my body. It doesn’t really matter what it was.

HMA: Would you change that now?

Amon Amarth: I was very impatient. I wanted tattoos quickly, and I didn’t really have much money for it to make it.  Whenever I had a little bit of money, I did something.  I guess if I had waited, I would have maybe saved up a bigger amount of money and do some nicer art, but you can’t change that. I don’t regret anything, but that’s what I would have done differently.

HMA: In terms of the future, what can we expect from the band?  Do you have any plans?

Amon Amarth: We just basically started the cycle for this album, so we’re just going to keep on touring, probably all of next year, and then start thinking about a new album.   So far, it’s just trying to promote the album and play for as many of our fans as possible.

HMA: Not many people are paying for music, are your stage shows more elaborate to compensate for that?

Amon Amarth: There’s not really much you can do, I don’t think.  The fact that people are not buying music anymore reflects on the live shows as well, because more and more bands are trying to compensate the loss in record sales by touring more. So every time you tour, there’s more bands out, so in some sense, fewer people come to the shows because they can’t afford to go to all the shows they want to. You just have to basically try to balance it as good as possible. I think the music industry is dependent on record sales, so I hope that it’s not going to get too crazy too soon.

HMA: Thanks for the interview and good luck with the show.