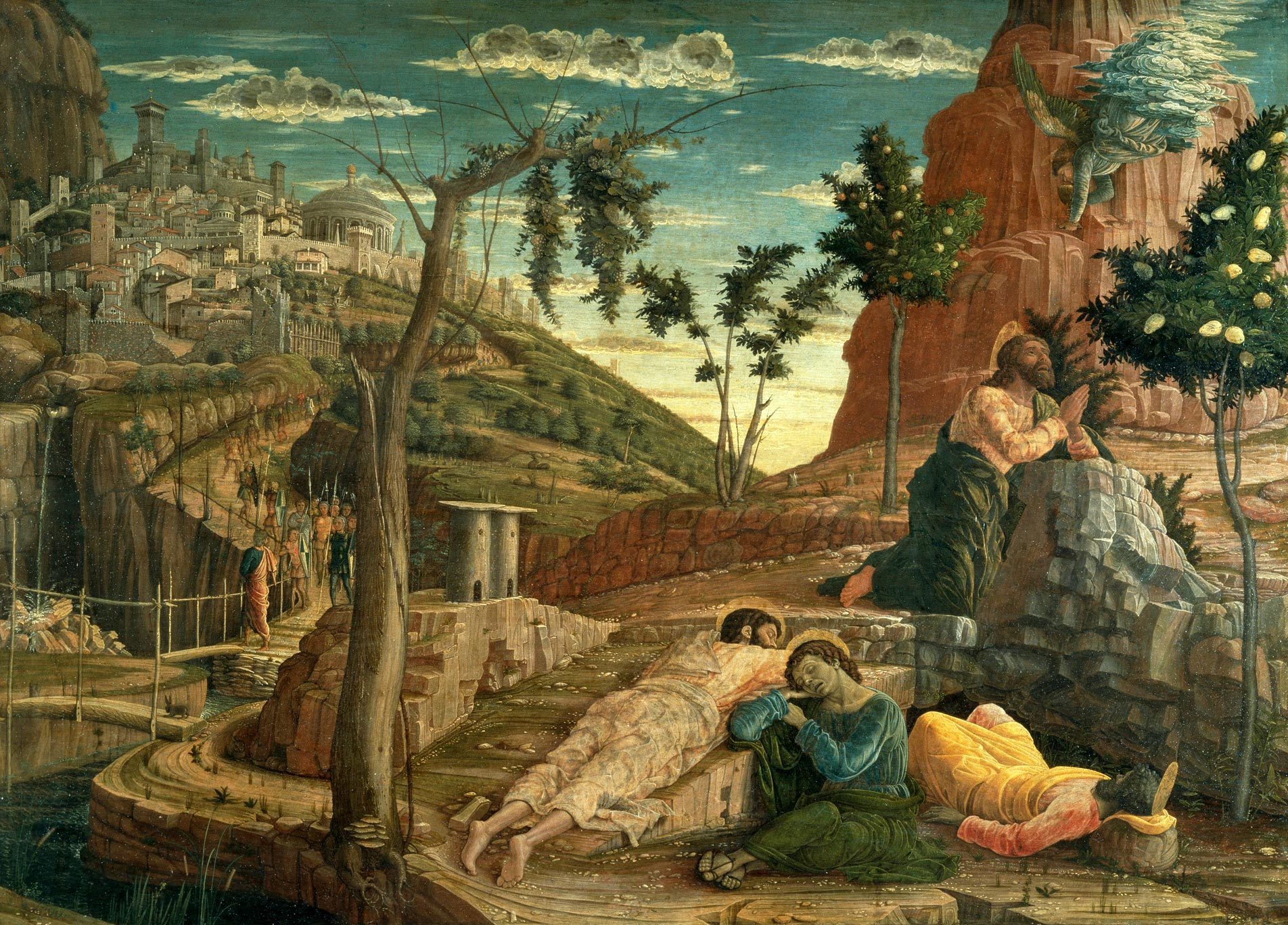 VASARI tells us that Andrea Mantegna ”was so kind and lovable that he will always be remembered”, but not everyone found him memorable for those reasons. Certainly not Simone Ardizzone da Reggio, a printmaker briefly under Mantegna’s direction who made the mistake of taking on some additional work without his consent. First, Mantegna had him threatened; then the capo di tutti capi of the Mantuan art world sent a dozen armed men to assassinate him; when they failed, he attempted to have him arrested on trumped-up charges of sodomy. Simone fled to Verona and subsequently kept a safe distance between himself and the first painter to the court of the Gonzagas.

Mantegna left his own, memorable image of himself in the form of the bronze bust that adorns his mau-soleum in Mantua. A painted plaster cast of it is the first thing that you see in the Royal Academy’s sporadi-cally marvellous exhibition of Mantegna’s paintings, prints and drawings. Exhibit One, it hints at just about everything in his character that you might choose to find revealed in his art. Wreathed with laurel, Mantegna confronts you in the guise of a Republican senator or Stoic philosopher, although there is also something disturbing in the stern twist of his features.

Mantegna was a hard man and he painted a hard, hard world. No painter of sacred subjects, before or since, has created a vision of man and nature so thoroughly devoid of optimism. It makes its first appearance in the earliest attributed picture in this show, the panel of St Jerome in the Wilderness of around 1448-9. The landscape that surrounds the saint in his cave is punctuated by sharp rocky extrusions like knives thrust up through the skin of the earth. Violence lurks in this petrified world: Mantegna, whose obsession with stone and stoniness seems to have reflected something of his own, flinty temperament, developed the fantastic mineralogy of his paintings as a metaphor for threat, risk and danger. There are few gentle declivities, few rolling hills, in his art. But there are always these jagged mountains, these broken crags and sudden, sickening precipices.

They are there, too, in his Adoration of the Shepherds, of 1450-1, from the Metropolitan Museum of Art in New York. The holy family is, temporarily, at rest. Joseph sleeps; Mary kneels in prayer; the infant Christ lies in the fallen folds of her cloak. A pair of rude peasants, as craggy as Mantegna’s landscape, arrive to pay their devotions. But even this scene of apparent repose is freighted with suggestions of menace. The shepherds tending their flocks on the mountainside in the distance stand and chat on the edge of a vertiginous drop. The infant Christ lies perilously close to one of the many ledges formed by the splintery, unstable nature of the ledge on which he lies, while a barren, cruciform tree hints at His trial to come.

It was characteristic of Mantegna, an artist so constantly alert to the tragic dimension of Christian story, that he should have been a great painter of sorrow. This has not always been recognised. Bernard Berenson found the expression on Christ’s face in his late Man of Sorrows to be ”inane”, and remarked on the ”per-functory grimaces” of the two angels who attend Him. Unfair comments, but they suggest something about the nature of Mantegna’s achievement. He did not idealise grief, here, but made it appallingly present: the painting’s ugliness, its awkwardness, is also responsible for its power.

Mantegna painted several versions of The Holy Family that look as though carved from stone, like the bas-reliefs of Roman funerary art. Yet the effect is not of an artist straining to evoke an archaeological memory but of one adapting the forms of past art to his own, pressing requirements. What Mantegna gets from this close-cropped, frieze-like arrangement of figures is something the artist of antiquity is quite uninterested in – a sense of intimacy, of complete, cloistered aloneness. This is why there is no more moving painting of the most common theme in Western art than the Berlin Mantegna Madonna and Child.

The mother and her baby are isolated against a dark ground, leaving nothing else to reflect on but their closeness. The child is asleep, his mother’s gaze vacant, maternally abstracted, as if her whole soul is ab-sorbed in the act of nurture. Her great hands hold him close to her, one wrapped around his midriff, the other curved around his cheek. There is no better or more poignant painting of the warm weight, the vital inertness, of a sleeping baby’s head. It may be significant that Mantegna saw Mary’s affection for the infant Christ as something that can only be given issue to in the dark, protected from the harsh glare of his daylit world. To love, in Mantegna’s devotional art, is to be a refugee.

The fascination which classical art held for Mantegna, manifest not only in his compositional sense but, too, in the lapidary quality of his line, is well documented. His paintings frequently include fragments of classical statuary and he is said to have been peculiarly attracted to subjects which required the recreation of scenes from antiquity. The roots of Mantegna’s classicism lie in the romantic antiquarianism of the humanist circles in Padua and Mantua in which he moved, and this has given rise to a common view of the artist, reflected in many of the comments passed in the catalogue to this show: ”For Mantegna,” it is said, ”the visible remains of antiquity conjured up a grander, more ordered world than the one in which he lived.”

But is this actually true? And was Mantegna really, in his preoccupation with the ancient world, the har-binger of that gradual secularisation of painting that may be detected in the art of the High Renaissance – and that can be said to culminate in the Neoclassical art of David and Ingres? These are not unimportant questions, since on the answers to them depends the established notion of Mantegna’s contribution to the development of European art.

The issue is complicated by the fact that the most important examples of Mantegna’s classicising art are in ruins. The frescoes that he completed for the Eremitani in Padua early in his career survive only in the form of black and white photographs, because an Allied bomb scored a direct hit on the church during the Second World War. And The Triumphs of Caesar, Mantegna’s most famous cycle of paintings, are now ghosts of what they must once have been, the victims of so many botched attempts at restoration that hardly any of their original surface survives.

Still, there is enough evidence to suggest that Mantegna’s attitudes to the ancient world were considera-bly less naive than those imputed to him by so many of his commentators. The photographs of the Eremitani fresco cycle include a famous scene of St James Led to Execution which indicates that Mantegna was fully alive to the brutality, the summary cruelty of the Roman military state. A wall of soldiery bars the way of an anonymous man who would witness St James’s progress to execution: a great image of the impersonal, murderous efficiency of Rome, but hardly an artist’s vision of ”a grander, more ordered world than the one in which he lived”.

The RA show itself includes much that jars with the notion of Mantegna as an artist romantically besotted with the classical past, one itching for the benevolent patronage of the Gonzagas to release him from the tiresome burden of religious commissions. Mantegna’s prints of bacchanalia are stern indictments of paganism, their classical manner – again, these are two-dimensional images conceived as sculptural friezes – actually serving a disapproving Christian message concerning the perils of drunkenness.

The more time you spend with Mantegna’s art, the less he seems a harbinger of the High Renaissance (let alone of Neoclassicism) than a ferocious, late Gothic moralist: indeed, one of the chief lessons of this show lies in its demonstration of how clumsy and falsifying such generic terms as ”Gothic” and ”Renais-sance” really are. Mantegna’s innovative adaptations of classical sources were a new development in art, but the attitudes that lay behind them were rooted in a fierce and entirely traditional Christian piety. This is true, too, of his innovations in perspective, although the best example of this is not present in London: it is the Dead Christ in Milan, where Mantegna’s extraordinary foreshortening exists, not to call attention to the artist’s virtuosity, but to force the eye to crawl, inch by inch, along the body of the Saviour, and to meditate on the tragic physical evidence of man’s betrayal of the Son of God.

Mantegna’s is, essentially, an art of renunciation. It sets its face against facility and even against beauty, because such things are both inimical and irrelevant to its true intentions – which are, always, to convey the significance of the story told. His cast of mind becomes more and more sternly allegorical, and allegory always demands the suppression of that which is incidental or superfluous to interpretation. Nowhere is this more evident than in Mantegna’s most sculptural paintings, the grisailles.

These are unusual pictures, because they so openly declare their alienation from their own medium: they are paintings designed, literally, to look like sculptures. They do not read, however, as an antiquarian’s wist-ful homages to classical statuary. Rather, the hard monochrome forms presented in a work like the grisaille of Judith and Holofernes convey the artist’s determination to transform images into emblems. No refuge from their Christian significance can be taken in their presumed likeness to real people, real scenes: they are frozen symbols, petrified representations of representations. Mantegna probably despised the misty loveliness of Leonardo’s figures and landscapes, and he would certainly have been intensely suspicious of Titian’s sensuality. For his own part, he willingly forgoes the potential seductiveness of paint, its juice and colour. They are distractions.

So where does this leave his most famous, most seductive and most classically inspired paintings, the nine Triumphs of Caesar? Are they, as Kenneth Clark once argued, the conclusive evidence that to Mantegna ”Roman grandeur was one with Roman gravitas, Roman triumph with Roman justice?” It is hard to say, because they are so wrecked, but that is not – at least in the context of this exhibition – the impression they give. What you see is a vast triumphal procession, a victorious Roman horde bearing its trophies with it, Julius Caesar bringing up the rear.

These paintings of Roman grandeur (if that is what they are) seem peculiarly double-edged. In them, Mantegna dwells on the fruits of that pointless savagery, that human will to conquest and domination, that is the eternal rule in his hard, sad world: he pictures a vast array of possessions that do not matter; a grand accumulation of all the things that Christianity teaches us to renounce. The Triumphs of Caesar might once have demonstrated that a capacity for irony was present in Mantegna’s extreme and ascetic sensibility. Their ruination may not be entirely inappropriate. They amount to the grandest, the most ambitious, the most splendid vanitas in the history of art.