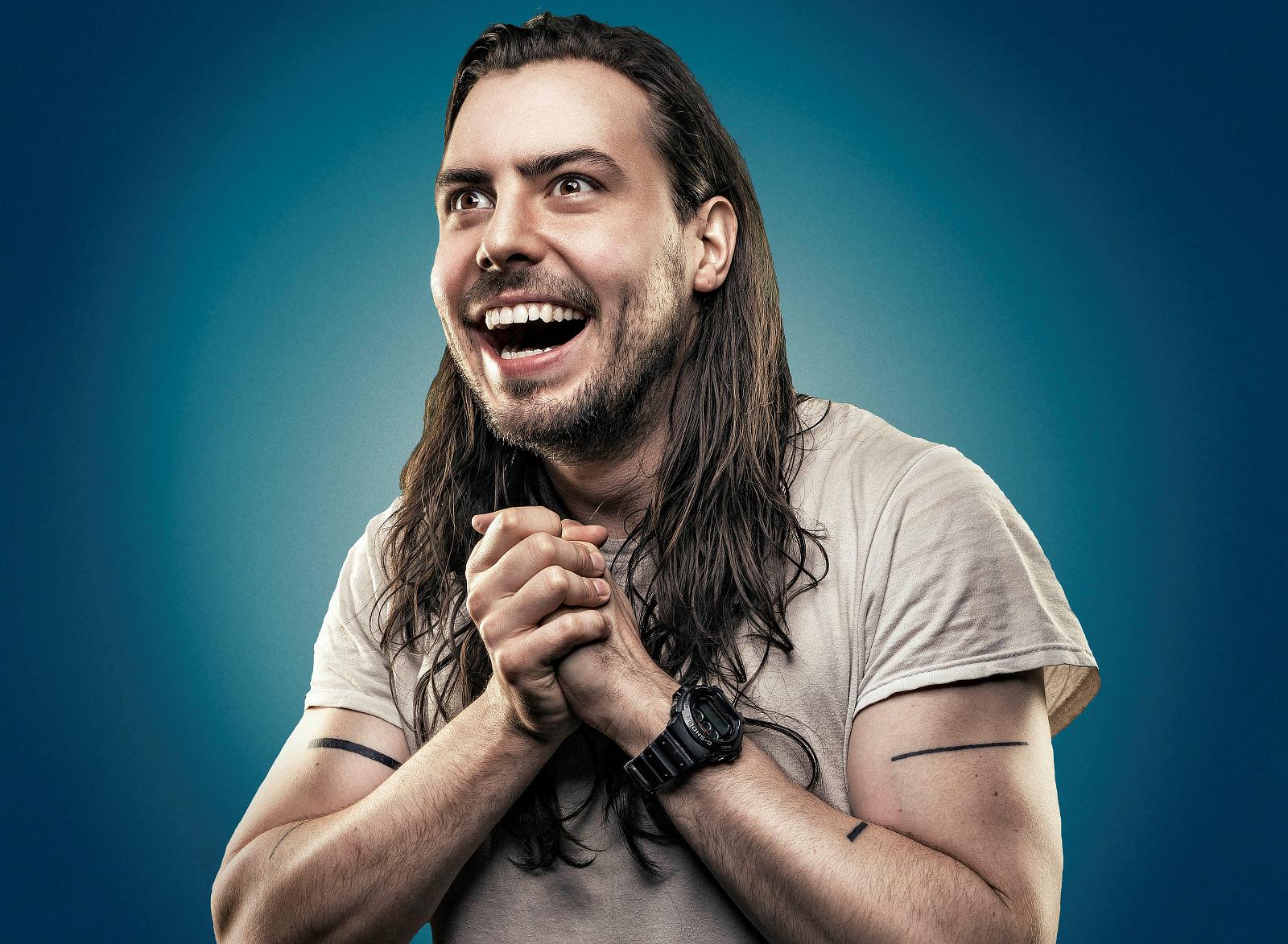 The Art of Partying

Everybody likes a party. There are all kinds of them and they’re happening all the time. Some parties are formed of thousands of people in a field on drugs, some are based around food and intelligent conversation; what you might call a ‘dinner party’. Other parties aren’t quite so fun, for example, a ‘search party’ – even worse than that is this thing sweeping Britain at the moment called a ‘Conservative Party’. I’ve never been to a conservative party, but I’d imagine it’s full of posh twats. None of the above applies to Andrew W K’s version of a party. His breakthrough album ‘I Get Wet’ is rife with anthemic sing-along tunes that seemingly suggest a kind of Frat Party lifestyle, with songs such as ‘It’s Time to Party’, ‘Party Hard’ and ‘Party Till You Puke’ you’d be forgiven for thinking along these lines. His iconic bleeding nose album cover was another sign of the misinterpretation of his ethos, with European officials labelling it as some kind of ad for drug endorsement.

But if you look a little closer you will find that Andrew’s ‘party’ has a more philosophical meaning, and his music carries a deeper message that is ironically borne out of its very simplicity. And this message isn’t just constrained to the medium of music; he’s also a self-help motivational speaker, further spreading his positive vibes on the vehicle that is his own self-styled party ideology. It doesn’t stop there either; he has recently spoken at a My Little Pony convention in Ohio, praising the ‘individuality’ of the MLP enthusiasts who sat before him. He was also even appointed a US cultural ambassador to the Middle East, although this was then rescinded at the last minute. As a multi-instrumentalist, record producer, New York club owner and all of the above, there really is nothing he won’t try. Heavymetalartwork.com gets a closer look at his machine-like approach to creative diversity.

Andrew W.K.: The music is definitely made with the hope that it’s energizing and gives you this kind of internal spirit, or rather, amplifies the spirit that’s already there. That feeling, actually, can happen through talking. Language and communication, you can amp people up that way. You can get that energy spirited up. You can pump yourself up, and others. Basically, I just want to use any means that I have within my reach to get that energy churning.

Manuela Mattera (HMA): You spoke at the My Little Pony convention. How did that happen?

Andrew W.K.: Yes. They asked me. Much like Download Festival, they asked me here, My Little Pony asked me there. I will go where I am asked, and where people want my party energy, I’m only happy to show up. A lot of it is new experiences for me, sometimes it’s unpredictable, but if you go in with open mind, open heart, and a party attitude, it usually works out.

HMA: Are you thinking about doing any political speech, because you were appointed to be the Middle Eastern US Ambassador, right?

Andrew W.K.: Yeah, cultural ambassador. I was asked to go to Bahrain to talk about, really, what we’re talking about. About life, but also about music, and to meet with students over there, and have a cultural exchange. The State Department in the US was setting it up, and they cancelled it because they saw the photo of my bloody nose, and they became very frightened. I don’t blame them, though. No, I’m not very good at the traditional realm of politics and government, but I find some of it interesting, as much as anybody else, and some of it frustrating, as much as anybody else. I think that my strengths aren’t so much in that realm. They’re more in the realm of going like … You’re not supposed to do that when you’re president or something like that.

Andrew W.K.: You know, it could be exactly what we need people to do. Flail around a little bit.

HMA: Like real people. I just read… the collaboration with David Tibet from Current 93.

Andrew W.K.: I always liked Current 93’s music a great deal. There’s a lot of it, stuff I had heard. One song, in particular, I was just completely blown away. It was one of those moments when you’re just sort of out and about, and you don’t necessarily expect to have your mind blown. Next thing you know, you’re hearing one of the greatest songs in your life, and you realize at that moment that everything’s changed. I had that happen with Current 93, and then years later, sort of through unpredictable people, managed to basically tell David Tibet, the leader of the group, that I would do anything to be able to play with him. He asked me to play bass. Played bass in the band for a couple years. Got to tour with them, and it was extremely incredible… real privilege.

HMA: Do you like Death in June, all their stuff as well?

Andrew W.K.: I like Death in June too, yeah. That whole scene. Throbbing Gristle a great deal, of course.

HMA: That’s amazing because of you never… It’s very difficult to find someone in metal that likes that kind of stuff.

Andrew W.K.: Hey, David Tibet’s a very open-minded gentleman, and very expansive in his tastes and what he is open to in life. It’s really up to him, you know. I could’ve asked, and he could’ve said, “No. Stay away,” but he didn’t. He said, “Come hither,” and I did.

HMA: Do you have any projects, because you do lots of stuff. You do give talks, you do music.

Andrew W.K.: I don’t know. I don’t know anything. I didn’t know I was going to be coming to do this. I don’t know anything anymore about anything. All I do is a party as hard as I can, and then see what happens, basically. I have turned myself over to the service of forces that I really have very little control over, but that’s good. I used to think I was in control of things, but I never really was. Now that I realize that, it’s a lot more fun.

HMA: What about your book ‘The Party…’. How is going?

Andrew W.K.: Yes, I’m still working on it. It’s very challenging, the first book I’ve ever written. Initially, it was about sort of general thoughts on life, and now, through people’s encouragement and strong urging, it’s more about stories from my own life. Which is challenging for me, because oftentimes it’s difficult to know when you’re talking about your own life if it’s very interesting or not. Hopefully, people like it. I know that when I’ve read books about other people’s lives, I like that, so maybe someone will like this. Hopefully, they’ll still be able to learn about things in general, but we’ll see.

HMA: You don’t know when it’s going to finish?

Andrew W.K.: Hopefully this year. Maybe next year. You never know. Again, I’m not in… Who knows?

HMA: You’re not in control anymore.

Andrew W.K.: I’m not in control of anything. Completely out of control.

HMA: Do you have any new material for new albums?

Andrew W.K.: A lot of stuff is stockpiled. A lot of song ideas, lot of parts, things in waiting. Again, I have to be told to record it, so once that is set aside, I’m ready. That’s for sure. I’m very excited about it. I used to be very frustrated, almost depressed, about not being able to record, but it wasn’t time, you know? I wouldn’t be here with you right now if I was recording the album, so I’ve got to follow the orders.

HMA: What’s your touring plans? Are you just doing Download, are you actually touring?

Andrew W.K.: Constantly playing shows all over, different shows, but this is the one festival here, now, in this part of the world, and then hopefully we’ll come back in not too long of a time, but again, I don’t know… I don’t know anything about the future. I just don’t know, except that I will be partying. That’s the only thing that I’m confident about.

HMA: You actually have a club in New York, right?

Andrew W.K.: Yes, this is true. I’m one of the founding co-owners of Santos Party House, which is in Manhattan, downtown. I must say, I’m quite proud of how diverse this club has been. We’ve had everyone play there, from Cannibal Corpse to Afrojack, to Calvin Harris, to Q-Tip, to Busta Rhymes, to Mick Jagger coming by to dance, which was completely mind-blowing. He just danced on the floor, and people didn’t realize it was him, because they just couldn’t believe that it was. That was always a dream of my friend, and mine, to open our own nightclub concert hall in New York City, and we managed to do it, again, through the support of a whole bunch of people.

HMA: Are you still playing… Your drummer, the guy from Obituary …

Andrew W.K.: Obituary, of course, is playing their own self again. There was a time when they were taking a short break, which was very sad, in a way, being a huge Obituary fan. I was 18 years old, I wrote a letter to Donald Tardy, the drummer, and asked if he would drum in my band if he wasn’t too busy with Obituary, and he said, “Okay.” Then, my life changed forever. He basically formed my whole band. Now, Obituary, of course, is back, and bigger than ever. They actually are doing better than they’ve ever done, which is the most thrilling thing for me, being such a huge fan. I listen to their music literally every day, and there’s not a nicer person in the world, or better drummer than Donald Tardy. I am forever indebted to him.

HMA: Do you ever think to go into more death metal kind of music with your music you write?

Andrew W.K.: I mean, why would I even bother trying to approach the level of quality that Obituary, and so many other bands, have done? I can listen to one Obituary song for the rest of my life and know that I couldn’t even begin to approach even a reflection of a shadow of the quality of what they’re doing. That’s what they were meant to do, hopefully, I’m doing what I was meant to do.