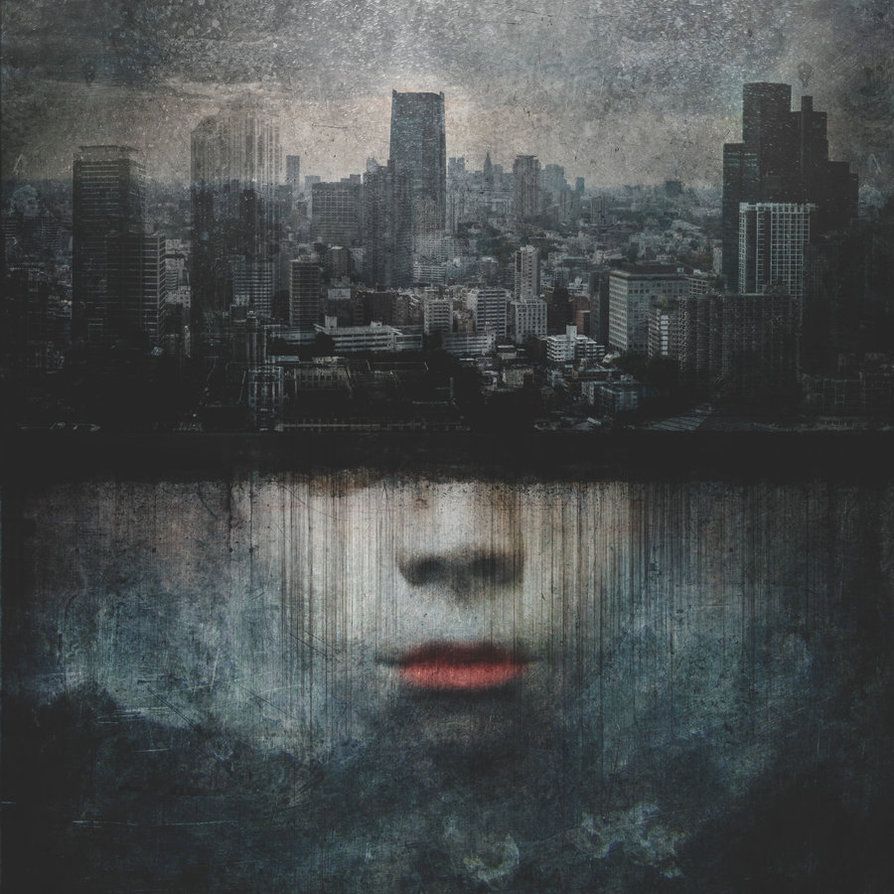 I began to do graphics as a necessity for my band. I was in a thrash metal band and we recorded our first album, so we needed a cover for it. I thought that it would be cool to design it myself. I made it and I had a lot of satisfaction in the making process. So this was the first sparkle. After that, I kept on producing some personal work and I decided to try to propose myself to some bands and it worked.

Talking about technique I’m totally into digital. I’m not a good drawer so I create all my images using Photoshop. I start with a rough idea and than I develop it, searching the right photos to manipulate, the better textures and working a lot on colours. With logos I work in the opposite way: I’m a great fan of calligraphy and I practise a lot, so I just put all ideas on paper using calligraphy pens or just a pencil, until I reach the perfect and unique forms. Then I digitalize it with Illustrator.

In these years I’ve been so “lucky”, because all the bands I worked with gave me total freedom of act. Often they just give me some adjectives, they tell me about the songs and the theme of the album, but nothing specific as “We want a giant skull over a pile of rotten flesh”! This kind of freedom has both positive and negative shades, of course, because there can be misunderstandings about what they mean and what I understand. On the other hand I have the possibility to explore what’s in my mind and try to be as much original as I can.

I think that my artistic vision and philosophy have been well described by Federico Salvador, my band mate All My Faith Lost… and owner of the online art shop reflectedfith.com. He wrote “With his photo manipulations Angelo Roccagli creates landscapes of worlds and souls in ruins. Falling cities and desperate human beings emerge with defined details and vivid colours among strong, grunge textures. His art is a cruel look upon an imaginary catastrophic future.” I never thought about how describing or “label” my visions but he managed perfectly.

As far as I’m concerned music and visual arts are totally tied by the same ability to evoke feelings and emotions. Probably in two different ways, music is often related to memories and experiences, visual art is something that capture your gaze in the very moment you bump into it. I always listen to music while I’m working on some artworks, for bands or for personal purpose. It gives me the right mood, if I’m working on some obscure artwork, listening to bands such My Dying Bride or Paradise Lost sets my mind in the right way of thinking, just for example.

I love symbolism and especially the religious iconography. But it isn’t always related to the artworks, because I try to fit the images on the music and lyrics of the albums the band’s propose. I recently worked for the album “Aldaraja” by Overunit Machine, where the basic theme was esotericism and magic, so I made some research and I choose to use a lot of magical and alchemy related symbolism. It was fun to explore a new world and find the meanings behind all those symbols. Some of my personal works have been used for a special musical event in Bruges, Belgium and I’m looking for further exhibition in Italy, my native country. Of course I hope there will be the possibility to partecipate to other cool events outside my own country.