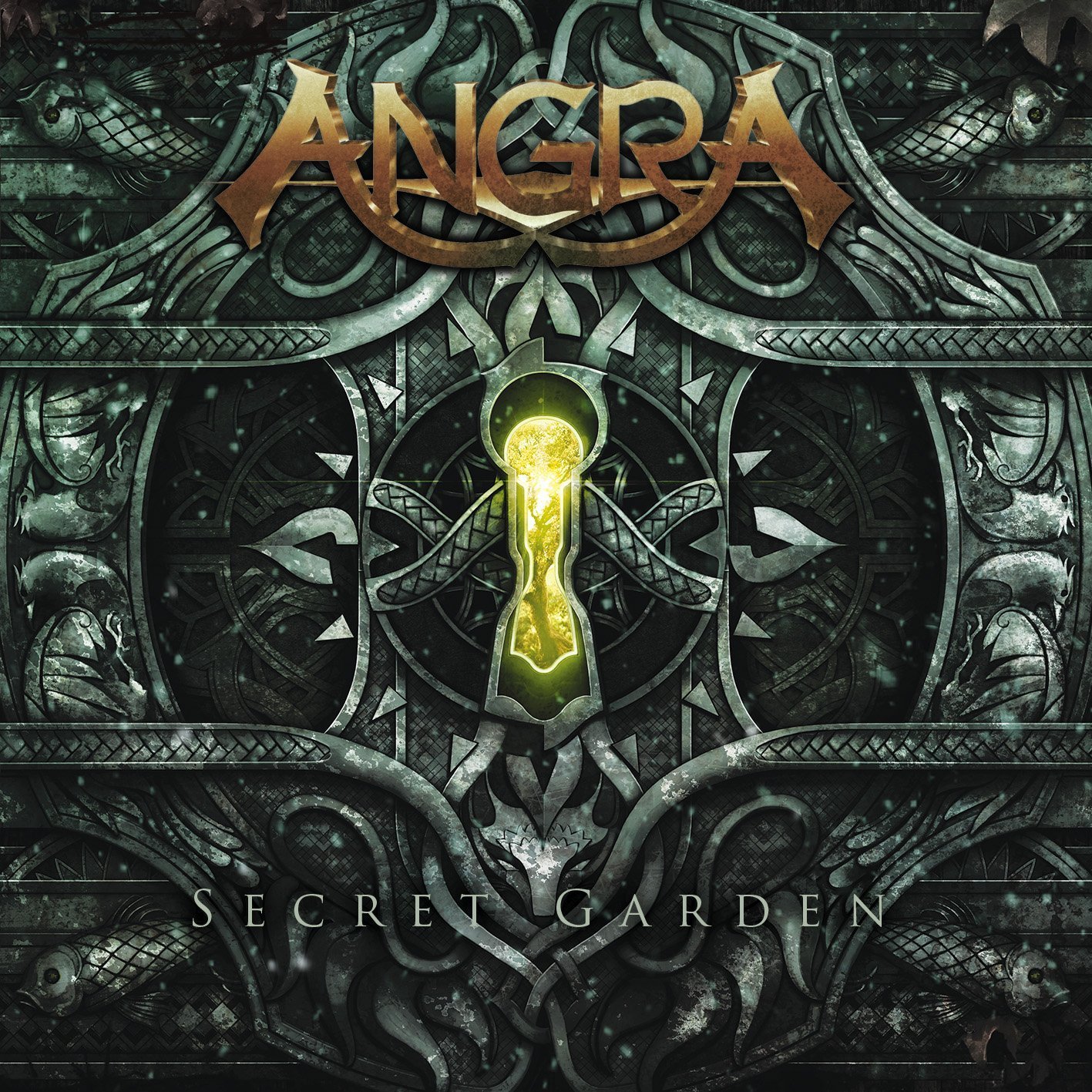 After the release of “Angels Cry: 20th Anniversary Tour”, Brazilian power/progressive metal Angra returns to the UK. Guitarist and founding member Rafael Bittencourt, talks to HMA about the band’s interest in art, literature, the music industry and Rhapsody of Fire’s own powerful singer, Fabio Lione. We couldn’t be happier to see Fabio Lione as Angra’s new frontman and to witness them in action.

HMA: How has the band’s sound progressed from “Aurora Consurgens” to the new album “Acqua”?

Angra: I think we are just changing as people and we do the best we can when recording an album and you can find good and bad stuff over the course of anyone’s career. I see it this way, you know. I feel like during the first albums you have a lot of energy. You are young and you want to conquer everything. You have no past, no history, you don’t know the business or how it works. You don’t know what you have to do to, say….have a great tour for instance. You just don’t know.

HMA: You still have the energy and the charisma to play.

HMA: You basically don’t think about the sales.

Angra: You don’t think about the sales. You don’t have fans yet. It’s very different. You find a lot of great stuff because of that. In the first album, we are still playing in that newbie way. The songs of the first album are still like super good… the fans still think that the first is one of the best, like the Holy Land. The second one… It isn’t like the more music you make the better you become because when you get involved in the music business you can be frustrated. You get frustrated, you have all the perks but it is the creative flow, not experience that is going to give you real success.

HMA: Have you had to experience a label pushing for something more commercial?

Angra: Actually in the metal scene the record labels are not so invasive. They are not so into the idea that you have to play pop stuff. I have this vision that is very removed from the pop world. If you want to be in the top 10 on the radio you have to obey some certain rules I guess.

HMA: So you’ve got more freedom to play what you like. How do you feel with SPV label? Have they ever pushed you to do something that you don’t want to do?

Angra: No, no. They cannot… Sometimes if you ask record companies they make suggestions or they say something like, “I like that or I don’t like that. Why don’t you guys do this differently than you did in the last album,” which is cool because of we like SPV or JVC in Japan, they have been our partners for many, many years? They know us and they know the sales reps, they know the fans, they know the market, they know all the bands. They know how it works. I think it’s good. I can ask a record label guy, just like I can ask a fan, just like I can ask a journalist. What do you think about this album, this song or this thing? I just ask and if I choose to listen to the information they give me, that’s my decision.

HMA: You sold something like 900,000 copies of the first album. That was a lot! In “Aurora Consurgens” it was something almost half … anyway, because it’s pretty new but do you think also that the singer makes an influence in the band?

Angra: No. You cannot compare the albums because they are like a… well, you can compare of course but if you compare an album that was sold 10 years ago to an album now you have to consider how much the market has changed…

Angra: Yeah, you have that. You have the original singer thing.

HMA: Have you got any plans for the new album? Who is looking after the artwork?

Angra: We have a great guy who will be doing the artwork. His name is Gustavo Sazes, he’s a Brazilian guy. He lives in Portugal.

HMA: Where does he take the inspirations? Do you give him any advice to with the artwork?

Angra: Yeah, we always give some direction with every artwork. We spoke to the artist already but it’s good when you have the music to give as well. He’s a guy that likes to listen to the music as well. I work with him on some of my solo stuff and he did the Aqua artwork and he did other artworks for Angra. We give directions, we give colours, the basic is going to be red, black and so on.

HMA: You can relate anyway with the music.

Angra: Yeah, yeah. It’s good to give the Pantone colours, the colours you want to have… can be like dark and black, can be white and a picture a drawing or be more like an illustration.

HMA: Colours can be related to the mood of the songs.

Angra: Yeah because with music you have something intangible. You cannot touch. When you place a tangible thing like a figure, a logo, a colour you are already making a connection. It’s like having a book with a picture or a book with no picture. A book with no picture your imagination can go anywhere. That’s why every book it’s better than a movie because the movie it puts you in that image already and then the book your imagination can go anywhere. That’s why it’s very important to decide the image of the band, the logos and the colours you are going to use to represent the moods of the song. If it doesn’t fit maybe it can damage the music if the artwork doesn’t fit to the mood it can even give a bad impression to the music.

HMA: Let’s say that a lot of bands are famous also for their artwork, like for example Iron Maiden.

HMA: You have to combine everything together.

Angra: We tried to do the violent artwork kind of thing mainly in the beginning. Back then you had aggressive artwork like the Pantera with the punching face… Metal bands had always very violent imagery. You have dragons or some monster or some kind of violence and then we have the first Angra album. You have a peaceful white statue holding red flowers on a red sky. If you had a blue sky then it might be too light, the red brings energy. Back then it was very out of tune with what other bands were doing.

On the second album, we have a map and we are talking about the period of exploration and then the discovery of Brazil. We put a world map from that time, the Renaissance. It has nothing to do with metal imagery with the beige old paper colour. It makes sense to the music. Sees to the music. There’s a small picture of the band. We decided not showing our faces like the first albums.

HMA: Who came up with the concept?

Angra: I don’t remember, maybe Raphael? It was a cool idea and then it was a Brazilian guy who was doing the artwork.

HMA: What’s the storyline on the new album Aqua?

Angra: We based the album on Shakespeare’s “The Tempest”. We’ve chosen the characters of the story and we built the songs. It didn’t come from the band a friend that was working in a comic book suggested it. He was showing us work by Shakespeare, some others like Victor Hugo and Dante Alighieri. When he mentioned “The Tempest” we liked the idea because it was how we felt at the time.

HMA: Struggling to reach something?

Angra: There was a lot of interesting stuff going on in the band. It was easy to write songs and lyrics. It was all based on the characters and story like the girls, the angel, air… Caliban was the monster. We could relate to a lot of the story since we have always used angels in our covers and lyrics.

HMA: How do you feel playing with the new singer Fabio Lione.

Angra: He’s great. We’ve been working for one year and a half. He was a guest. We were invited in a show in the US, “70000 Tons of Metal” and we didn’t have a singer and didn’t want to turn down the offer so we asked our long time friend Fabio. It was a short concert. He came to sing with us and we liked the vibe and like a lot, the YouTube videos and promoters and people were asking “why don’t you come here to do a show with Angra and Fabio” so that’s how it started. So since then, we did about 50 shows… or something like that.

HMA: How was the response of the public?

Angra: There’s a lot of good response. People like Fabio because he’s so talented. He’s so good singer, you will see him tonight and give you own impression.

HMA: I know. I have seen him with another band like Rhapsody of Fire, Vision Divine and Labyrinth and so on…

Angra: Then you see the combination with Angra if you like. He’s a different singer compared to the other one but still amazing.

HMA: Also the singer that you had they were brilliant from Andre Matos to Edu Falaschi. Yeah, actually coming back in your experience of 70,000 tons of metal, how was it?

Angra: As I said, it was great. It was a great feeling to be playing open air in the middle of the ocean. You can be with the fans and stuff because everybody is having breakfast in the same place. Quite an interesting experience.

HMA: What’s expectation of the future new Angra ‘s album? Are you writing anything with Fabio Lione already?

HMA: Good, thank you and I Looking forward to seeing your gig tonight.