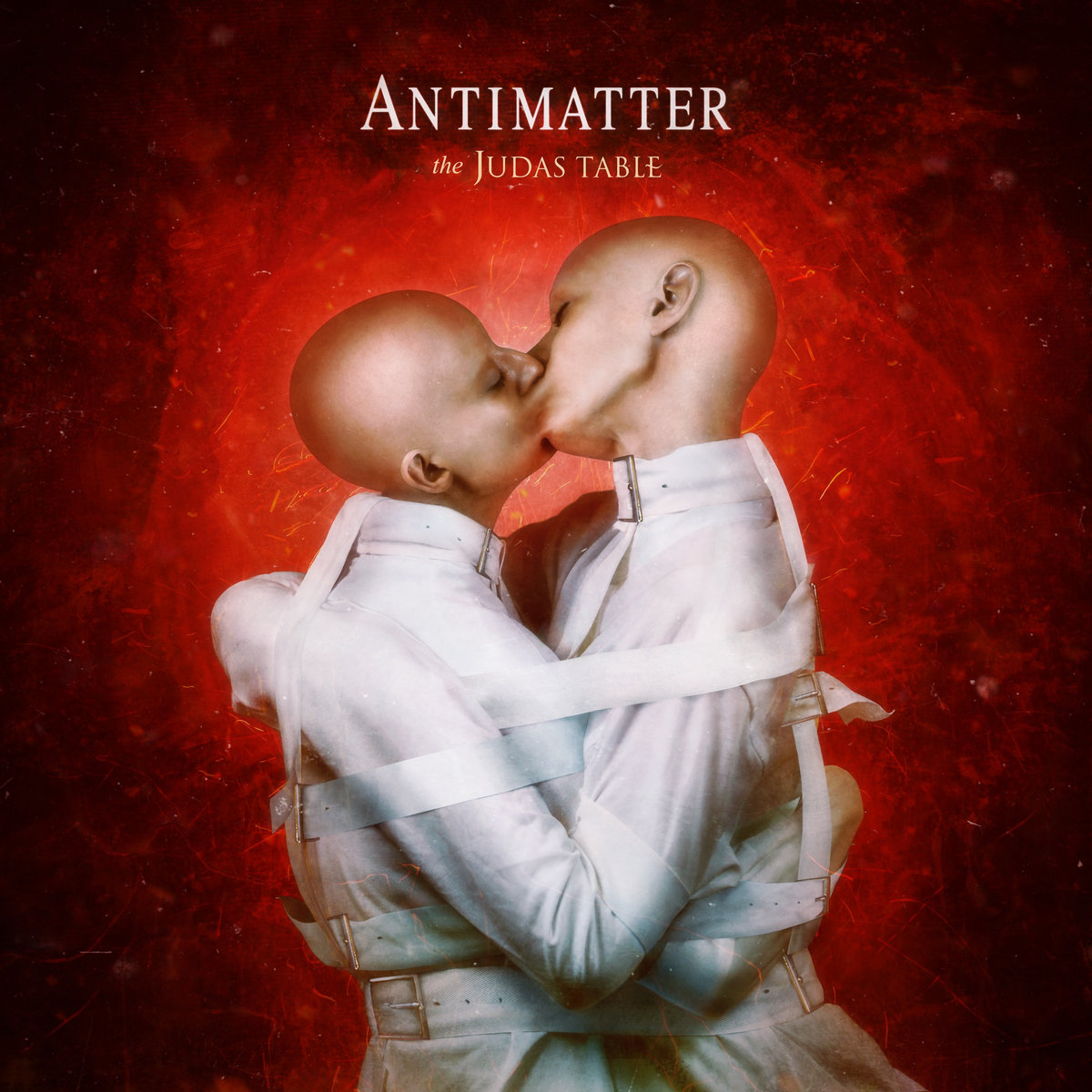 Emotions at a primal level

“Anybody who has ever suffered from betrayal can relate to this album”, Antimatter-main man Mick Moss states self-consciously about his most recent work, ‘The Judas Table’. “I’m singing about my experiences, but I’m a firm believer that they are everybody else’s experiences as well”. Throughout his life, Moss has repeatedly experienced disappointment on a personal level along with the self-doubt that goes with it. The deficiencies of human behaviour and social life have always been the proverbial red thread through his lyrics, but prior to ‘The Judas Table’, a critical limit was exceeded for Moss. On Antimatter’s sixth album, he accounts for different personal conflicts with an unusual, almost scientific poignancy and is harder on people from his immediate surroundings than ever, yet also on himself: “For ‘The Judas Table’ I gather together the various personalities of the people whose callous and disrespectful, backstabbing actions caused me countless wasted years of depression”, he resumes. “For years I thought the problem was with me. I was always open and tried my best, but was nevertheless used and betrayed many times. This led me to believe I was worthless and must have deserved it. Now I realise the problem was with the clinically psychologically soulless people who treated me that way due to their nature, not mine.”

HMA: Welcome Antimatter to Heavy Metal Artwork. We usually begin with the album title. Simply, what is ‘The Judas Table’?

Mick Moss: In short, ‘The Judas Table’ is a summary of the actions, behaviour and driving force behind the narcissists from my life whom I have been unfortunate enough to fall into a relationship, friendship or acquaintance with. People whose callous, unfeeling behaviour caused me countless years of emotional misery, leading me to believe I must have been worthless to have been treated like that. As I matured mentally and got older I began to realise that these people all had a common thread, that they were selfish beings who saw others as below them and there to be used. Once this realisation fell into place I began to heal. This album is a dissection of some of those personality types, hopefully, to make others aware, and the concept of the title itself is about a nightmare scenario where I am gathered at a dinner party with all of these people together.

HMA: The lyric “Celestial, this range of voices. Too many years nailed to your choices” really stands out. Can you tell more on the meaning?

MM: The “celestial voices” refer to the people in your past who have hurt you badly. I think it is pretty much accepted that we grant, whether we like to admit it or not, a power-status to these people, because they have had the power to reach into our souls and affect us so much. ‘Too many years nailed to your choices’ is saying that my (broken) mental state has been a direct result of their narcissistic behaviour for long enough now, and it’s time to make a change.

HMA: Can you tell us about your video ‘Stillborn Empires’?

MM: Yeah that was done by the very talented team at Tomfoolery Pictures here in Liverpool. The song deals with a passage I had read in a sociology book which outlined the behaviour of some women in the workplace, who used sex to gain an advantage and as a career gradient by fucking a series of bosses and/or people who were in a position to move their career forward. The book made it quite clear that this kind of behaviour was textbook prostitution, even though the women themselves would never see this, and neither would the men in power who they were giving their bodies to. But this drew direct comparisons to two females from my past who were very ambitious and who did in fact sleep, quite prolifically, with males who they thought could help them financially or with their careers, and I thought it was fantastic that I could back up my well-formulated opinion of them two particular sluts with a nod towards actual documented, professional sociological research.

So I had my outline of the video which I handed to Owen from Tomfoolery, and in my script was the businessman in his office with the pig’s head (I had been reading ‘Animal Farm’ at the time) who would disrobe to reveal a female body, one dressed to entice. Owen took that idea and added a whole bunch of other stuff to the shooting script which, on the surface, seemed totally unrealistic to achieve, so I was like “Owen, are you sure you can do this?” and he seemed 100% sure. I was so fucking busy on the final mix of the album and the ensuing tour at that point to even have the time to challenge him, so I decided to kill the control-freak in me and put my complete faith in the guys there, and my God, did they deliver!!! What a great final piece.

HMA: What thoughts did you have while writing the song of the album? Was there anything in particular that you wanted to achieve?

MM: I wanted to create a study, a paper if you like, on this particular set of people from my past that would hopefully reverberate with the listener, and maybe help them to relate and understand why they have been treated with such disrespect in their own past by a similar set of people, as I think it is a no-brainer that these kinds of people operate throughout society. That was one aim. Another aim was for me to lay out completely a retrospective map for myself of the effects people have had on me, to clarify to myself that this broken mental state I occupy at the moment is not my natural state, it is merely the symptom of the sickness brought on by the treatment I have received. In all I managed to achieve quite a lot with these lyrics, although to fully complete what I set out to would have maybe taken a double, or even triple album.

HMA: How difficult/easy is it to transfer emotions into music?

MM: It’s all I’ve been doing since 1995 when I first bought all of my gear and set about working on my very first set of demos, so it’s neither difficult or easy to do, just a process that I am accustomed to going through for over 20 years now. It’s kind of a cycle as well, so I’ll be productive, get sharp about it and then all of a sudden go through this lull of no ideas, no inspiration. I’m just coming out of one of those lulls at the time of this interview and beginning to work out musical ideas for what will go on to be the 7th Antimatter album. I already have the concept for it, I have done for years now, and I’m just starting to search inside myself for the music.

HMA: Your music is heartfelt and incredibly emotional, Is there a common lyrical concept that unites your musical journey you taken this far?

MM: Hmm hard to say. If I was to gather all of the lyrics I have written so far and ask myself what is the common gene between them all, I would say it is my search to rationalise and process the frustrating aspects of my life that have truly threatened to abolish my sanity. To become bigger, stronger and more intelligent than the problems which have been laid before me.

HMA: I love ‘The Judas Table’ and I am happy to have done this interview. A record filled with almost tangible emotions. Still not clear… the music accompanies the lyrics or has you written the lyrics to sustain the music?

MM: Actually this time the songs sustain the concept. I originally had the concept for ‘The Judas Table’ sometime around the turn of the century, maybe a bit later. Back then, in my head, I wanted to do an album called ‘I.D. Parade’ which was exactly the same concept of the dinner party I spoke about earlier, but except it wasn’t a dinner party, it was, well, an I.D. Parade, haha. So I put the idea to bed and as the years passed and my archive of songs grew I started to see that I was still writing songs about the hurt that people had caused me. So whilst I worked on the concept album that would become ‘Fear Of A Unique Identity;… which was a separate story about mindlessly following the most popular mindset (even if it was spiritually and ethically corrupt) just to avoid being singled out by the masses…. I kept in mind that the next album would be my I.D. Parade concept, except by this time the umbrella thread that gathered all the songs together was now about a dinner party with all of my enemies. But yeah, back to your original question, I gathered the finished songs together out of my archive to sustain the concept of the album as a whole and then set about writing new pieces to fill in the blanks of what I wanted to say.

HMA: Lastly… can you tell us about the cover art?

MM: I wanted to reflect the album’s concept, but on a deeper, more primal level, and I eventually commissioned Mario Nevado to create the image from my head. Basically what the album cover represents is… if an otherwise sane person gets into a relationship with an insane person, then the treatment they receive will drive them insane, and afterwards the memory of it will keep them insane. It also represents the symbiotic relationship of a narcissist sucking the life out of an empath, with the empath eventually developing trust issues thus beginning to display narcissistic traits themselves, like a virus. It had all these layered, deeper meanings and I was so disappointed with the online community who chose to mistakenly think it was about homosexuality (because the two kissing figures are genderless) and then get deeply offended. One of the aftermaths of that misconception is that there have been parts of the world I have performed where I’ve been asked not to have the art projected in the venue, in case it upset some right-wing factions. Like homosexuality is something to be worried about…? Something to be condemned…? Try worrying about whether a person is a thief, or a bully, a pathological liar, an egomaniac or a sociopath, these personality types who seem to get to walk through society unchecked without having any stigma attached instead of stigmatising an adult’s sexual preference. And it wasn’t just the homophobes who were twitching some people just couldn’t stomach the nature of a kiss being portrayed as anything other than romantic, whilst others were upset because the image wasn’t ‘nice’, probably because they’ve been conditioned by this inoffensive modern prog movement that saturates my Facebook feed lately. The artwork just triggered people’s insecurities left, right and centre like a mile of bubble-wrap being driven over by a steamroller, and was certainly the most divisive, controversial album art of my career so far. Bravo!!!

MM: Thank you for having me here 😉