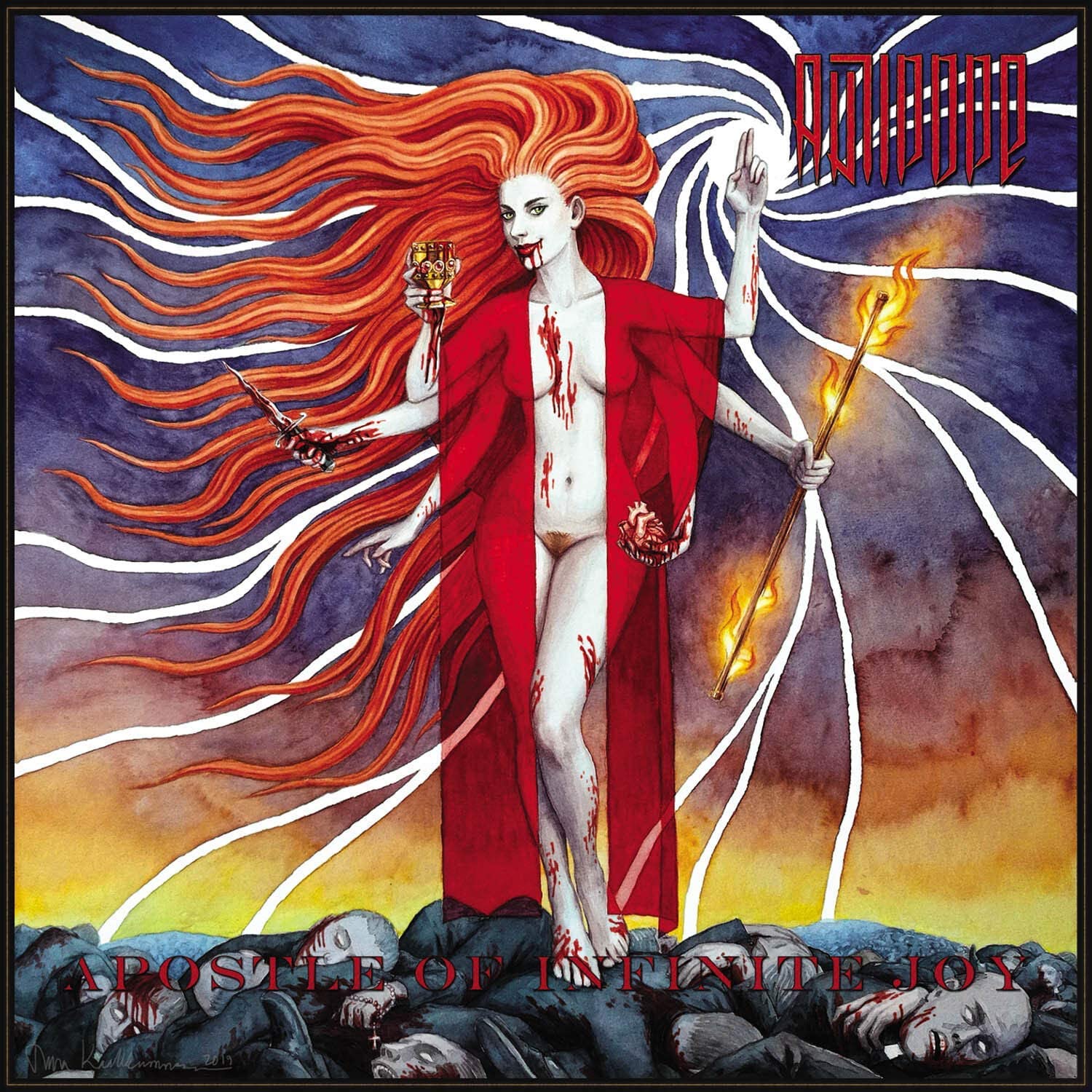 Antipope is a progressive extreme metal band, formed in Finland in 2004. So far, Antipope has released five full-length albums, the latest of which, ‘Apostle of Infinite Joy’ was released worldwide by a US record label Fertile Crescent Productions in February 2020. Antipope started as a progressive black metal act but has since incorporated into their music elements of various metal subgenres, including gothic metal, industrial metal, melodic death metal, and heavy metal. As the main composer, Mikko Myllykangas once embellished upon the Antipope sound and style, “It is metal, for sure, but that’s pretty much all you need to know. Would more words make you feel safer? We don’t want you to feel safe.” This perspective resonates through the diverse nature of Antipope.

HMA: I wanted to start with the name Antipope. What does it mean?

Antti: If I remember correctly, Mikko once put it quite elegantly by conceptualising the name with antimatter. It’s an absence rather than opposition. The name to me at least means the absence of an authority who is able to control your life by injecting you with beliefs or ideologies. One should find out their own beliefs and ideologies while growing as a person. Remember to question these from time to time, to see if they still hold relevance or if they just were stepping stones that should be discarded once no longer needed.

Mikko: Yes, that’s pretty much it. And, to a disappointment of all fundamental Protestants out there, Antipope makes no distinction between denominations or any ideologies that rest on blind faith and bowing down before an authority.

HMA: Your latest album ‘Apostle of Infinite Joy’, can you expand on the title?

Joni: It’s all there in the lyrics of the album so you should listen to it right now. Our music is more lighthearted than typical nordic metal, and our lyrics aren’t only about death, grief, gloom or brutality. So ‘Apostle of Infinite Joy’ is a very fitting title in that sense.

Mikko: As Joni said, it’s best to figure out and experience these things by yourself. But I can tell you a bit more about it anyway. While I was writing the lyrics, I was reading all kinds of esoteric and occult works that discussed spiritual liberation, which was to be the overall theme of the album. I came across the phrase ‘Apostle of Infinite Joy’ in Aleister Crowley’s works. What this ‘Apostle’ stands for in Crowley’s philosophy of Thelema – if you can call it a philosophy – resonated very strongly with the ideas I had for this album. We’ve had a lot of questions coming concerning the title, and that itself speaks for its power. It goes against what is expected from the title of an extreme metal album. I guess if your album is not called something like ‘Sorrowful Death of Decrepit Raven on Doomsday’, you somehow end up being too extreme for some, you know.

HMA: Tell us about your music style, influence?

Mikko: Over the last couple of records, our music has gravitated towards what I would call ‘traditional heavy metal-inspired progressive extreme metal’. Some songs might qualify as gothic metal or even industrial metal if you listen to our older albums. But nowadays, we’ve been more inspired by our heavy metal and black metal roots, which I think gives our style this kind of a unique vibe that combines modern elements with things that take you back to the 1970s and the 80s. For this particular album, the goal was to write a rather straight-forward album with four songs per side, 8 in total, just like those classic heavy metal albums used to be. Still, there’s enough variation between the songs to make it an interesting journey that uses many different colours, both light and dark.

When it comes to musical influences, for years or maybe for decades, I’ve been inspired by bands such as Iron Maiden, Cradle of Filth, Tool and Rotting Christ, which all fit quite easily to one metal sub-genre or other. But I also hugely admire, and I am inspired by artists who really know or knew how to push the envelope, like David Bowie and Frank Zappa, both of who approached music very differently but shared this ‘fuck all the rules’ attitude and managed to create something that stands the test of time.

Tuska E.: I get inspiration from drummers like Scott Columbus, Rhino, Frost, Vinnie Paul and Paul Postabh, to name a few. I like drummers with a unique and recognisable sound and groove.

HMA: Metal has an abundance of sub-genres and styles. Why did you go for Black Metal?

Antti: I don’t see us as a black metal band per se, but I think we dabble in certain places where black metal comes from. Musically, of course, there are few traditional black metal elements present here and there. On a conceptual level, we have been writing about freeing yourself spiritually and emotionally from the flesh’s burdens and transcending to a higher level of existence. But these are mostly where the similarities lie. I find these themes mostly uplifting rather than excessively dark and gloomy as presented more traditionally.

Mikko: I wouldn’t call us a Black Metal band either, even though we do utilise some of the esthetics of Black Metal – like corpse masks while performing now and then, blast beat drumming, use of screaming or death growl vocals and so on. But we do a lot more too, and the result might be a bit confusing if you would expect us to sound like your run-of-the-mill contemporary Black Metal band.

Joni: We do have some historical references in our lyrics, be it historical events or historical figures – as there is also on ‘Apostle of Infinite Joy’. But we don’t have any single theme from which we write about. Our songs are stories, and those stories can be of fantasy, horror, happenings, tales – really anything interesting or inspiring to us.

Antti: The artwork has always been important to the whole experience of the album at hand. This time I feel we went more towards the LP records of old and created a theme or atmosphere for the album with colours and characters. We had the idea of bringing our vision of the Red Goddess to all to see since she is essentially something the whole album touches upon. Not necessarily revolves around, but is perhaps one of the catalysts that put things in motion. And of course, there is also a song dedicated just for her.

Mikko: In the past, we’ve chosen a bit more, let’s say, ‘abstract’ approach to album covers. The plan there had been to give the listener as much room as possible to figure things out. But with ‘Apostle’, by the time I was writing the lyrics and recording the vocals, the general concept and the overall narrative arc of the album had become unusually clear. Almost like someone was dictating the whole thing right behind my left – or maybe it was right – shoulder. With that in mind, I wanted the album cover to be more explicit, you know. So when I contacted Tiina, who also painted the cover for our previous album ‘Denial/Survival’, I could present her with a relatively cohesive general idea or a collection of elements used in the cover. But at that point, there was nothing specific yet. I was certain that she would create something spectacular like she did with the previous album. I liked that cover too. Like the cover of ‘Apostle of Infinite Joy’, she painted it with watercolours, which cover a very hand-made feeling and originality that fits with Antipope’s music.

Antti: Working with Tiina, we gave her a briefing concerning the songs on the album and then she listened to the whole record and showed us what she wanted to do with that. Of course, we had something in our minds as well, but that information was kept from the artist in the beginning entirely since we wanted to see what she came up with after listening to the album. Coincidentally, our visions were somewhat similar.

Mikko: From that point on, we exchanged several emails, commenting on the sketches she made and threw ideas back and forth. But like Antti said, the first things she presented us already capture things that we had discussed just by ourselves without her knowledge. However, when we saw the final version, it blew us all away, she had taken what we discussed together to far beyond the next level and even above that. And yes, it tells a story. So if you do it like they used to do, listen to the album with the cover in your hands (or on your screen), you should be able to see pieces of the story pictured here and there on the cover.