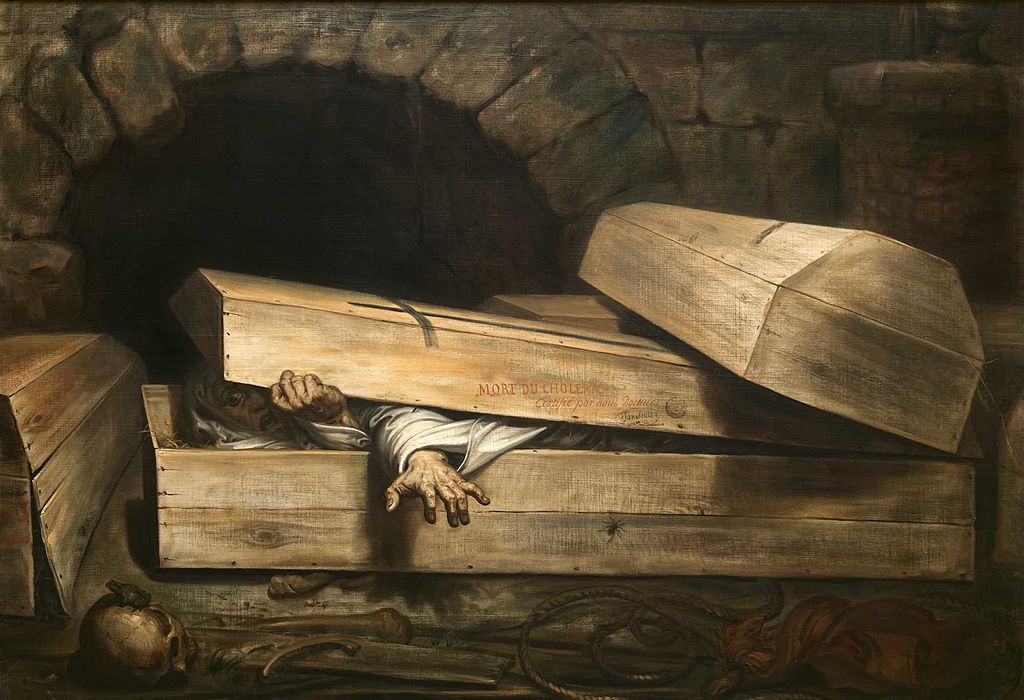 Born in Dinant from a relatively poor family, he entered the Antwerp art academy in 1820. Thanks to his protector Pierre-Joseph de Paul de Maibe, a member of the Second Chamber of the States-General, king William I of the Netherlands awarded an annual stipend to Wiertz from 1821 onwards. Between November 1829 and May 1832, he stayed in Paris, where he studied the old masters at the Louvre. In 1828, Wiertz took part in the Grand Concours, also known as Concours de Rome, but came out only second. He landed the prestigious Prix de Rome only at his second attempt in 1832, which enabled him to go to Rome, where he resided from May 1834 until February 1837. Upon his return, he established himself in Liège with his mother.

During his stay in Rome, Wiertz worked on his first great work, Les Grecs et les Troyens se disputant le corps de Patrocle (“Greeks and Trojans fighting for the body of Patrocles”, finished in 1836), on a subject borrowed from canto XVII of Homer’s Iliad. It was exhibited in Antwerp in 1837, where it met with some success. Wiertz submitted the work for the Paris Salon of 1838, but it arrived too late and was refused.

At the Paris Salon of 1839, Wiertz showed not only his Patrocles, but also three other works: Madame Laetitia Bonaparte sur son lit de mort (“Madame Laetitia Bonaparte on her deathbed”), La Fable des trois souhaits—Insatiabilité humaine (“The fable of the three wishes—Human insatiability”) and Le Christ au tombeau (“Christ entombed”). Badly hung and lit, his entry elicited indifference on the part of the public, and provoked sarcasm among the critics. This second humiliation led to a profound rancour against art critics and against Paris, as expressed in his virulent pamphlet Bruxelles capitale, Paris province. Oil on canvas, 1847 Dissatisfied with the shiny effect of oil painting, he developed a new technique combining the smoothness of oil painting with the speed of execution and the dullness of painting in fresco. This technique of mat painting entailed the use of a mixture of colours, turpentine and petrol on holland. La Lutte homérique (“The Homeric struggle”, 1853) was the first big-scale painting executed in this technique. However, the components used in this technique are responsible for the slow decay of the works produced with it.

Many of his works from the 1850s have a social of philosophical message, often translated in delirious imagery, like Faim, Folie et Crime (“Hunger, Madness and Crime”, 1853), La Liseuse de Romans (“The Reader of Novels”, 1853), Le Suicide (“The Suicide”, 1854), L’Inhumation précipitée (“The premature burial”, 1854), Le Dernier Canon (“The last gun”, 1855).
Wiertz was also a fine portrait painter, who made self-portraits at various ages. As a sculptor, he produced his most important project towards the end of his life: a series of plasters representing Les Quatre Âges de l’Humanité (“The Four Ages of Humanity”, 1860–1862), reproduced in marble for the Wiertz museum by Auguste Franck.

After difficult negotiations with the Belgian government, Wiertz was able to realize his dream to turn his last studio into a museum for his works. The Belgian State bought a piece of land and funded the construction of a huge hall to accommodate the painter’s monumental works. In exchange, Wiertz donated all his works to the Belgian State, with the express proviso that they should remain in his studio both during and after his lifetime. Wiertz died in his studio. His remains were embalmed in accordance with Ancient Egyptian burial rites and buried in a vault in the municipal cemetery of Ixelles. Influenced mainly by Rubens and the late Michelangelo, Wiertz’ monumental painting often moves between classical academism and lurid romanticism, between the grandiose and the ridiculous. Although his work was often derided as art pompier, his pictorial language nevertheless preannounced symbolism and a certain kind of surrealism, two currents that would be very strong in Belgian painting.

A copy of one of Antoine Wiertz’s works, the statue of The Triumph of Light was once prominently located high on San Francisco’s Mount Olympus between the Haight-Ashbury and Corona Heights. It had been presented to the city of San Francisco by Adolph Sutro in 1887. Over the years due to lack of care and maintenance the statue fell into disrepair. By the late 1930s, even the history and origins of the statue were no longer common knowledge in San Francisco, and by the mid 1950s, the statue disappeared. All that remains today is the pedestal and base of the monument.