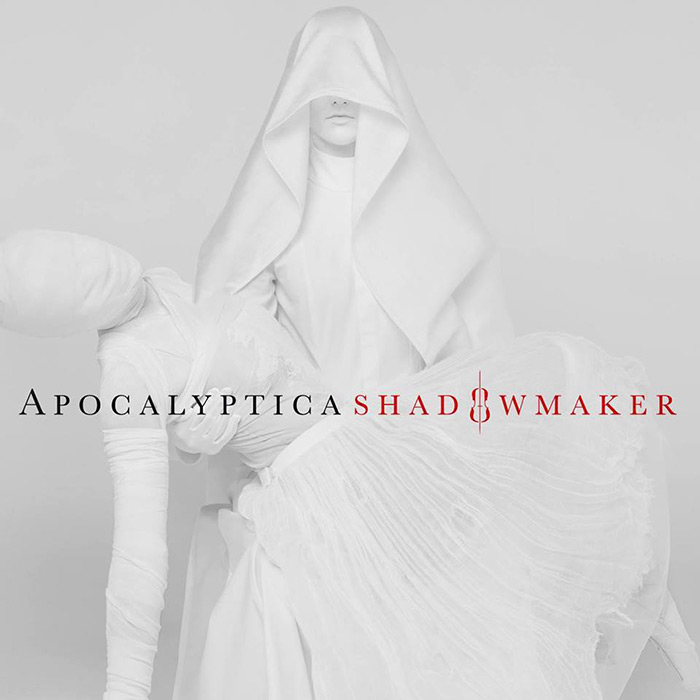 On 20th April, Finnish 4 piece APOCALYPTICA will release their brilliant new studio album ‘Shadowmaker’ through Eleven Seven Music. This time, rather than collect songs with a variety of guest vocals, the band have recorded 7 tracks with one vocalist, Franky Perez, from Scars On Broadway and Slash’s live band, Slash and Friends.The band will be announcing European live plans very soon. Watch this space.

Since their inception in 1993, the cello wielding quartet have redefined the boundaries between rock, metal and classical music in a truly unprecedented way: they’ve not so much rewritten the rulebook as penned a brand new tome all of their own. Formed initially by four true virtuosos at Helsinki’s Sibelius Academy, over the course of seven highly-acclaimed studio albums (of which they have sold in excess of five million copies globally) they have forged a reputation as an act capable of bringing fans from both heavy and more traditional musical spheres together in euphoric celebration. From bow-eviscerating speed to sprawling, spine-shivering waves of sound, APOCALYPTICA’s sonic palette is as rich as it is diverse: Metallica covers, Wagneri an tributes alongside international Symphony Orchestra’s and collaborations with members of Slipknot, Soulfly and Bush all falling comfortably within the band’s remit.

Now, with the release of hotly anticipated eighth record ‘Shadowmaker’, cellists Eicca Toppinen, Paavo Lötjönen, Perttu Kivilaakso and drummer Mikko Sirén are set to detonate their thrillingly immersive noise with a more intense zeal than ever before.

“Before this album we had been working for something like sixteen years without a break,” explains Eicca. “We felt like this time around we needed to take some time away to rejuvenate the creativity within the band. There’s always a risk when you put out albums so consistently that people just expect to hear new music and you end up simply obliging that desire. So, I think that a bit of distance has been fantastic for us, the mood and passion in the band has never been higher. We wanted to clarify the vision for ourselves – music needs to come from a place of desire and joy. Working on this material has been a pleasure and I think that is reflected in the quality of the finished product.”

It is with this rejuvenated spirit that APOCALYPTICA set about penning an album of deftly weaved intricacies infused with an energy as taut as their horsehair bows. Full-to-bursting with killer choruses, deliciously dark overtones and some good old fashioned pedal-to-the-floor speed metal pace, Shadowmaker is a body of work which slices through every facet of human emotion whilst maintaining a consistent musical sensibility that is unmistakably of this band and no other.

“Our biggest passion with this record has been to find the core of our band,” offers Eicca. “In the past we’ve struggled to get everything to sound how we feel it inside. We have had top, top people working on this album with us to help us achieve that this time though. Nick Raskulinecz (Foo Fighters, Mastodon) has produced it, for example, and he is amazing; he really speaks the same musical language as us. Our thinking was ‘We can’t do the record unless we have the very best people working on it’. The theory goes that to develop as a band, you need to be in an environment with people who will challenge you – that has certainly been the case here!”

The other notable challenge the band faced this time out was the introduction of a single singer across the duration of an entire album, something which they have never undertaken before. Former Scars On Broadway guitarist Franky Perez is the man who has taken up residence behind the microphone, not just on the Shadowmaker studio sessions, but also for foreseeable touring commitments.

“Having guest vocalists come in and do things in the past has been a lot of fun,” notes Eicca. “But sometimes it means you can lose a bit of focus when you’re in the studio. Franky has been fantastic, he’s a great voice and he fits to us and our sound brilliantly, we couldn’t be more pleased. Plus, it will be great for people to come and see these songs on tour being sung by him. We’re all just incredibly excited for people to hear this album, I feel like it is our strongest yet, the written material is just so powerful.”

With their vocal focal point now secure, the band have been able to more firmly steer their lyrical narrative to a piercing arrowhead. Developing both personal storytelling angles and more broadly philosophical tangents has been something the Finns have proudly undertaken.

“There’s a lot of possible meanings to the phrase ‘Shadowmaker’,” explains Eicca. “At one level it can be about a person whose energy is so negative they choke out everything positive that you are trying to put into the world. At a wider perspective though, it concerns the notion that we have these faceless, nameless people who control the world we live in and make a lot of bad decisions on our behalf. It can be understood on many levels and I enjoy bringing the multiplicity of that sentiment to the musical message we are putting across.”

For long term fans then, ‘Shadowmaker’ represents APOCALYPTICA’s most ambitious, purposeful project yet; but more than that, it is an album which will surely see them continue to win hearts and minds far and wide across the broadest spectrum of fans.