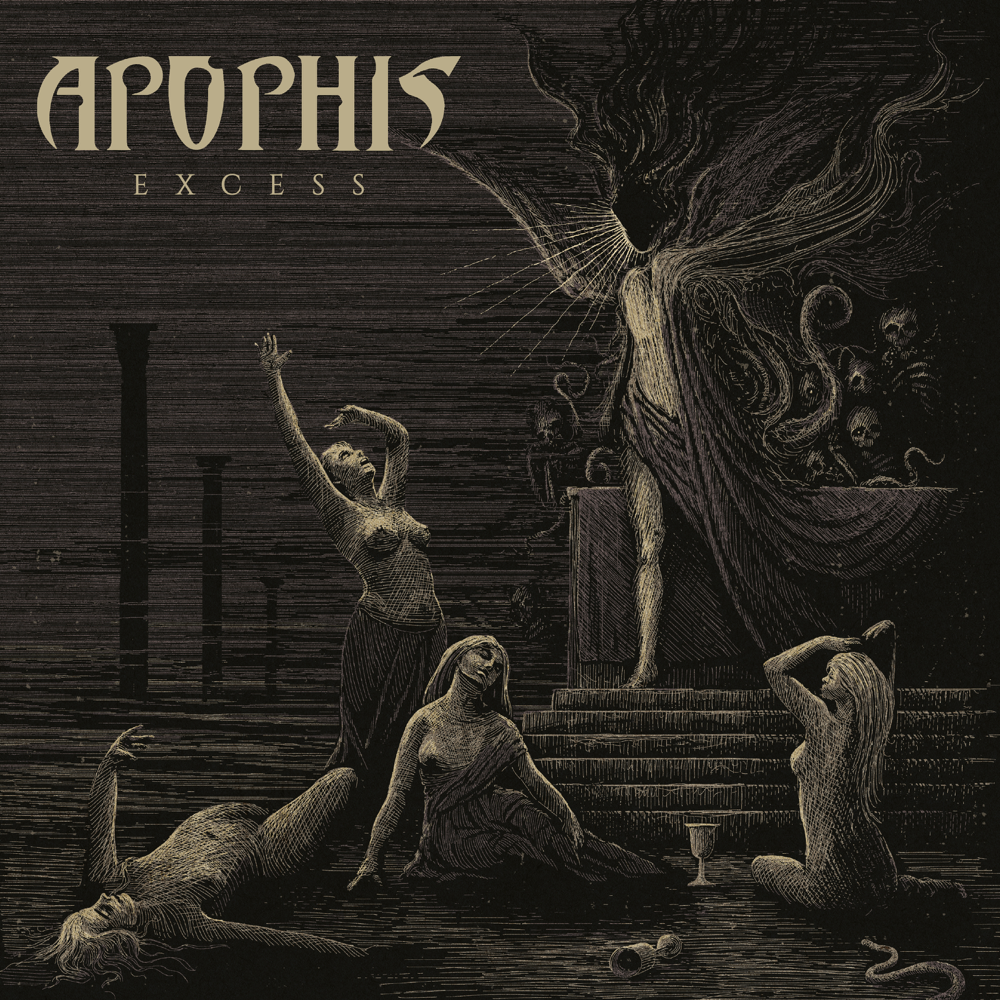 Death metal bursting with energy and excellent guitar work has always been a trademark of Apophis. Heavy melodies, dark and melancholic, yet aggressive at times, as well as impressive growls and screams, are typical for APOPHIS and hit straight into the metal heart.

The groovy drumming, charged with thundering double-bass parts, breath-taking changes in speed and stirring arrangements put the finishing touches to their songs. When Roger moved to London in 2009, the Serpent God decided to rest, reawakening for special occasions only as the members concentrated on other projects. Recently, the band recorded eight songs for their next full-length album, “Excess”, which, although dressed in modern sound, relocates the listener to the first days of Death Metal. This wall of sound, produced by Roger Kirchner and Dan Baune (Monument) in England and Germany and mastered by Dan Swanö (Unisound Studios), will crush you like a steamroller uniting the power and aggression of primaeval times with melodies of today, sending shivers down your spine. “Excess” was released on September 3rd 2021, via Massacre Records.

First of all, Apophis it’s old-school death metal, but with a bit of extra melody and solos, which are not too typical for death metal, which has always been very important to us. Our guitarists take a lot of inspiration from bands such as Pink Floyd. But since “Heliopolis”, our third album, we have had some orchestral parts in our music, mainly during the solos. Groove, melody and emotions, that’s it. This is music I enjoy listening to as it combines brutality and musicality. You can incorporate so many ideas into Death Metal. There are no limits.

We started working on the songs for Excess right after the release of “I Am Your Blindness”. So some of the songs are quite some years old, and we took a little break from the band. Then in 2017, Roger came up with the idea to record these songs as they are too good just to let them rust in the drawer. So we carefully updated the songs and the lyrics and started recording the drums in London and the rest in Germany. After that, we looked for a record company and found legendary brothers and sisters in Metal, Massacre Records. The pandemic further delayed things, so we ended up in 2021 releasing this album. As we all live far away from each other, rehearsing is not easy, especially with Roger. Therefore, the creative work was presented and discussed during conference calls. I can tell you more about it when we get together to write new material.

The lyrics are very personal, but we do not have a concept. The lyrics are about temptations, about being true to oneself. Other songs are about what the world has turned the narrator into. Some self-surrender, while others observe people who walk over dead bodies for their aims and convictions, like psychopaths, as ruthless managers. And two songs simply deal with death, as this is one of the fascinating topics. I love to sprinkle in quotes from literature and science here and there. If I had to give an overall theme, it would be humanity.

Living life with eyes open is enough to draw inspiration from. You have to see things, hear what is going on and feel life. All this goes into our music. We don’t force anything; we let it happen. When we arrange a song, we do everything the riffs and melodies ask for to create a song that fulfils us and pleases us. So the music more or less guides us. The basic guideline is feeling. The human abysses and shortcomings are inspirational for everything, lyrically. Man is a wolf to man. I take a lot of themes from what I read or see on TV. Musically, you either have an inspiration for an awesome riff or a cool melody, or you don’t, I would dare to say.

In regards to the artwork, Fabian Guschlbauer (guitars) was in close contact with Misanthropic-Arts so that our ideas regarding the title song would be realised in the best possible way. We didn’t want something like “Heliopolis” with the pink cover to happen again, although the idea behind it was right. The title song is about being true to yourself. This is the god of excess, debauchery, seduction, and so on. Forget restraint; forget moderation! Don’t think about tomorrow! Live now and without regrets! Live your life and enjoy it. This could then also go in the direction of greed or boundlessness. We wanted something mysterious again that leaves room for interpretation but also a direction reflecting the lyrics’ content. In a way, that is also one of the reasons for the monochrome look. The artwork was done by Misanthropic Arts, who had already worked for Katatonia, Dismember, Asphyx and many others.

We are not on a mission to convince others of a certain idea. We just love music and dedicate a good portion of our lives to it. Live and let live. Be true to yourself. Music is the universal language – of peace or hate. You decide which side you are on and how much space this may take up within you. I see how much bad news we are given every day. I can understand the escapists.

I can only speak for myself. When I was twelve or thirteen, I bought my first metal albums (then still as cassettes) like Black Sabbath and Ozzy Osbourne. When I was fifteen, I got a cassette with Helloween (Keeper of the Seven Keys) on one side and Slayer (Hell Awaits) on the other. And that was it. After a short and intense thrash metal phase, death metal came to our town in 1989 and 1990, and we were looking for the most extreme sound there was. That was Left Hand Path by Entombed and Altars of Madness by Morbid Angel. These albums blew me away! The energy was unbelievable! But I was very experimental from the very beginning. I used to stay around the stage for a long time after the shows at the Rockfabrik Ludwigsburg, so when I saw Morbid Angel there one night, the drum tech changed the drum heads and threw them around, so I asked him if he could have one. I got the drumhead for the snare, and I put it on my snare. I was proud as hell.

Music is one of the most essential things in life. No matter what you do or where you live. Music is all around you. In movies, in the cities, in every fxxking car. Music gives identification and a feeling of togetherness. Two days ago we played a show. There were five bands that night, and we ran on a very tight schedule. So when we finally started playing, there was already a delay of about 30 minutes. I suggested not to play an encore, but the others insisted. And when I saw the happy grin on the faces of some guys in the audience, feeling the song, diving into the emotion, I knew we had made the right decision.