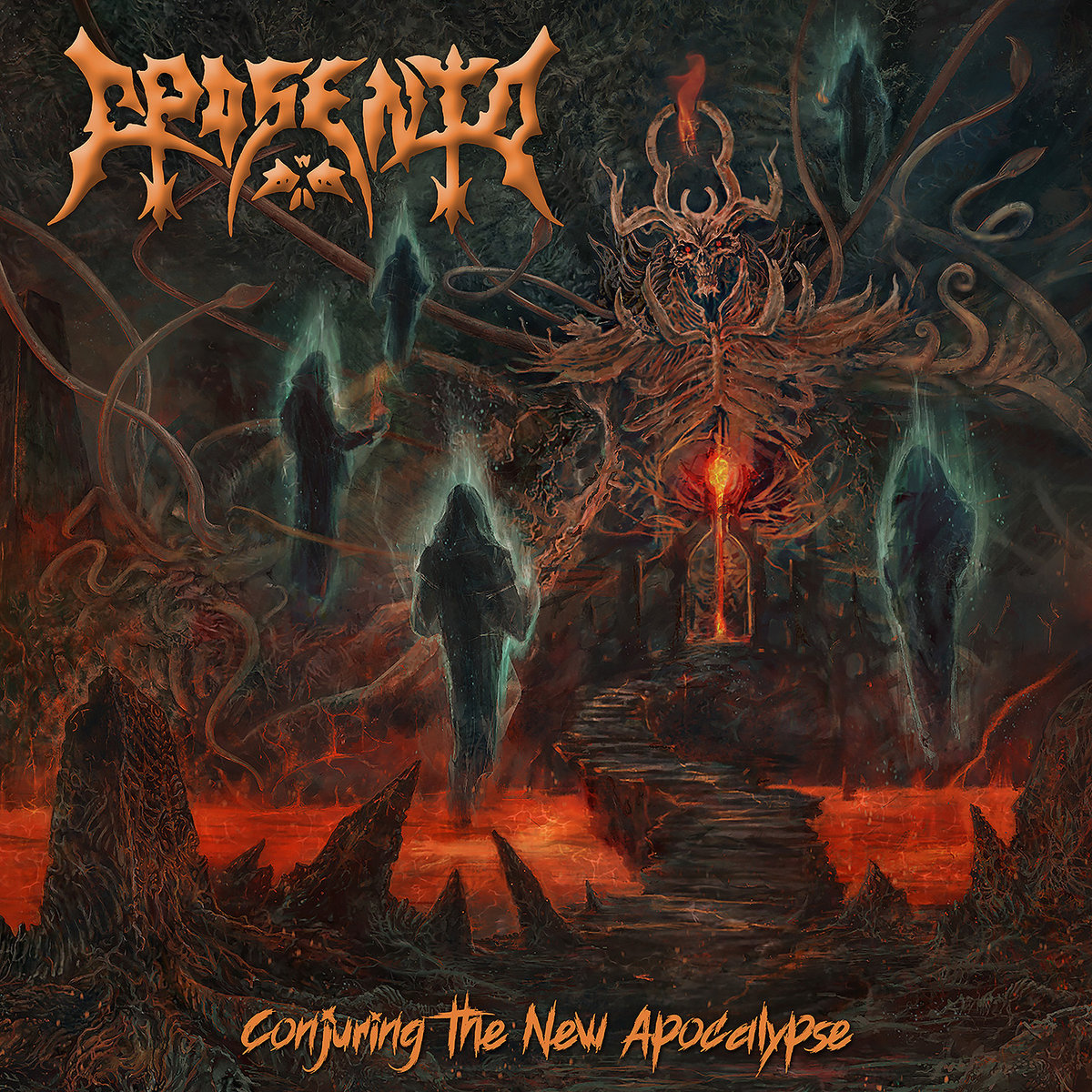 Aposento was born in the early 90s and, in a short time, began to record its first recordings, ‘Bloddy Ritual’ in 92 and ‘Eternal Agony’ in 93. After several changes in the line-up and several concerts with bands such as Death or Anacrusis. See the light ‘Welcome To Darkness in mid-94. This would lead the band to tour the country, sharing the stage with Cannibal Corpse, Samael, Anathema or Desultory, among others. In 97, after several changes in its ranks, the band decided to disband. Until 2012 they returned to activity. That same year his MCD ‘Return to Death’ appeared. In 2014, under the Xtreem Music label, their first full-length album with a homonymous title was released. They continue presenting their music, sharing tables with bands like Benediction, Cannibal Corpse, Sinister. In 2017, they recorded ‘Bleed to Death’, with which they collected great reviews and led them to play at festivals such as ‘Resurrection Fest.’ In 2020 his third studio work, ‘Conjuring the New Apocalypse’, was published.

It was challenging to find a compound name that, at the same time, turned out to be aggressive and attracted attention, at that time, names like Sepultura, Testament, Obituary, Death. Were already around, without having any real meaning other than its meaning, and thus Aposento emerged with that idea. It seemed right for the style of music as well.

‘Conjuring the New Apocalypse’ is the last album. It is a conceptual work where we consciously or unconsciously sought to return to the band’s origins, where we tried to transmit the old school Death Metal that marked us in its first beginnings of gestation. The work deals with how we live hell in life, making references to mythological aspects covering different cultures or traditions that Catholicism destroyed to take over them, destroying all ancestral vestiges of their true meaning.

It always has been a death metal band influenced by the American sound of the last decade that addressed the last century. We always try to capture what we would like to hear as an audience in our compositions, and over the years, it has always been our way of making music.

At the end of the 80s, we hardly listened to death metal. We were significantly influenced by the Thrash of the time with bands like Slayer, Testament, Exodus as time went by and discovering new bands like Obituary, Cannibal Corpse. We realised that our rebellion became more familiar with the style; hence we started to get involved and do death metal.

Initially, the lyrics were more marked by horror, gore, or Satanism. Little by little, they have been transformed into more metaphysical themes with an esoteric character and occult practices from an individualistic and personal point of view. They were reflecting on how religion has extinguished all vestige of the previous cultures that prevailed before the birth of Christianity. Also, popular legends and stories and literary works on dark arts and fantasy have influenced us to a great extent.

From the beginning of time, the human being has felt that need to find other focuses looking elsewhere. Initially, it was astrology or that impulse to know more through alchemy and later science. Without light, it is unthinkable to be able to reach darkness. For me, it is a dogmatic practice in which to try to find meaning in inexplicable things as opposed to what is measurable and logical—the search for an underlying spiritual reality that is deeper than the reason for the physical. Lyrically the works of people like Aleister Crowley, Johannes Nefastos, Austin Osman Spare, Hermes Trimegisto, among others, are great references when it comes to working on our compositions; also a great influence is the Left Hand Path current and fiction authors like Clive Barker, HP Lovecraft or Alan Moore.

The work of art fits perfectly with what we wanted to convey, it is the work of Naroa Etxebarria (naroetxebarria@gmail.com), and without a doubt, he has managed to capture the concept of the album in the image, we are very happy with the result. The lyrical line runs from a trip personal and interior in search of spirituality through various beliefs until the outcome where the Apocalypse is unleashed in life that we live, which is what the image reflects.

Metal is a mode of expression or rather a lifestyle, I do not think it is dangerous. Despite its violence, it is only something that makes us express our rage and anger in the form of music. The real problem lies in those who take things at face value.