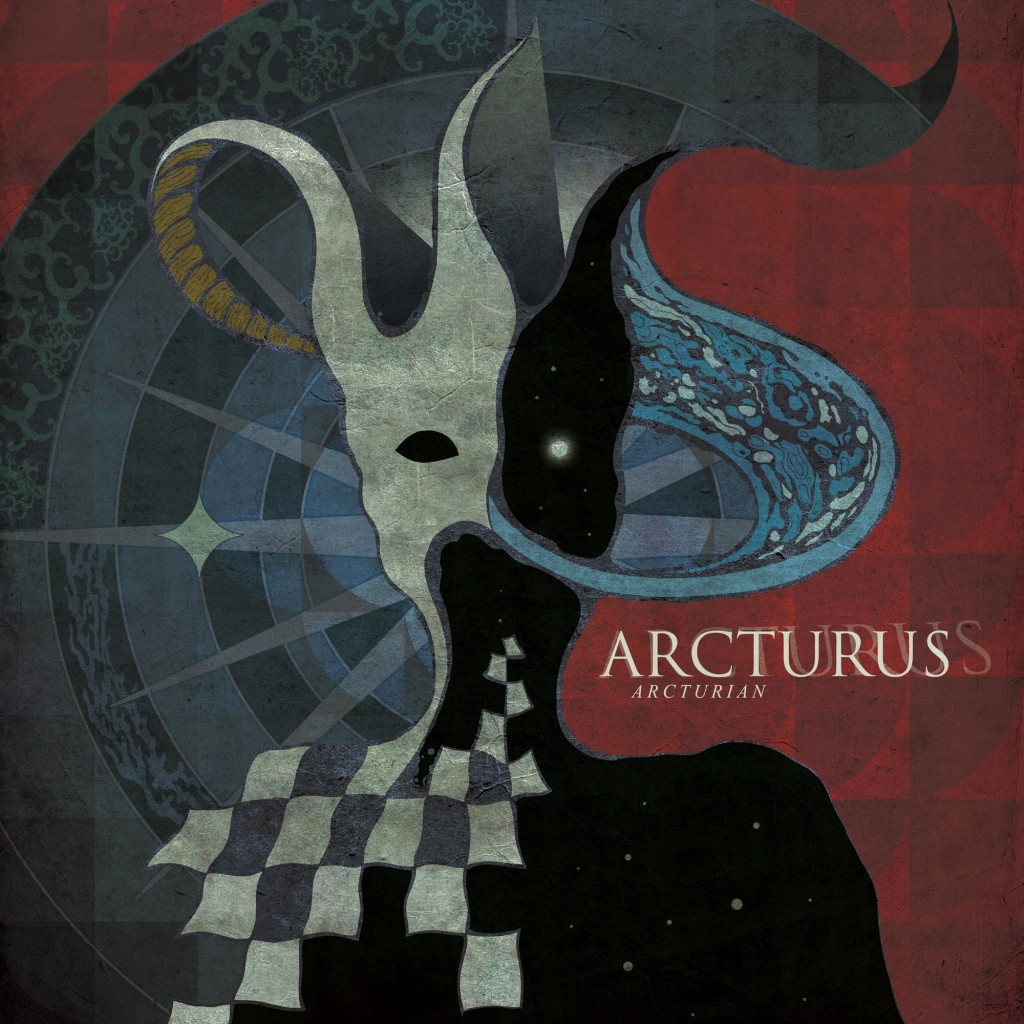 Guided by the supernatural

Norwegian avant-garde metal Arcturus is finally back after a decade with the awaited new album “Arcturian”. Formed in 1987, the first full-length was released in 1996. Current cosmic crew consist of former Dimmu Borgir member ICS Vortex and Mayhem drumming master Hellhammer alongside ex-Ulver and ex-Mortem members. HMA catch up with mastermind vocalist Simen “ICS Vortex” Hestnæ to discuss the cover album and various inspirations.

HMA: Hi Simen, and welcome to Heavy Music Artwork. About your latest album “Arcturian”, did you work on the cover and follow a process with the artist?

ICS Vortex: Yeah, Costin Chioreanu has been with us for a little while. He started out doing tour posters and then he just called us up and said that he wanted to be on the team, pretty much… he sent us stuff, and it was like “Woah, that’s perfect”.. It was perfect! He did the banner on the Facebook page, also perfect. He then called me and said “I would love to do the booklet and the cover artwork for the upcoming album “I’ll do it for free if I have to because I’m a fan and I just want to do this”.  For starters, when we have people that are that super dedicated, that’s a perfect starting point.

Of course, we paid him and he’s been working also really fast because we had some time issues but managed to deliver at every point. I’ve been a little hard to work with. First he made a drawing that was really cool, and I said, “Yeah, okay, that’s cool”, but then I changed my mind, “No, this is not good enough, It’s got to be something absolutely fantastic that I will be proud in 10, 20 years from now as well, because it will stand out”. I told him, “Sorry buddy”, I know that he can do even better. He was back in the thinking box and delivered what is now the cover, and I was almost torn in my eyes because it was perfect. We have a very good feeling about working with him, and hopefully, we can do a music video with him and he will do some animation because he gets to meet all the band. Hopefully, that will work, he has his own band, he wants to come on tour with us, maybe that will happen. Yeah.

HMA: Can you tell us more about the concept of the album.

ICS Vortex: I think I picked up where ‘Sideshows Symphonies’ left, it’s pretty much the same. I write about things that are close to me, friends own experiences, mostly it was a lot of drug-related issues actually. The darker side of it, without being too pompous, without being sentimental, just describing it. Friends who took too much of the good stuff and now… whatever… they fucked up. I’m thankful that they rise again also, usually, sometimes they do, and you know that’s the most beautiful part. As everybody does, it’s not how you fall, it’s how you rise and be great again.

ICS Vortex: I guess that’s kind of thread through whatever. One the song is about… just my reflection on the black metal theme in the early ’90s.

HMA: So how important is art in your perception and for the audience to experience your music?

ICS Vortex: Well, I don’t know if art comes like, scene expression? For me, it’s important to have the whole package when you are on the show. I mean I love that in Dimmu Borgir, we had the corpsepaint, certain roles and for me and Arcturus get the legacy going. I use a lot of metaphors, space-related stuff, sing about other stuff, I still use a lot of those metaphors to make it fit to Arcturus. So we will build on this and we have a lot of plans for light shows and props on stage. Of course for the masks and the whole weirdness, craziness, surrounding scenery on stage. We just want more of that pretty much. It works together very well, you go to concerts, the bigger the experience, the better for everyone. Hopefully, we keep on building and yeah, just make it bigger by every step we do.

HMA: Would you say that your music style is well translated in your covers?

ICS Vortex: Yeah, I think so… absolutely. I love all the artwork of Arcturus, it’s a progression and it’s been going in the same direction for a long time and I think it is well described. Maybe it’s a little on the space frontiers side, compared to the lyrics, but the overall music, it’s still very representative.

HMA: You mentioned a video before, are you going to release one for the single ‘The Arcturian Sign’?

ICS Vortex: Yes we are. Not ‘The Arcturian Sign’ song, but for ‘Crash Land’ is going to come out. We’ve talked to a video company right now about that, hopefully, that’s going to happen. As I said earlier Constin is going to make an animated video as well so at least two videos will be out. Probably not more than that, but if we can get this done, it’s pretty big production video for ‘The Crashland’ and stuff. They sent me first one script, then one more script, I had to go back and forth. “This is beautiful and blah blah blah”… “Ooh, I don’t want that”, because it doesn’t fit the style, nothing too commercial. I think it’s going to work, now we have some scripts that are so much better on me. The directors got the idea of what I want, it’s there to promote us. We’ll just have to wait and see, we might not going to be in the video ourselves because I don’t usually like metal videos, so uninteresting to me. Hopefully, it will turn out good.

HMA: Cool. So where do you see Arcturus in future, say in 5 years’ time considering you’re already involved in another music project?

ICS Vortex: No idea. I hope we are going to have a new record out at that time. We’re going to do this as long as it’s fun, as long as we have the creativity, as long as everybody’s friends. If not, if this is going to be like, ‘day job’ or whatever, then fuck it. Maybe we can wait another 10 years, or maybe in 3 years we can have new material, maybe the album will be finished. We’re ready to just work, and tell everybody that this is my first priority now, music wise. I’ll just keep everything else on hold as long as our careers is the way it is right now, because in my opinion, I’m just honoured to play with all the musicians because it’s so good.

As a band it’s so fun on stage, it was like it was with Dimmu Borgir back in the golden days when Nicolas Barker etc… and you have this fantastic team around you, everybody’s doing their job and it’s just magical. The best days it really was. And now a fantastic experience a couple of days ago in Lyon, it was just so uplifting, like spiritually. As long as it’s like that, it’s what I want to put my energy into it.

HMA: What do you think about the current Metal scene?

ICS Vortex: I see there’s a lot of super talented musicians. Extremely well playing their instruments and that, but I think if you ask every old guy, they always prefer old music. It’s a little bit like that for me as well. I have so many feelings attached to it of course. My life is so different now from then when I used to listen to or discover new music all the time. I think there’s still just a lot of old bands to be discovered too. I know what you mean, but I’m sorry to say that I don’t follow the scene as closely as I should. I know there’s probably fantastic bands out there that I will just miss because I don’t pay attention. I’m just in my little bubble. I just make music. Mostly I prefer silence when I am working or whatever, that’s the way the day goes.

HMA: What things inspire you besides other music? Is Norwegian culture part of your inspiration?

ICS Vortex: So much happened quickly in my early 20’s, 30’s, those ten years, I’m still digesting it… kind of… so that’s where I draw inspiration from, from all the weird stuff that was just constantly happening every day around me, being constantly on a lot of drugs and alcohol. The whole mix, the whole rock’n’roll, metal, having a lot of issues being young, insecure and all that, so I think these settings and all these situations I got into constantly, that’s where I draw my inspiration from. They’re from my mind, from the past really.

HMA: Okay ICS Vortex, thank you so much for your time, see you later!