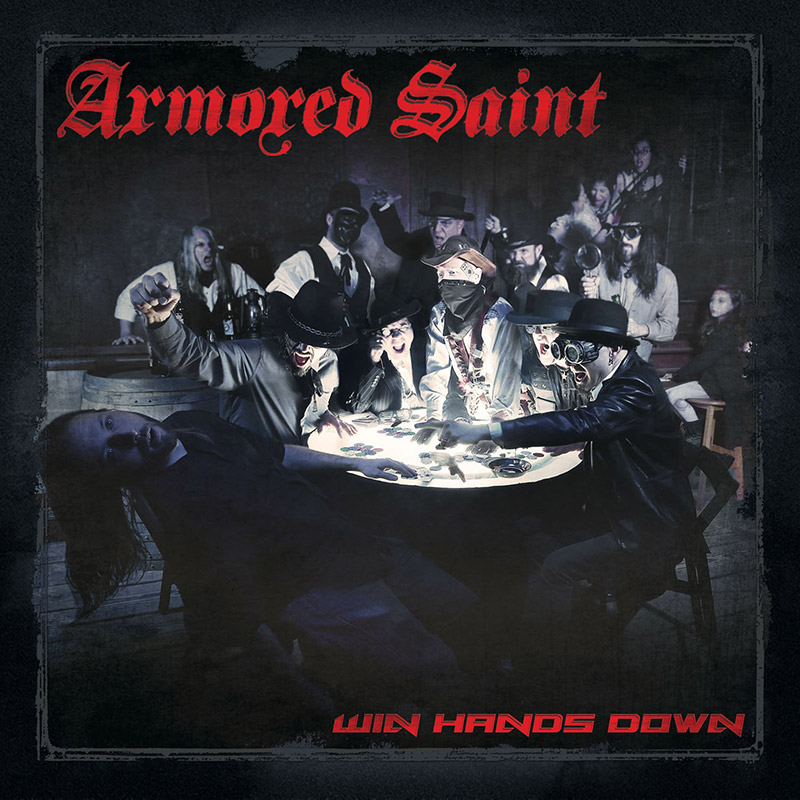 John Bush is a very familiar voice to metal fans worldwide, having spent more than a decade with Anthrax and being the voice of some of their most iconic tunes he has won himself a high place in the music scene. He is again leading the charge with his band Armored Saint , which last year released their seventh studio album ‘Win Hands Down’ (Metal Blade Records). The record is a perfect example of great production, great songwriting, creativity and exploration, merging new elements while remaining faithful to the band’s core, roots and sound. The band is now touring North America and they will also appear at Knotfest and Ozzfest before leaving for Japan and finally getting back to the US for a tour with Queensryche. They aren’t currently writing new material but they are working on a live album featuring performances from last year in Germany.  We spoke to John Bush a few days ago to find out more about this metal veteran and his Saints.

HMA: Your latest record ‘Win Hands Down’ (Metal Blade Records 2015) came out last year , how has it been received, are you happy with the response?

John Bush: Yes, it’s far exceeded any expectations we had.

HMA: How was writing a new album together after 5 years, did you all just find yourselves smoothly back in the process?

JB: Yes, we basically wait until we get an itch to work again. We really need the inspiration before we begin. We’re lucky that we don’t have to work under any sort of schedule so we just wait until the bug hits us.

HMA: How do you approach writing lyrics? You touch upon a variety of different themes, what inspires you?

JB: I write all the lyrics and for the most part these days they are all driven by my personal views on life and his experiences. Very, very little of it is based on fiction.

HMA: What can you tell me about the cover of ‘Win Hands Down’ and how involved are you in the creative process of your album’s artwork?

JB: I’m 100% involved. The idea and concept is something I came up with, the same with the last 3 releases really. Conceptually it’s really just a scene out of an alternate universe. A merging of the old west in America and the future akin to Blade Runner Los Angeles. Aesthetically I was inspired by the paintings by some of the masters, in particular the lighting and gestures from Rembrandt and Caravaggio. The photograph was taken and edited by my good friend and photographer, Stephanie Cabral.

HMA: You have seen the rock & metal music industry and scene evolve and change. How much do you think has changed for the best and for the worse?

JB: For the best, and we’re only speaking of the industry here, is because of the internet, we now have a vast selection of music at our fingertips and along with that we can get any information about this music in an instant. And not only that but with the changing of devices that we use in our daily lives, we can choose to enjoy this music just about anywhere. The worst is that because of the internet, the soul of music has been compromised. It used to be only a few people considered to be “artistic” created art (music), but because of technology, anyone can become an artist. It’s no longer very special. There’s a lot of great artists out there, don’t get me wrong, but there’s way too much clutter now. The industry has no choice anymore but to feed on the over consumption from the buying public. Art has become disposable. Making a living as an artist has become very difficult. There’s so many problems with pirating, loopholes in user agreements with streaming services, ridiculous royalty rate changes. There you go, my best and worst point of view.

HMA: Which can you say have been the highlights of Armored Saint through the many years of your career?

JB: Probably the biggest highlight is that we are still currently making records and touring all over the world 34 years after we started. Never imagined that would ever come to be.

HMA: You have always stayed true to your sound, which 3 songs would you choose that you feel best represent Armored Saint for someone who has no knowledge of the band?

HMA: Which band inspired you the most when you started?

JB: Me personally, before I picked up an instrument, Queen.

HMA: You have all known each other for a long time, do you still enjoy touring together and what do you like and dislike about being on the road?

JB: Yes I still enjoy touring and travelling to distant places. The best thing about it is seeing the world, different cultures and different environments. The worst part about touring is being away from my family, the lack of sleep and the sitting around waiting to perform

HMA: Do you have any new material; are you planning a new record?

JB: We are currently working on a live record which we recorded at several shows in Germany last year.

HMA: What are your future touring plans?

JB: For now, we are headlining the kick-off party at Southern California’s Ozzfest meets Knotfest in late Sept. Oct 8 sees us playing at Loud Park festival in Tokyo, our first time ever playing Japan and in November we tour as direct support with Queensryche in the US for 4 weeks.