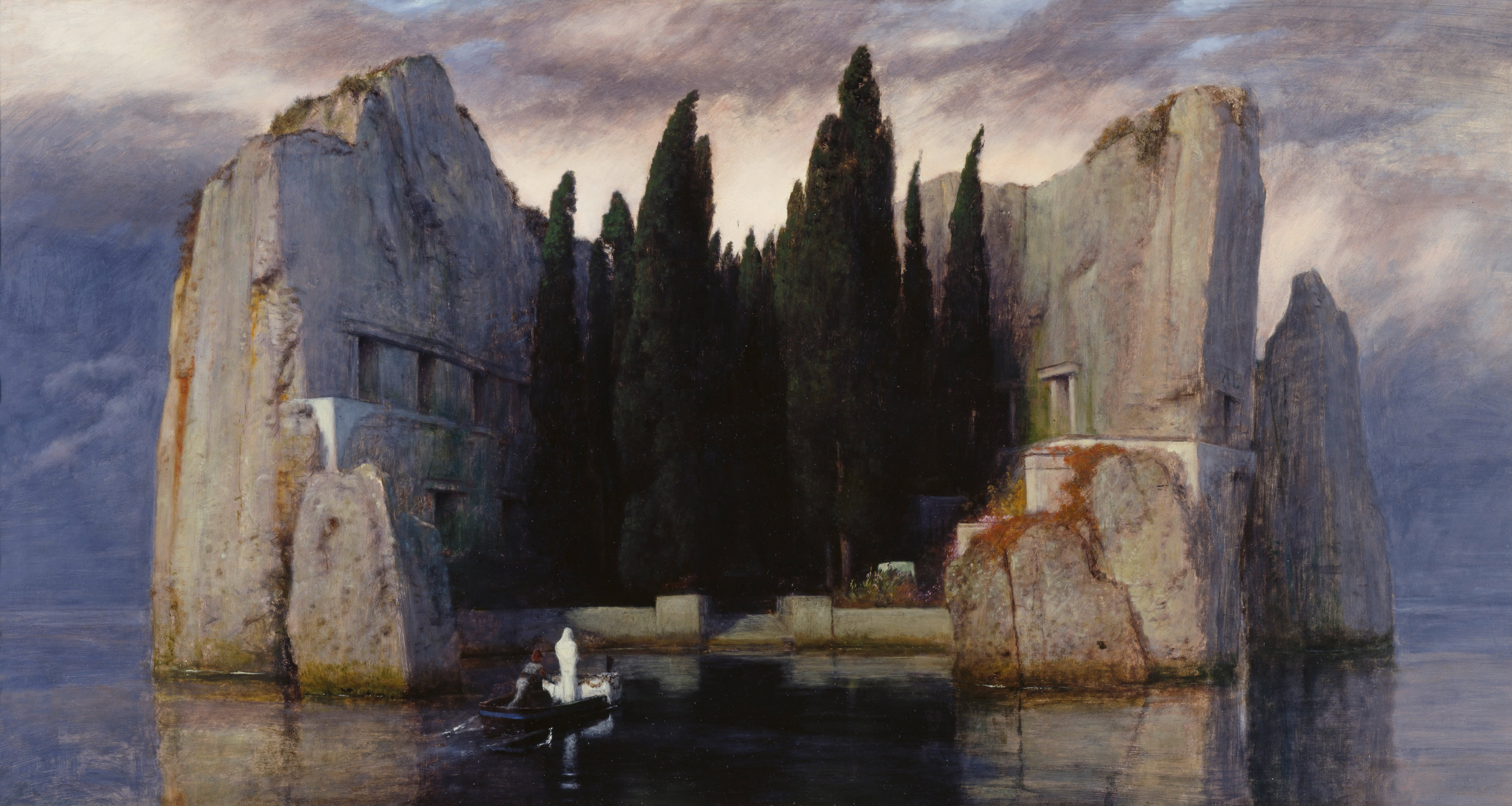 The Island of the Dead, by Arnold Bocklin

The Swiss painter Arnold Bocklin died on this day in 1901, so today’s choice of painting is his masterpiece The Island of the Dead. Bocklin painted it in 1880, while convalescing on the island of Ischia after having caught the flu on a sketching trip to Naples. The composition proved so popular that he eventually painted five separate versions of the work (one of which ended up, with a certain ghoulish appropriateness, given its subject matter, in the private collection of Adolf Hitler). The picture reproduced here, which is the earliest of the five, can be found in the Kunstmuseum at Basel, the artist’s native town.

The Swiss painter Arnold Bocklin died on this day in 1901, so today’s choice of painting is his masterpiece The Island of the Dead. Bocklin painted it in 1880, while convalescing on the island of Ischia after having caught the flu on a sketching trip to Naples. The composition proved so popular that he eventually painted five separate versions of the work (one of which ended up, with a certain ghoulish appropriateness, given its subject matter, in the private collection of Adolf Hitler). The picture reproduced here, which is the earliest of the five, can be found in the Kunstmuseum at Basel, the artist’s native town.

{gallery}masters/arnold/art{/gallery}Bocklin is no longer a very well known painter, but he enjoyed an extremely high reputation in the later years of the nineteenth century. Originally trained at the Kunstakademie in Dusseldorf, he painted mythological subject paintings and landscapes in a moodily romantic style that was to remain entirely unaffected by the innovations of his contemporaries, the French Impressionists. He was a widely travelled artist, who found his ideal landscape amidst the myriad classical ruins and coastal towns of Italy, where he lived and worked for much of his life – and memories of which he imaginatively synthesised to create The Island of the Dead, which simultaneously evokes the Borromean islands in Lake Maggiore and the cemetery island of San Michele in the Venetian lagoon, with its towering cypress trees, so dark a hue of green they appear almost black. The work is thought to have been created in response to a request from Bocklin’s romantically inclined friend Marie Berna, who wanted a painting to provoke a mood of bittersweet reverie. Its title was thought up by the art dealer Fritz Gurlitt.

Bocklin himself simply referred to it as “a picture for dreaming about.” Bocklin was in many respects a backward-looking, nostalgic, conservative artist, but in developing a kind of fantasy landscape intended to express intense, personal mood – to indicate a topography of emotion, rather than place – he anticipated the intense introversion, the interest in heightened or altered states of awareness such as dreams and hallucinations, that was to absorb so many painters of the avant-garde in the years around the turn of the twentieth century. Bocklin was revered by many of the leading figures in the Symbolist movement, was greatly admired by, among others, Vincent Van Gogh and Edvard Munch, and was cited by the proto-Surrealist Giorgio de Chirico as the principal inspiration for his own enigmatic depictions of a dislocated, dream-like world. The spirit of Bocklin’s work was encapsulated by the art historian Heinrich Wolfflin, who wrote in 1897 that the artist’s pictures always stem “from an inner image with the figures always seen together with landscape … The fabulous beings are not simply nude figures with mythological attributes put into a given landscape, but rather they have been born out of a contemplation of the elements, impregnated with the particular character of the momentary atmospheric mood and so are altogether inimitable and untranslatable.” There are no nude figures in The Isle of the Dead, a concise and morbidly poetic reflection on the pathetic theme of the last voyage. A silhouetted figure in white – a figure that will reappear many times, incidentally, in the work of Bocklin’s admirer Giorgio de Chirico – stands upright in the hearse boat that approaches the island, a coffin balanced across its prow. The painting’s subject is the mystery that confronts all human beings as they approach the threshold of death. The figure in white robes, a costume which evokes winding sheets, is at once echoed by the upright forms of the towering cypress trees and engulfed by them – a vivid metaphor for a human soul, disappearing into a mysterious void. The sea seems as still and glaucous as a lake of oil.

The rocks of the island seem to part, the very mineralogy of the painting conveying the idea of a final return to the bosom of the earth. The mood of the picture reminds me of the lines from Wordsworth’s “Lucy” poem: “No motion has she now, no force; / She neither hears nor sees; / Rolled round in earth’s diurnal course, / With rocks, and stones, and trees.” Bocklin spent much of his life attempting to escape the real world of the nineteenth century – scarred by heavy industry and vast new urban agglomerations, torn by war and revolution – into an ideal past. In many respects, his attitude to the age in which he lived was identical to that of his great friend Jacob Burckhardt, author of The Civilisation of the Renaissance in Italy,who was also fascinated by the past – in thrall to the idea of a world that seemed both more fascinating and more enchanted than that of the later nineteenth century. “I want to get away from all of them,” wrote Burckhardt, “from the the radicals, the Communists, the industrialists, the intellectuals, the philosophers, the sophists, the state fanatics, the idealsist, from every ‘ist’ and ‘ism’”. Perhaps the same escapist desires animated Bocklin when he painted The Island of the Dead, which could be said to enshrine a fantasy of escape as well as one of death – a fantasy of being able to glide, effortlessly, through the portals of time, and travel back to some secluded, sea-surrounded Arcadia. Incidentally, Bocklin inscribed his own initials on the portico of one of the crypts, cut into the face of the cliff on the right of the scene – forever laying claim to a place on the island of his dreams.