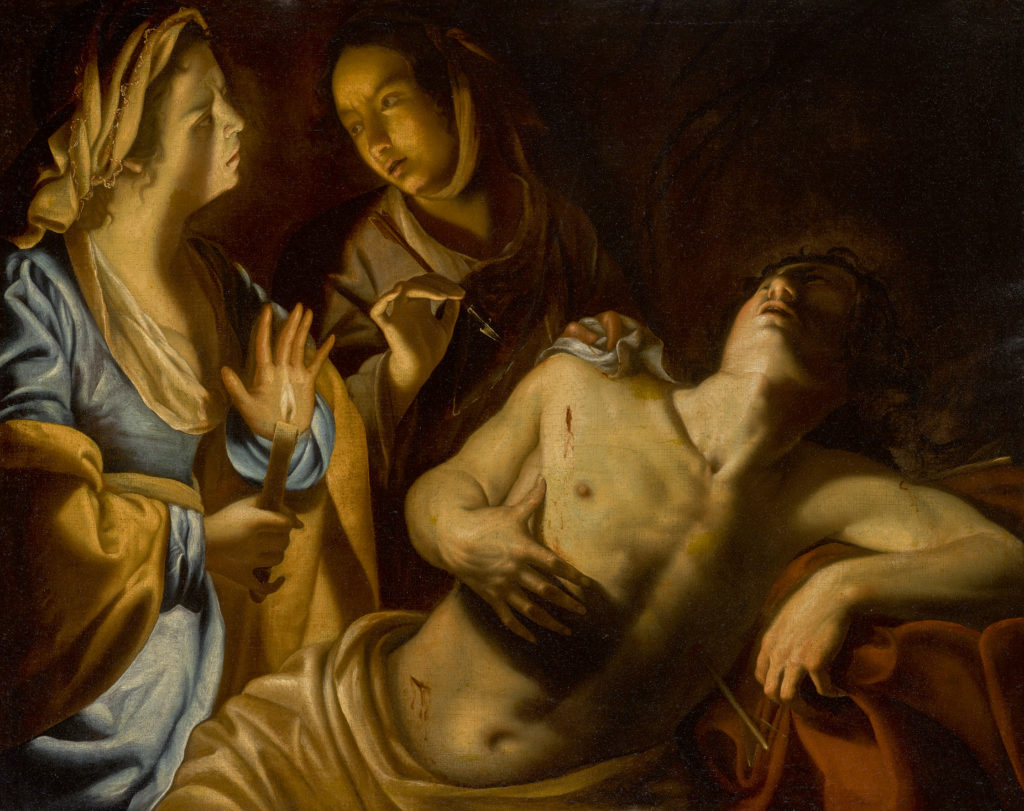 Artemisia Gentileschi (July 8, 1593–c.1656) was an Italian Baroque painter, today considered one of the most accomplished painters in the generation after Caravaggio. In an era when female painters were not easily accepted by the artistic community or patrons, she was the first female painter to become a member of the Accademia di Arte del Disegno in Florence. She painted many pictures of strong and suffering women from myth and the Bible – victims, suicides, warriors – and made a speciality of the Judith story. Her best-known image, Judith Beheading Holofernes shows the decapitation of Holofernes, a scene of horrific struggle and blood-letting.” That she was a woman painting in the 17th century and that she was raped herself and participated in prosecuting the rapist long overshadowed her achievements as an artist. For many years she was regarded as a curiosity. Today she is regarded as one of the most progressive and expressionist painters of her generation.

A research paper by Roberto Longhi, an important Italian critic, dated 1916, named Gentileschi padre e figlia (Gentileschi father and daughter) described Artemisia as “the only woman in Italy who ever knew about painting, coloring, doughing and other fundamentals”. Longhi also wrote of Judith Slaying Holofernes: “There are about fifty-seven works by Artemisia Gentileschi and 94% (forty-nine works) feature women as protagonists or equal to men”(Bissell, 112). These include her works of Jaels and Sisera, Judith (Judith and her Maidservant), and Esther. These characters intentionally lacked the stereotypical feminine traits—sensitivity, timidness and weakness—and were courageous, rebellious, and powerful personalities (Bissell, 112-3). A 19th century personality commented on Artemisia’s Magdalene stating, “no one would have imagined that it was the work of a woman. The brush work was bold and certain, and there was no sign of timidness” (Bissell, 112). She was well aware of how females and female artists were viewed by men therefore explains why her works in the beginning of her career were bold and defiant (Bissell, 113).

Who could think in fact that over a sheet so candid, a so brutal and terrible massacre could happen […] but – it’s natural to say – this is a terrible woman! A woman painted all this?… there’s nothing sadistic here, instead what strikes the most is the impassibility of the painter, who was even able to notice how the blood, spurting with violence, can decorate with two drops the central spurt! Incredible I tell you! And also please give Mrs. Schiattesi – the conjugal name of Artemisia – the chance to choose the hilt of the sword! At last don’t you think that the only aim of Giuditta is to move away to avoid the blood which could stain her dress? We think anyway that that is a dress of Casa Gentileschi, the finest wardrobe in the Europe during 1600, after Van Dyck.

Feminist studies increased the interest towards Artemisia’s artistic work and life. Such studies underlined her suffering of rape and subsequent mistreatment, and the expressive strength of her paintings of biblical heroines, in which the women are interpreted as willing to manifest their rebellion against their condition. In a research paper from the catalogue of the exhibition “Orazio e Artemisia Gentileschi” which took place in Rome in 2001 (and after in New York), Judith W. Mann gives a feminist opinion of Artemisia:

An opinion like that presupposes that the full creative potential of Artemisia is only about strong capable women, at the point that seems impossible to imagine her busy doing conventional religious images, like a Virgin Mary with a Baby or a virgin submissively waiting for the Annunciation; and besides it is said that the artist refused to modify her personal interpretation of those subjects to conform to the preferences of a client base presumably composed by males. The stereotype caused a double restrictive effect: it both induced the critics to doubt about the attribution of the paintings not corresponding to described model, and to give an inferior value to the ones not found on the cliché.

Because Artemisia returned again and again to violent subject matter such as Judith and Holofernes, a repressed-vengeance theory has been postulated. However, some art historians suggest that she was shrewdly playing on her fame from the rape trial to cater to a niche market in sexually-charged, female-dominant art for male patrons.

The most recent critic, starting from the difficult reconstruction of the entire catalogue of the Gentileschi, tried to give a less reductive reading of the career of Artemisia, placing it more accurately in the context of the different artistic environments in which the painter actively participated. A reading like this restores Artemisia as an artist who fought with determination, using the weapon of personality and of the artistic qualities, against the prejudices expressed against women painters; being able to introduce herself productively in the circle of the most respected painters of her time, embracing a series of pictorial genres which were probably more ample and varied than her paintings suggest.