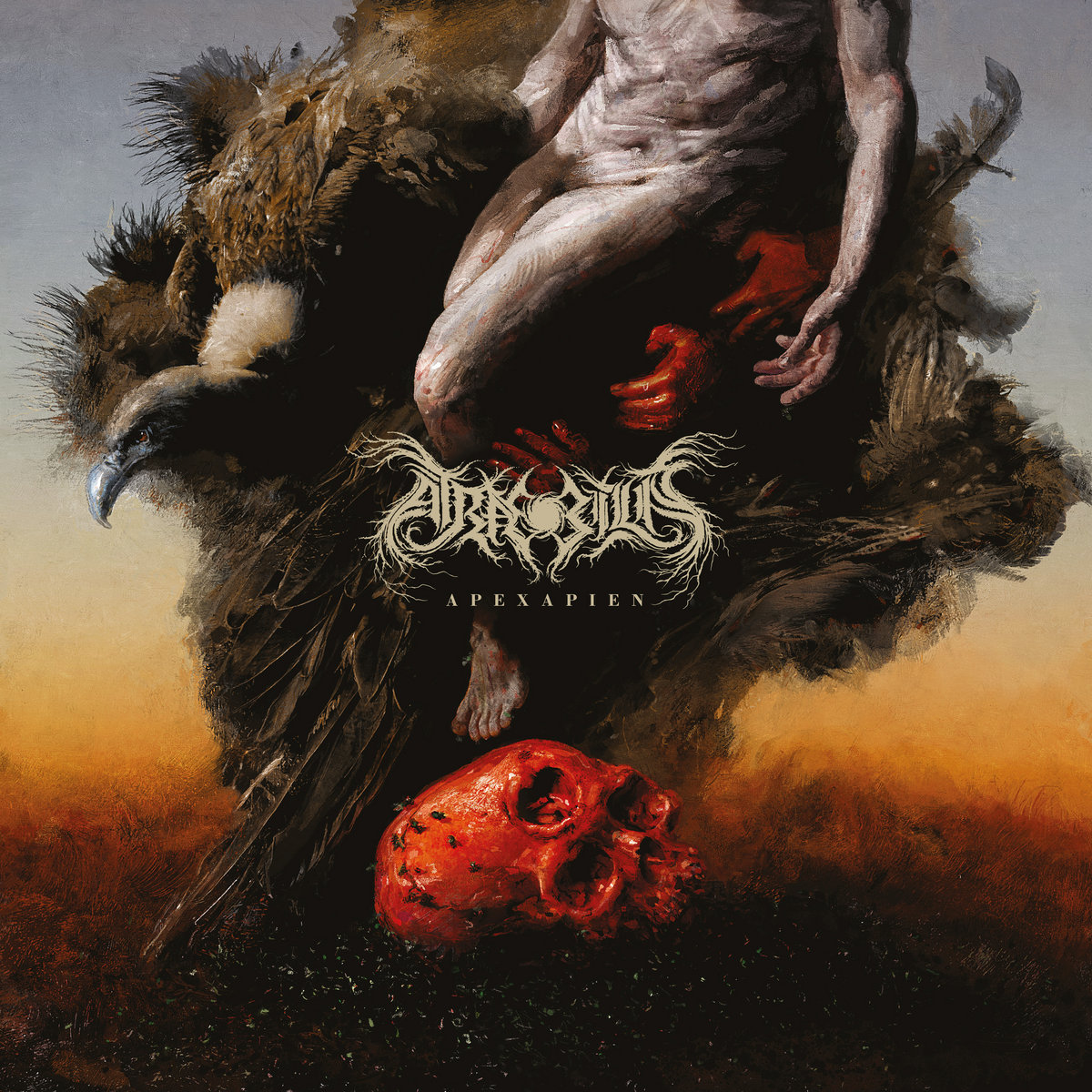 Our new record Apexapien 2021 is out now through 20 Buck Spin. It’s our first full-length album, and we’d like to think that it picks up where the standards of death metal started to get lazy. That is, we’ve tried to take the helm and recourse. Critics typically lump us in the ‘technical’ spectrum of the genre, but that’s not how we see it – This is heavy music for active listeners. Apexapien’s music was crafted in band rehearsals. No outside tools like tablature programs or exterior producers were used to finesse the material.

For bands who take themselves seriously, our lyrics are about consciousness, embodiment and disembodiment; we like to explore worlds without bounds and tow the line (or ‘the silver cord’, you could say) between earthly experience and the afterlife. These themes are perfect for storytelling, as there are liberties to write about enlightenment, horror and karma. Both of our releases have been ‘concept’ records, meaning that each song is one chapter of a story. Divinihility narrative bisects the mind and passes through death’s gate as two parallel spirits. One of these spirits is reborn as a maggot inside one’s own corpse, with the other watching over it. Apexapien’s narrative is about a seer who’s initiated martyrdom by having their third eye opened. The eye offers ‘sight’ to cancer and a curse to imbibe it. In purging the earth, by quite literally gobbling at ulcers and drinking from abscesses, the seer spites the gods for a malignant malformation and putrefies the heavens with septic transmigration through a sky burial.

We try not to overthink things musically. When we have over 30 minutes of instrumental compositions that we’re happy with, it’s time to record a demo version of the album. The foundation of these compositions is developed from guitar and drums practising together. This takes as long as it takes. After this, lyrics are built from books and psychedelic stimulation. Psilocybin is the most effective compound for us as its voice isn’t rushed, and its reverberation is expansive and cogent. This story drafting can take a few months of reading and writing before lyrics are fitted to the recorded demos. This method has been used across both of our releases, so I suppose the rehearsal routine and tripping phases before recording could be considered ritualistic. The recording process itself, not so much. Our mindset during the production process is to capture our songs to the best of our capacity and the capacities of everyone involved. There is no option to settle for anything less. To give you an idea of the effort we put into Apexapien, three different engineers mixed it before meeting our expectations.

We have no specific fixations, and my personal philosophies change with the more of life that I experience. I believe that our purpose here is to make meaningful connections with people. Music just happens to be my primary tool for that. In my sphere, music plays all day, every day. And when music is not playing, I’m working in a parallel field as an acoustical consultant (a glorified title for a sound scientist). So there’s no compartmentalisation from music or sound, from my philosophies. It’s one.

Heavy music has always been welcoming of me. It’s been the most consistent light of my life. Not darkness. My parents weren’t musical whatsoever, but an elder stepbrother (RIP Gareth) would often visit on weekends to drop acid and listen to records from bands like Mogwai and Metallica. As a very young teenager, staring at the ceiling and soaking in songs together was truly awesome. So, I guess my first real connection with music was developed in that backyard bungalow with him. Unlike the dream-pop, folk and post-rock he also shared with me, heavier bands were clearly the architects of far more exciting paradigms – I discovered the language of ‘riffs’. I quickly used my freedoms to mine the Internet and retail shelves for evermore-interesting riffs. I was obsessing over the unhinged moments in Cryptopsy’s ‘Blasphemy Made Flesh’ and the catchy grooves of Deicide’s ‘Once Upon the Cross’, within no time. But my world changed forever when I queued up a folder of ‘Disgorge’ .mp3s into Winamp one afternoon. This folder was a mixture of tracks from US Disgorge’s ‘Womb Full of Scabs’ and Mexico Disgorge’s ‘Chronic Corpora Infest’ albums. I had never, ever heard anything so sick. Both bands changed my life. The bar was set.

Music is evocative, and its magic is unexplainable. To box it in as just entertainment would be ignorant – Everything vibrates, so it is everything. Don’t forget that we’re each just one small key within a larger cosmic instrument. Music heals bodies, influences cognition and connects people wordlessly. As hermetic principles remind us, ‘As above so below’.https://atraebilisdeath.bandcamp.com