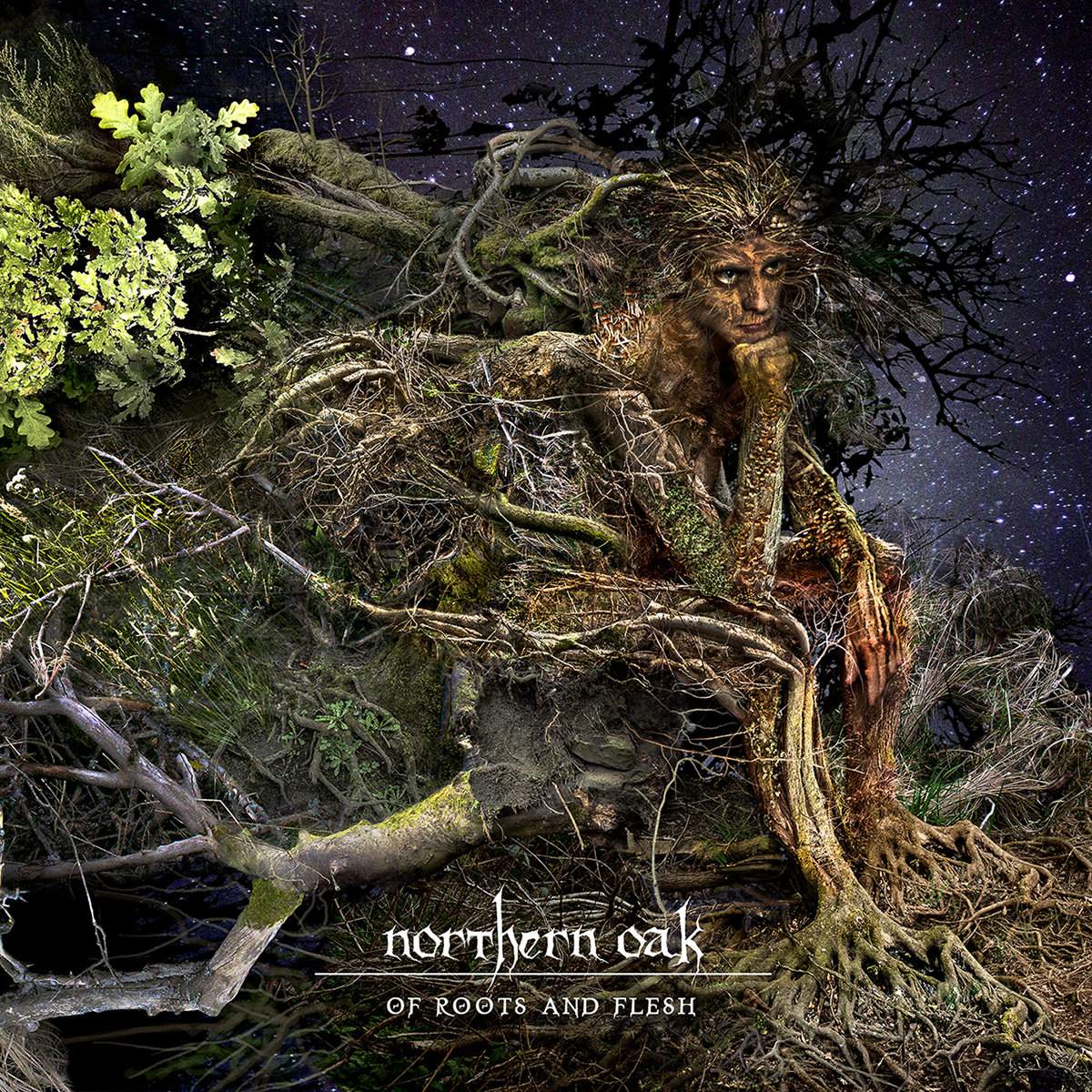 In just over one month English progressive folk metallers Northern Oak will release ‘Of Roots And Flesh’ and without a doubt one of the definitive highlights of the album is the cover artwork. The band comments: “When discussing the concept for the album artwork, we wanted to come up with something that would reflect the songs on the album and their subject matter. Having settled on the title ‘Of Roots And Flesh’, we felt it would be appropriate to maintain the theme of ‘roots’ through the artwork, and eventually decided that a figure emerging from a chaotic mass of roots and branches would visually represent the struggle between humanity and nature that features in many of the songs on the album. We also felt that the concept would harken back to imagery of the Green Man, a pagan deity often associated with rebirth.”

The South Yorkshire sextet discussed their ideas with artist Augustinas Našlėnas, who would then bring the concept to fruition.

Augustinas comments: “For my illustrations I mostly get the inspiration from my favourite surrealist artists like Leonora Carrington, Max Ernst and others; Mainly people who drew upon the pre-Christian belief systems and magic traditions of various cultures.”

“My work is mostly digital graphics and digital photo-montage. Photographic image twisted and turned into something less familiar and more marvellous.”

“When Northern Oak approached me with the commission for their new album, they pretty much had the concept of the layout and imagery worked out. I liked the brief instantly because it was clear that they did not want a ‘standard’ heavy metal type design. They were after a much more ‘folky’, fairy-tale like, but still classy and monumental look. The idea appealed to me instantly.”

“I did pretty much what I always do when I set out to design new images – picked up my cameras and went out to find the visual material. I knew that for this particular project I would need a load of pictures of forest, bush, roots, branches and even some overgrown ruins. What better place in Sheffield to look for these things than Rivelin valley. The whole design is constructed out of dozens of fragments taken from photos I took in and around Rivelin.”

Earlier this month the band released a lyric video for ‘Nerthus’, the first offering from the forthcoming record, which is set for release on 4th October 2014.

The recording of the new album was entirely funded through a Kickstarter campaign run by the band. The incredible show of support from their loyal and ever growing fan base allowed Northern Oak to record the album at Skyhammer Studios with renowned producer Chris Fielding (Primordial, Electric Wizard, Conan).

Ranging from existential rage on ‘The Gallows Tree’, relentless doom and sorrow on ‘Taken’ to a desire to see the best of humanity in the title track, ‘Of Roots And Flesh’ rewards with a seamless blending of vocal styles and a fusion of electric and acoustic guitars, flutes, violins and even melodeons as the band take you on a musical journey through the nature of struggle.