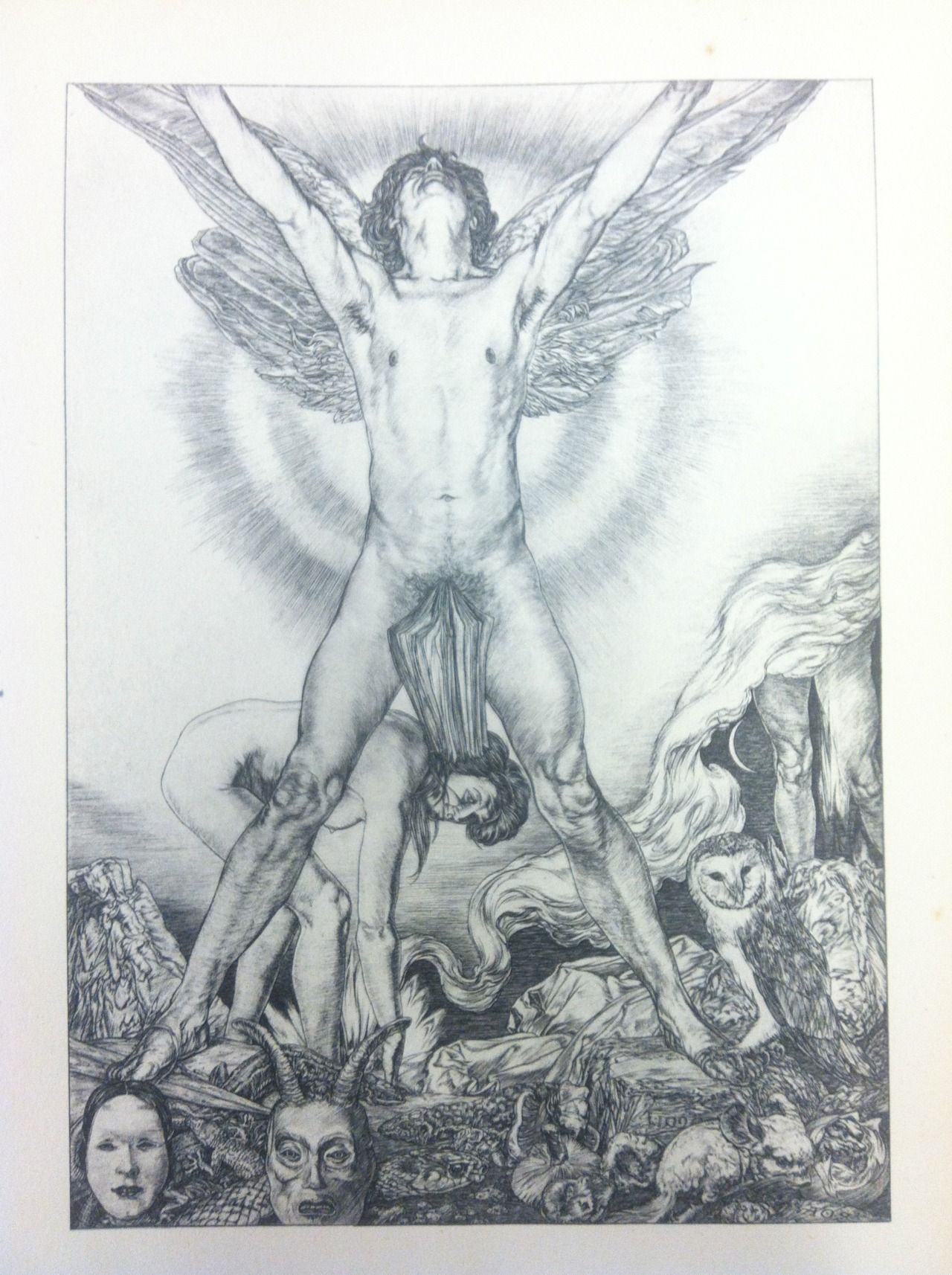 Spare’s work is remarkable for its variety, including paintings, a vast number of drawings, work with pastel, a few etchings, published books combining text with imagery, and even bizarre bookplates. He was productive from his earliest years until his death. According to Haydn Mackay, “rhythmic ornament grew from his hand seemingly without conscious effort.”

Spare was regarded as an artist of considerable talent and good prospects, but his style was apparently controversial. Critical reaction to his work in period ranged from baffled but impressed, to patronizing and dismissive. An anonymous review of The Book of Satyrs published in December 1909, which must have appeared around the time of Spare’s 23rd birthday, is by turns condescending and grudgingly respectful, “Mr. Spare’s work is evidently that of young man of talent.” However, “What is more important is the personality lying behind these various influences. And here we must credit Mr. Spare with a considerable fund of fancy and invention, although the activities of his mind still find vent through somewhat tortuous channels. Like most young men he seems to take himself somewhat too seriously”. Our critic ends his review with the observation that Spare’s “drawing is often more shapeless and confused than we trust it will be when he has assimilated better the excellent influences upon which he has formed his style.”

Two years later another anonymous review (this time of The Starlit Mire, for which Spare provided ten drawings) suggests, “When Mr. Spare was first heard of six or seven years ago he was hailed in some quarters as the new Beardsley, and as the work of a young man of seventeen his drawings had a certain amount of vigour and originality. But the years have not dealt kindly with Mr. Spare, and he must not be content with producing in his majority what passed muster in his nonage. However, his designs are not inappropriate for the crude paradoxes that form the text of this book. It is far easier to imitate an epigram than to invent one.”

In a 1914 review of The Book of Pleasure, the critic (again anonymous) seems resigned to bewilderment, “It is impossible for me to regard Mr. Spare’s drawings otherwise than as diagrams of ideas which I have quite failed to unravel; I can only regret that a good draughtsman limits the scope of his appeal”. From October 1922 to July 1924 Spare edited, jointly with Clifford Bax, the quarterly, Golden Hind for Chapman and Hall publishers. This was a short-lived project, but during its brief career it reproduced impressive figure drawing and lithographs by Spare and others. In 1925 Spare, Alan Odle, John Austen, and Harry Clarke showed together at the St George’s Gallery, and in 1930 at the Godfrey Philips Galleries. The 1930 show was the last West End show Spare would have for 17 years.

Spare’s obituary printed in The Times of 16 May 1956 states:
Thereafter Spare was rarely found in the purlieus of Bond St. He would teach a little from January to June, then up to the end of October, would finish various works, and from the beginning of November to Christmas would hang his products in the living-room, bedroom, and kitchen of his flat in the Borough. There he kept open house; critics and purchasers would go down, ring the bell, be admitted, and inspect the pictures, often in the company of some of the models – working women of the neighbourhood. Spare was convinced that there was a great potential demand for pictures at 2 or 3 guineas each, and condemned the practice of asking ₤20 for “amateurish stuff”. He worked chiefly in pastel or pencil, drawing rapidly, often taking no more than two hours over a picture. He was especially interested in delineating the old, and had various models over 70 and one as old as 93.

But Spare did not entirely disappear. During the late 1930s he developed and exhibited a style of painting based on a logarithmic form of anamorphic projection which he called “siderealism”. This work appears to have been well received. In 1947 he exhibited at the Archer Gallery, producing over 200 works for the show. It was a very successful show and led to something of a post-war renaissance of interest. Public awareness of Spare seems to have declined somewhat in the 1960s before the slow but steady revival of interest in his work beginning in the mid 1970s. The following passage in a discussion of an exhibit including Spare’s work in the summer of 1965 suggests some critics had hoped he would disappear into obscurity forever. The critic writes that the curator of the exhibit

has resurrected an unknown English artist named Austin Osman Spare, who imitates etchings in pen and ink in the manner of Beardsley but really harks back to the macabre German romanticism. He tortured himself before the first war and would have inspired the surrealist movement had he been discovered early enough. He has come back in time to play a belated part in the revival of taste for art nouveau.

Robert Ansell summarized Spare’s artistic contributions as follows:
During his lifetime, Spare left critics unable to place his work comfortably. Ithell Colquhoun supported his claim to have been a proto-Surrealist and posthumously the critic Mario Amaya made the case for Spare as a Pop Artist. Typically, he was both of these – and neither. A superb figurative artist in the mystical tradition, Spare may be regarded as one of the last English Symbolists, following closely his great influence George Frederick Watts. The recurrent motifs of androgyny, death, masks, dreams, vampires, satyrs and religious themes, so typical of the art of the French and Belgian Symbolists, find full expression in Spare’s early work, along with a desire to shock the bourgeois.

From his early years, Spare developed his own magico-religious philosophy which has come to be known as the “Zos-Kia Cultus”, a term coined by the occultist Kenneth Grant. Raised in the Anglican denomination of Christianity, Spare had come to denounce this monotheistic faith when he was seventeen, telling a reporter that “I am devising a religion of my own which embodies my conception of what we are we were, are, and shall be in the future.”

Key to Spare’s magico-religious views were the dual concepts of Zos and Kia. Spare described “Zos” as the human body and mind, and would later adopt the term as a pseudonym for himself. Biographer Phil Baker believed that Spare derived the word from the Ancient Greek words zoe, meaning life, and zoion, meaning animal or beast, with Spare also being attracted to the exotic nature of the letter “z”, which rarely appears in the English language. The author Alan Moore disagreed, believing that the term “ZOS” had instead been adopted by Spare to counterbalance his own initials, “AOS”, in which the A would represent the beginning of the alphabet, and the Z would represent the end. In this way, Moore argued, Spare was offering an “ultimate and transcendent expression of himself at the extremities of his own being.”

Spare used the term “Kia”, which he pronounced keah or keer, to refer to a universal mind or ultimate power, akin to the Hindu idea of Brahman or the Taoist idea of the Tao. Phil Baker believed that Spare had developed this word either from Eastern or Cabalistic words such as ki,chi, khya or chiah. Alternately, he thought that it might have been adopted from Madame Blavatsky in her book The Secret Doctrine, which refers to the idea of an ultimate power as Kia-yu.

In 1964, the Greenwich Gallery held an exhibition of Spare’s work accompanied by a catalogue essay by the Pop Artist Mario Amaya, who believed that Spare’s artworks depicting celebrities, produced in the late 1930s and 1940s, represented “the first examples of Pop art in this country.” Furthermore, he proclaimed that Spare’s automatic drawings “predicted Abstract Expressionism long before the name of Jack [sic] Pollock was heard of in England.” Some of Spare’s techniques, particularly the use of sigils and the creation of an “alphabet of desire” were adopted, adapted and popularized by Peter J. Carroll in the work Liber Null & Psychonaut. Carroll and other writers such as Ray Sherwin are seen as key figures in the emergence of some of Spare’s ideas and techniques as a part of a magical movement loosely referred to as chaos magic.

Zos Kia Cultus is a term coined by Kenneth Grant, with different meanings for different people. One interpretation is that it is a form, style, or school of magic inspired by Spare. It focuses on one’s individual universe and the influence of the magician’s will on it. While the Zos Kia Cultus has very few adherents today, it is widely considered an important influence on the rise of chaos magic.