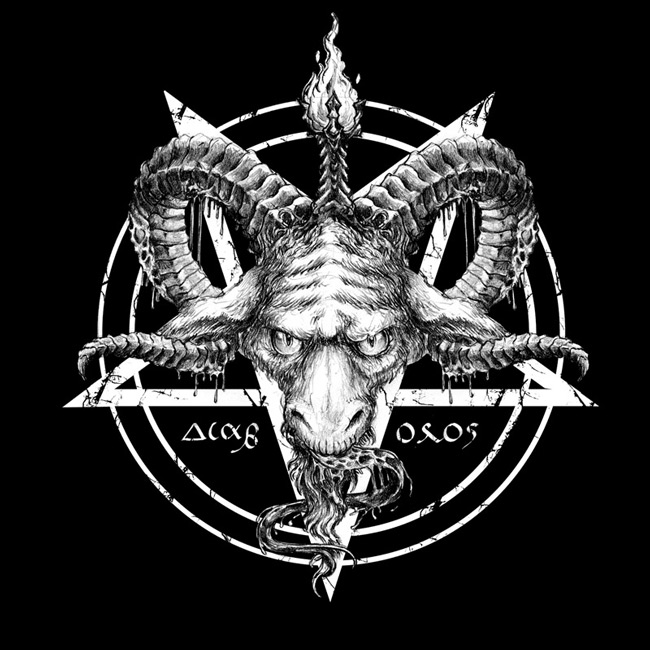 Interview with Salminen A. of Babalon Graphics

Babalon Graphics is focuses on work with occult and religious themes. Having worked for about fifteen years, the client base of Babalon Graphics has slowly increased quiet significantly. Up to this date, bands artwork has been done for dozens of bands and individuals, ranging from album covers to illustrations in occult literature. Babalon Graphics can be described as one man’s helping hand for various visual needs.

Babalon Graphics: I do not see it that way. I think that band-related art, for example cover art, is more like propaganda and a visual way of showing what the music is declaring. Art is a different matter.

HMA: First of all I would like to ask about your technique and composition style.

Babalon Graphics:Well, I always change to the style that fits the current work best. Sometimes the client has an idea of what the style should be. Yet people often say that they recognize a signatory touch in my pictures. Nowadays, I rarely use any other equipment than a pen tablet. Drawings, paintings and photo manipulations they are all done with a pen tablet. Only calligraphy is an exception, as you will need to get the feel of the paper to succeed in calligraphy.

HMA: We see a great deal of medieval and biblical themes, revisited and reinterpreted. Is this the main part of your aesthetics?

Babalon Graphics: I admire artists and engravers like Albrecht Dürer and Gustave Doré. They are true masters of using a line. They understood how lines build forms, as well as the play of light and shadow. Their techniques have influenced my work significantly. The biblical themes in my work arise from the fact that many bands often ask me to reinterpret the Bible from the sinister point of view. Therefore, the Devil is an important figure both in the Bible and in my work.

HMA: What is the creative thought process behind your day-to-day workflow?

Babalon Graphics: When getting briefed by a band or an individual client, I want to hear what they are after. What is the emotion or feeling that they want to convey to the viewer? I try to understand whether the idea they have is similar to the picture that I have in mind. I have also noticed that my thoughts often drift back to work that I’m currently doing, especially problems that I may be facing with a particular piece. This can sometimes be disturbing, but at the same time, it is an important part of the working process.

HMA: In your eclectic portfolio we see a great deal of styles, what would you say is your strongest skill as well as experience?

Babalon Graphics: I believe one of my strongest skills is combining and editing photographs. I find it very interesting how, by skillfully combining photographs, it is possible to form an imaginary but credible scene. Although I draw a lot, I still feel that I’m not excellent at drawing. I enjoy making black and white graphics, but somehow they usually turn out a bit cartoon-like. This is one skill that I want to improve.

HMA: Demons, occultism, mysticism, magick and so on… are reoccurring themes and subjects in Heavy Metal. How do you keep the flame of creativity always burning?

Babalon Graphics: I have to admit that sometimes the flame of creativity does burn out; you can’t really help it. But eventually you always find the creativity and enthusiasm again. Although there are always some slightly dull assignments, the challenging and highly interesting pieces keep me motivated. This is the kind of work that I feel I can improve my skills with. One such piece of work was a book project that I did with Vexior. We shared the same vision on how the illustrations should look and it was enjoyable to work with him. The subject of the book itself, as well as the knowledge that the pictures were based on and the level of detail that was included in each illustration was fascinating.

HMA: If you had to pick 5 pieces of your work, which ones define your style and personality?

HMA: What artist do you remember from your formative years that left an impression on you creatively and personally?

Babalon Graphics: I already mentioned Doré and Dürer, but I would like to add two Finnish artists, Akseli Gallen-Kallela and Hugo Simberg. Gallen-Kallela especially has a special place in my heart. He truly was an excellent artist, with a unique eye for graphics and an understanding for hiding symbolism behind the surface of his work. His paintings have become the visual canon for the mythological history of Finland and I hold them very dear.

HMA: What is your art background?

Babalon Graphics: I have no special background in art.

HMAW: All your work is very professional and done with taste. However, the ones which my eyes have settled on are “Black Altar – Suicidal Salvation” and “Blut Aus Nord – What Once Was”. Can you tell us about how they have developed and what were the bands’ requirements?

Babalon Graphics: With Black Altar, I had quite a loose frame to work within. They wanted it to be related to the theme of suicide. As the name of the album was “Suicidal Salvation”, I proposed that suicide could be portrayed as a portal through which to elevate oneself. The suicide would be a ritualistic one, not done in grief, but for a higher purpose. They liked this idea and that was it. Blut aus Nord was a different case. Philip from Debemur Morti and Vindsval from BaN contacted me and told that they wanted to create a “dark encyclopedia” of black metal. What Once Was represents the harsher side of BaN and on the artistic side, the albums were to resemble an old tome. The albums should differ from each other only a little. Therefore, the frames of the symbols in each of the covers have the same base and only the symbolism of the sigils differ. I believe that we achieved excellent results with the leather-like texture of the paper in the cover and the golden foil-print. There will be at least four more What Once Was -albums to come.

HMA: I do tend to ask this often, but I guess it is unavoidable: what are you working on at the moment?

Babalon Graphics: I have several projects going on, but the few bigger ones worth mentioning are the Hammer of Hate compilation covers and the re-issue covers for Behexen’s Rituale Satanum. With Vexior, we will soon start working on the illustrations for another book.

HMA: Thanks again for this interview and keep in touch with our site.