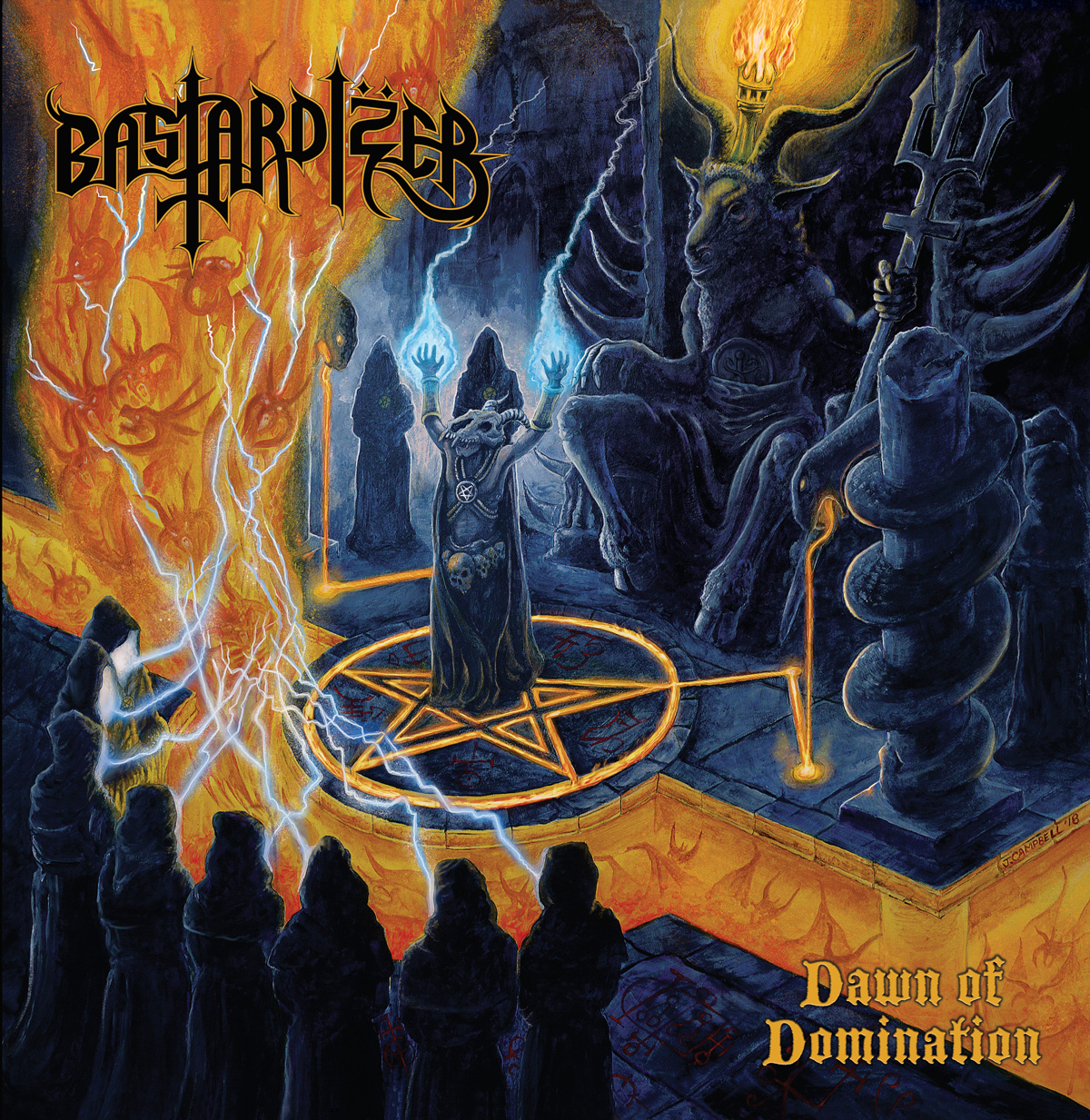 Dawn of Domination By Bill Morgan

Bastardizer was formed in early 2013 in Sydney, Australia with the intention of producing a brand of dirty black thrash n roll that raises fists, induces heads to bang and makes babes go wild. Since then the band has garnered a very strong legion of fans after numerous live onslaughts across Australia, New Zealand, Europe, and Asia, as well as supporting heavy metal heavyweights such as Morbid Angel, Hobbs Angel of Death, Origin, Destroyer 666, Bölzer, Skull Fist, Tribulation, Lich King, Midnight, Toxic Holocaust, and Coroner. Debut LP ‘Enforcers of Evil’ was released through Heavy Forces (Germany) and Hells Vomit (New Zealand) in 2014 followed by split releases ‘Strike of the Bastard’ 2015 and ‘Bring Back the Riff’ 2016. Latest LP ‘Dawn of Domination’ was released in September 2018 through Undercover/Evil Spell Records (Germany). Bastardizer is ready to unleash their Hellish attack upon the rest of the world.

Our new material is harder, faster, heavier, and stronger than the material we’ve released in the past. It’s been a natural progression as we become better songwriters, and we’re stoked with how ‘Dawn of Domination’ came out. It’s got a real raw and unrelenting energy from beginning to end. I’d say people who liked our early stuff will love the new material.

When it comes to creating new music, we don’t want to put limits on what we can or can’t do. The principles of this band have not changed since we began; to play loud, hard, rock n roll. We’ve evolved with some elements of extreme metal in our tunes over the years and if you heard the music we were writing when we started the band in early 2013 to what we’re doing now in 2019 it’s vastly different. However, the spirit remains the same.

The record touches on a variety of subjects, but there is an underlying theme of ‘Hell on Earth’ throughout. Whether that’s through actual-world issues like conflicts on ‘Crimson Trenches’ or the public’s thirst for blood ‘A Dose of Vengeance’, or the idiocy of religion ‘Death Cult’. We romanticise some evil notions as well in ‘Hellions of the Oath’ for example. ‘Whiskey ‘til Death’ is an overt tribute to Lemmy. We touch on a few different things but just a pissed-off attitude is prevalent throughout. But hey, we’re having a good time playing these tracks and we hope the listener does too.

If metal still dangerous? Yes and no. I mean tours are getting cancelled left, right, and centre because people are offended by everything. There is a big change in the scene in general. Destroyer 666 can’t even play their home country. I personally am not a fan of censorship, but on the same token, it may stir on some musicians to write more edgy stuff. I can separate the artist from the music. The average punter on the street is still horrified by extreme metal and that’s a good thing. There will always be an element of danger in this music but the more snowflakes who are drawn to the genre, the less of a good time we can have, I think.

Metal is absolutely is iconoclastic. To the point where it’s almost expected to be. Obviously, people have attacked religion, politics, and icons since the beginning of time; and that sort of ideology found a home in heavy metal when the genre was born. I’d assume people of that way of thinking are just drawn to the genre. It’s one of the reasons I was when I started listening to metal that’s for sure. That being said, people who have no interest in that sort of thing are a part of the scene as well and should be welcomed. Metal is a great tool to verbalised a view that the way things have been done (and still are) is not necessarily the way it should be.