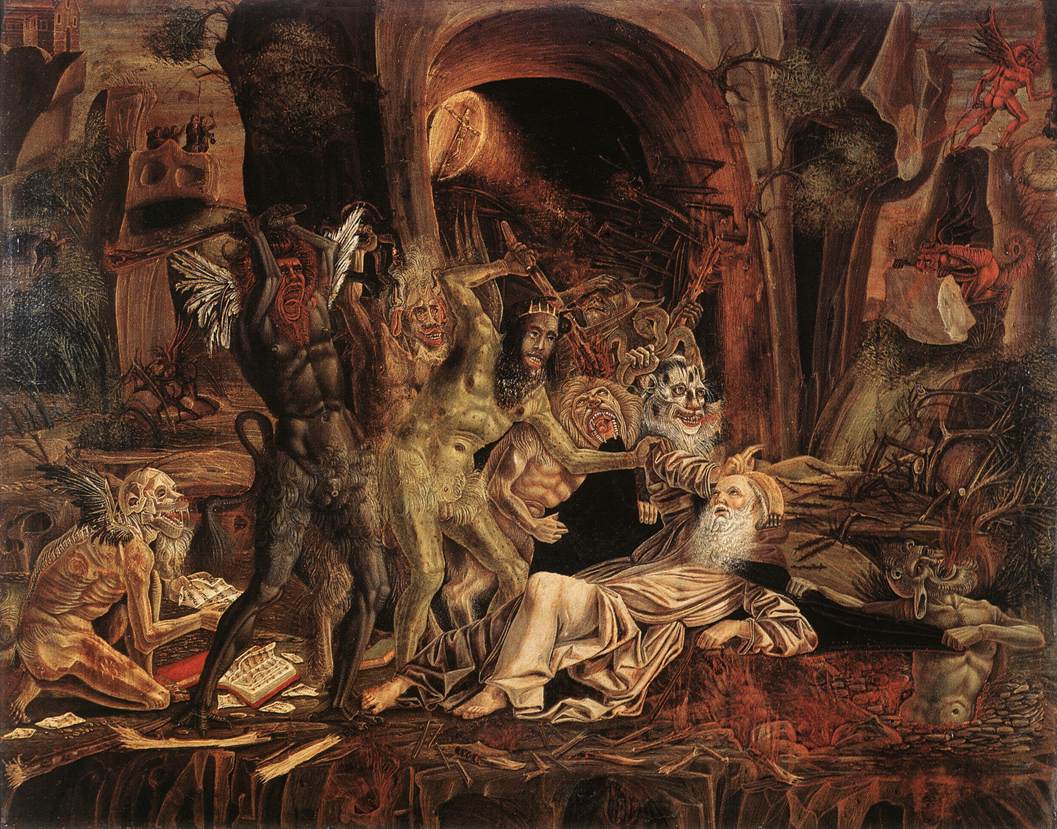 The style of this painter of Istrian origin is highly unusual. Active in Mantua and Padua (though he cannot be identified with the monk and prophet of the same name [1437-1531], as was once thought), his work reveals the influence of Mantegna together with some elements drawn from Ferrarese painting. It is characterized by a care for detail, perhaps exaggerated, and by miniaturistic tendencies in a Northern European manner that find expression in a crystalline and metallic linearity. The angular, skeletal landscape, bathed in a leaden light and ruthlessly cleared so that it looks devastated, creates a sense of anguish in its snapshot-like fixity, as if the events were taking place in a human terrarium from which all the air has been evacuated.

There are three panels in the Galleria Doria Pamphilj illustrating the life of St Anthony Abbot (251-356), the founder of monasticism, as recounted in the fourth century in St Athanasius’s popular book. The first (not shown here) illustrates how Anthony, after the death of his parents and at the age of between eighteen and twenty, “sold… all the other goods and chattels he possessed and distributed the large sum of money he obtained to the poor.” The second panel (not shown here) is devoted to the temptations of the saint. Finally, in the third piece of the predella (shown in the reproduction), the great and terrible power of Evil is revealed with the worst characteristics of the human race, in all its innate repulsiveness and horrifying folly. Exorcisers appear on the rock, in the form of skulls, and Satan is transformed into malign shapes and ferocious beasts, however, a ray of light descends toward Anthony and a voice declares: “I was here, Anthony, but I wished to see your struggle, and since you have withstood and have not been defeated, I shall always succour you”. This is the moral of the cycle. We do not know whether it is complete or whether other elements are missing, such as the leave-taking of his sister, the erotic visions, or the meeting with Paul.

The Temptations of Saint Anthony, a theme that has fascinated artists from Bosch to Grünewald, Schongauer, and Flaubert, is cited as the work of Mantegna in the fideicommissary list of 1819, while it was recorded, along with the other two parts, in an inventory of the palace in Piazza Navona drawn up on the death of Camillo Pamphilj in 1666.

Because of their style the three pictures by Parenzano can be dated to the same period as the Paduan frescoes in Santa Giustinia, painted around 1494 (the painter lived in the monastery, 1492-96). It is interesting to think that these Temptations set amidst arid ground, surrounded by chimeras and monsters, may have been painted in the same year as the discovery of the “New World.”