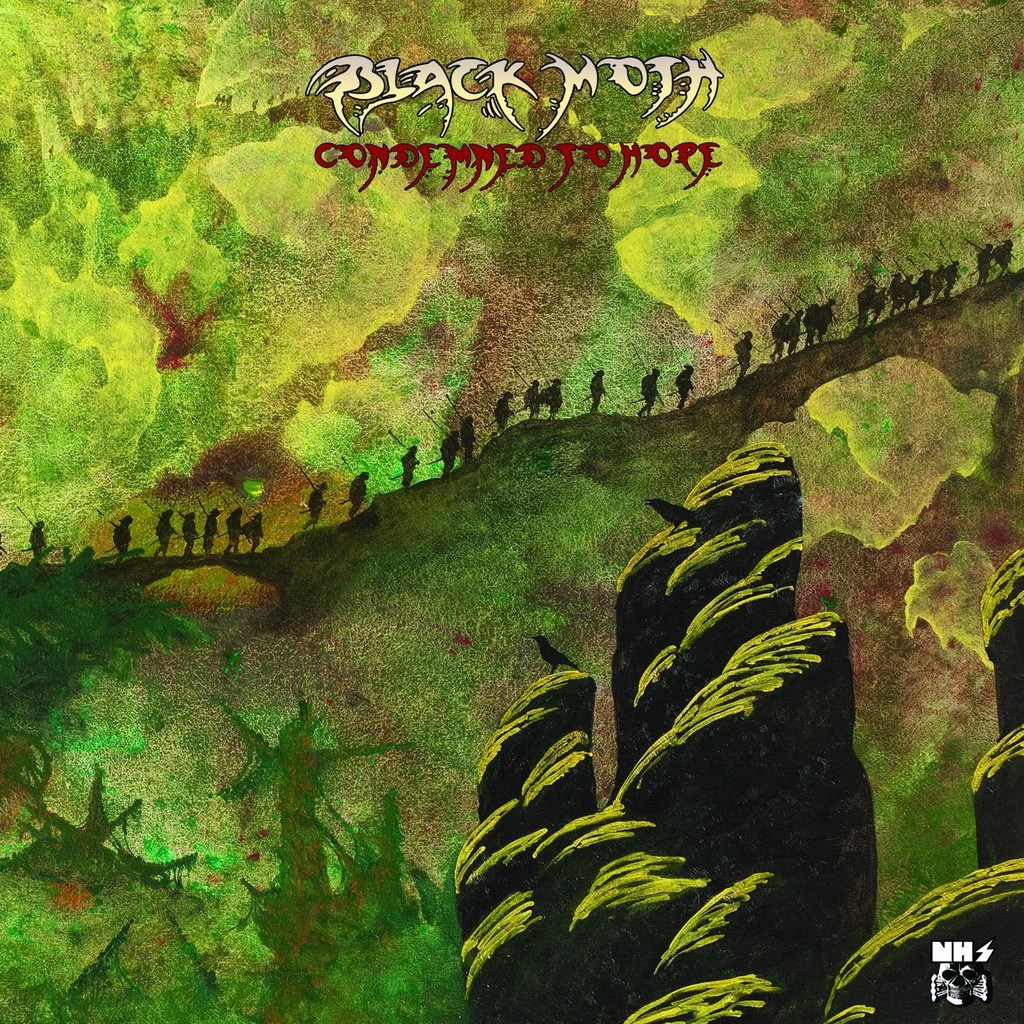 Black Moth is a frantic musical force from Leeds, the UK formed in 2010. Filth, dirt and doom descend from its onyx wings. The recent arrival “Condemned to Hope” was produced by Jim Sclavunos (Nick Cave & the Bad Seeds, Grinderman, The Cramps) takes their kaleidoscopic heaviosity and sepulchral style to a whole new plateau of riff-driven dementia.

HMA: If my sources are correct, Black Moth arose out of the ashes of a former garage rock band named The Bacchae. Can you tell me about the evolution of the Moth?

Black Moth – Dom McCready: Your sources are indeed correct. Yeah some of us played together in that band. We found though that we were writing heavier and darker material. It came to a point where we realised that this was a completely different band and thus the Moth was born.

HMA: You are likened to another band beginning with Black; none other than the mighty Sabbath. Would you cite them as a crucial inspiration? What other bands have inspired your music?

Black Moth – DM: Of course we all love Sabbath, I mean who doesn’t!? Are they crucial? Probably. You are influenced by everything you listen to. I wouldn’t say that any particular band is more important than another. It’s more about the sum of your musical tastes put together. We have a very wide range of tastes in our band from The Stooges, The Cramps, Bob Dylan, Link Wray to stuff like Behemoth, Mastodon, Wolves in the Throne Room. It’s all in there somewhere.

HMA: On your official website you describe your sound, succinctly, as doom/rock. Meanwhile, music reviewers have described you as ‘doom’, ‘sludge’, ‘grungey’ and a mixture of ‘stone rock and garage metal’. How do you feel about being so hard to define?

Black Moth – DM: We feel great about it. We’re not really interested in genres or sticking to the expectations of them. We write whatever music we feel like and don’t feel the need to filter stuff that is a bit different. This gives us a lot of freedom creatively and allows us to have a broad audience. For us it is up to everyone to interpret art how they see fit and to come up with their own conclusions about it.

HMA: Tell me a little about your songwriting, rehearsal and recording process for the new album “Condemned to Hope”.

Black Moth – DM: Writing Condemned to Hope was a lot different to writing ‘The Killing Jar’. This time it was written in a relatively short period of time. Often disappearing into the rehearsal studio for days on end. It was intense I guess you could say. The recording process was hectic and fun. We didn’t have too long in the studio so the pressure was on to get things right.

HMA: What was it like working with Jim Sclavunos?

Black Moth – DM: It was great; we had worked with Jim before on our previous album so we already had a good working relationship with him. He cracks the whip and definitely doesn’t have time for bullshit. Sometimes this is what you need when making an album!

HMA: Tell me how it feels to behave appeared on Jeffrey Lee Pierce Sessions album ‘Axels and Sockets’ with the likes of Nick Cave and Iggy Pop?

Black Moth – DM: Yeah it was kind of surreal in a way. Appearing next to those legendary artists is definitely a thrill and very humbling. We are the third track on the album as well which is mind-blowing. We’re very proud to have been involved in the project.

HMA: You have been on two tours of Europe and an impressive tour of the UK – what do you love about touring and what do you hate, if anything?

Black Moth – DM: We have actually toured Europe four times now! I love most things about it, especially in Europe. I love to travel and meet new people, it’s nice to also see the kind of global sense of unity you find within the rock/metal scene. It’s a great feeling to travel a long way to play in a country you’ve never been to before and have people show up to watch you. At the end of the day who wouldn’t rather be on the road than sat in the office right? What do I hate? Not much, I guess it can be very tiring. In the UK you don’t always get treated very well which can be a little demoralising. But overall touring is life, I was born to be on the road!

HMA: What do you think the future holds for Black Moth?

Black Moth – DM: We are hard at work writing are 3rd album at the moment so stay tuned on that front. Also, we have a European tour coming up with Sisters of Mercy which starts on 12th October.

HMA: Thank you very much for the interview!