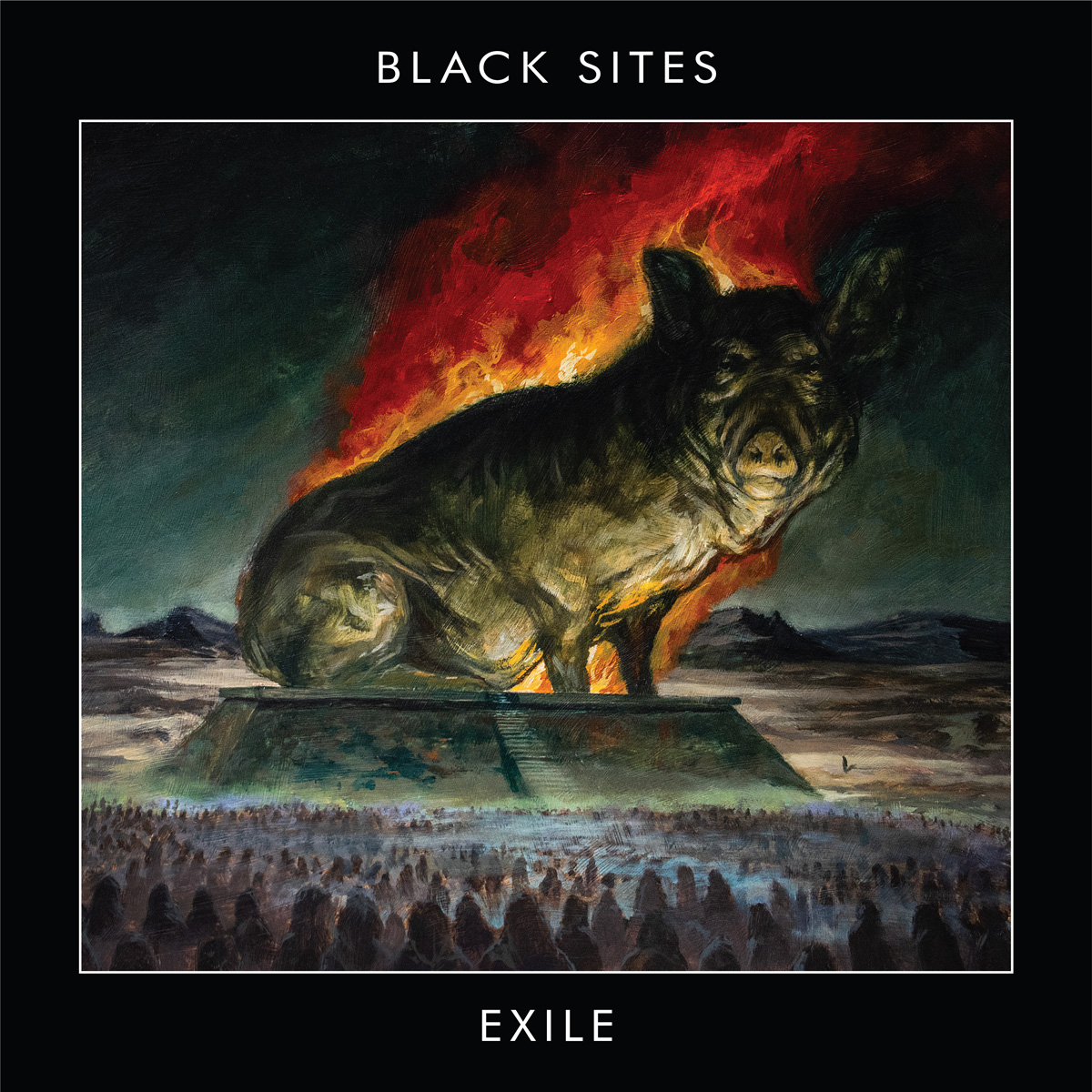 Exile also presents Black Sites’ new rhythm section.  The original lineup parted ways amicably due to logistical issues, which led to the addition of Naples and Salazar.  “Garry and I were already playing together in another project, and I thought his approach and work ethic would work well in this band,” says Sugar. “Then we randomly met José in the parking lot of our practice space, and within five minutes we were joking about St. Anger and quoting lines from Boogie Nights. We knew he’d fit in nicely.”

Exile features artwork by Adam Burke (Vektor, Eternal Champion)and was mixed by Sanford Parker, who is known for his work with underground luminaries Voivod and Eyehategod.  Hoove Child Records will release Exile on CD, with digital and vinyl formats available directly through the band. The album’s driving riffage, elegant harmonies, and thoughtful lyrics are sure to launch Black Sites far beyond their Chicago home.

I’ve described the new material as a happy medium between “prog” and “old-school metal.” Our last album was headed in that direction, but I think this one is much more focused and refined. We also have two new members in the band, who played a huge part in why it sounds the way it does.

The artwork for “Exile” is an actual painting (I think it’s acrylic), executed by Adam Burke, whose email address happens to be. It’s kind of a pseudo-biblical scene, but any “story” being told is deliberately left open to interpretation. I think it fits the general theme of the album, and especially the name “Exile.” For the last several years, I’ve felt like the world has been on a journey into extreme negativity and ignorance, and I want no part of it, hence the title. I have some background in art and design, so I provided Adam with an explanation of the cover concept and a very rough sketch. My only other suggestion was to reference Blue Oyster Cult’s “Fire Of Unknown Origin” as far as colours and shading. Adam was able to work with that info and turn it into a really eye-catching piece of art with a lot of depth to it.

I don’t know that we have any principles, musical or otherwise. As the guy who writes most of our material, my main criteria is that it feels “real” to me. You’ll notice our back catalogue has no songs about dragons or Vikings, and that’s why. My other goal is that as an allegedly “progressive” band, I want us to actually progress. Every song should feel like something that we haven’t already done, and ideally, it should push our boundaries compositionally or mentally. The songs are all about different things, there is no unifying concept. However, I think they’re written from the same general attitude and outlook, so that might count for something.

Metal can certainly be dangerous, although I see a lot of bands playing it safe lately. The real question is, “dangerous to who”? I think that is in its nature, for sure. Even at the very start, you had Black Sabbath, who were tearing down the military/industrial complex and organized religion. That attitude is a huge part of why I got into this music. Metal bands that align themselves with the powers that be have completely missed the point, as far as I’m concerned.