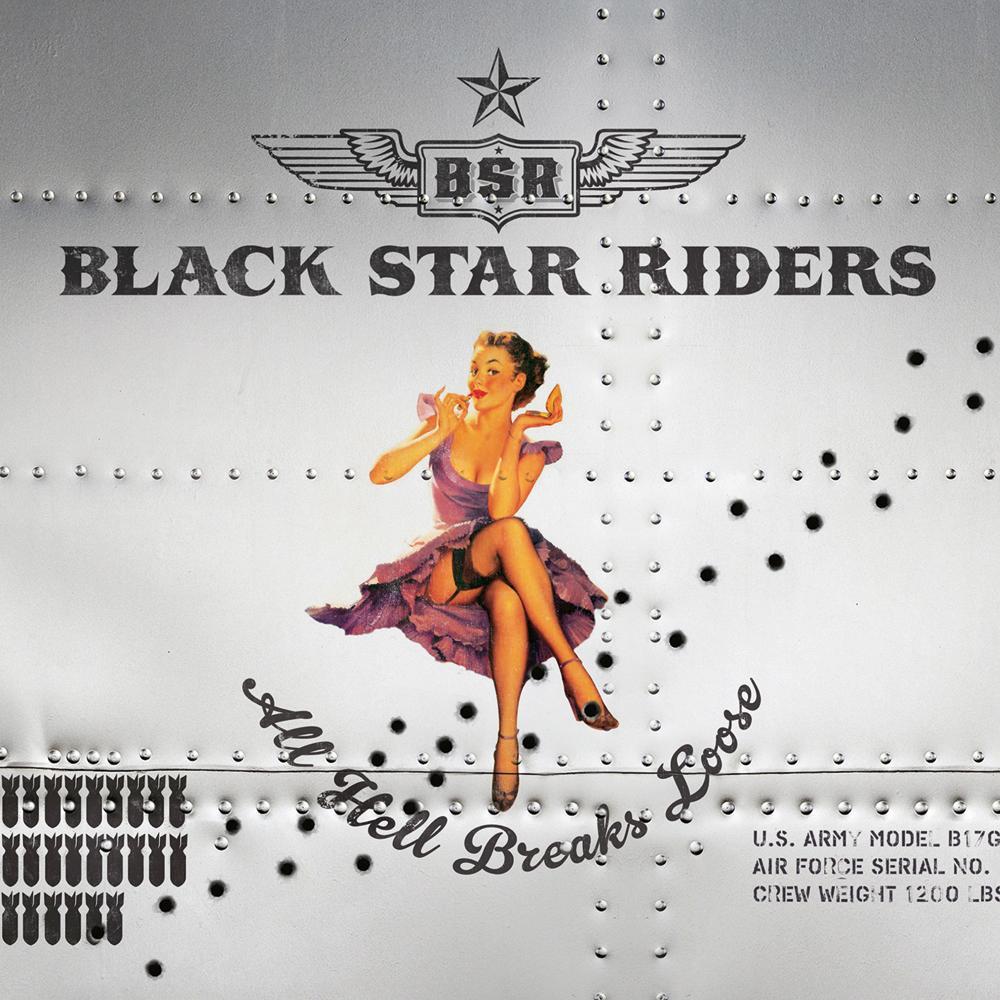 As I sit in the dressing room waiting for my interview with Black Star Riders drummer, Jimmy DeGrasso to begin, I’m confronted by an interesting question. Can you ever step out from the shadow of your own success? For those of you who might not know, Black Star Riders is a band formed by former members of the legendary outfit known as Thin Lizzy. In fact, Black Star Riders have been spoken of as a new incarnation of Thin Lizzy. Still, others hesitate to compare them to Thin Lizzy. Regardless, while listening to their latest album, The Killer Instinct (2015), I was left with the distinct impression that there was a fresh new sound there.

Outside the venue, I had seen fans waiting in line with Thin Lizzy shirts on and I couldn’t stop wondering about how that made the current members of Black Star Riders feel. Proud or maybe anxious, or maybe a little bit of both? It’s at that moment that Jimmy walks in. He’s dressed in simple jeans and a t-shirt, with the bearing of a friend’s friend you might get introduced to at a party. He pours himself a glass of whiskey, crosses one leg over the other and we begin. He never stops smiling.

Andy (HMA): Thanks for your time today, Jimmy. How do you feel? What’s it like touring with Europe?

Andy (HMA): Nice. Prague is a good place to kick off. Fun town.

Andy (HMA): I won’t ask about the band changing its name, mostly because you’ve spoken about it before.

Andy (HMA): I’m just curious about the significance of the new name. If I’m not mistaken, it comes from the classic Western ‘Tombstone’? Tell me about that.

Jimmy DeGrasso: You know it’s something from the movie…. Ricky was telling me about it…. I think it’s the one gang with the red sashes. I think that’s what he was telling me that they were called. That’s where he got the name from. I think it was a name that just stuck with him as he was watching the movie. When we were looking out for band names it popped up and we were all like “Oh, actually that’s not bad.” As you can imagine it’s not easy to rename a band.

Andy (HMA): Especially not in your case.

Andy (HMA): ‘The Killer Instinct’ is your second album as BSR. Do you feel that is a stronger record to ‘All Hell Breaks Loose’?

Jimmy DeGrasso: It’s a difficult question to answer. I wouldn’t necessarily say it’s stronger…. I like it better. This record is a natural progression in creativity. The first record was essentially written to be a Thin Lizzy record. So I think what happened is when the band started writing there were certain parameters that guided them because they knew that ‘All Hell Breaks Loose’ would be a Thin Lizzy record. With this record, there was none of that. It was the four of us….because Robbie wasn’t quite in the mix yet…. So it was the four of us and there was nothing holding us back or hovering over us. It was completely different because there were no parameters that we felt we had to stick to. ‘The Killer Instinct’ was written as we are, as Black Star Riders. I’d say it was a lot freer and in a way possibly our first album.

Andy (HMA): Are you happy with the way it’s been received?

Jimmy DeGrasso: Yeah and part of the reason for that is that right now we’re really in a creative hot spot. We’re even talking about doing another record already this year. Not putting it out but just recording it and putting it to the side for next year or maybe the year after. So yeah, I’m happy with the way it’s been received and I hate to say it but…. Yeah in a way it’s a better record. I think it’s great. It’s got great hooks, it’s a real guitar heavy album and I love the way it turned out.

Andy (HMA): What did producer Nick Raskulinecz bring to the table?

Jimmy DeGrasso: Nick did a magnificent job in steering us in the right direction. He’s really like the fifth Beatle where it’s like, Nick will come in, we’ll be playing things, and Nick will hear something completely different than what we’re thinking. He’ll be like “How about you switch this?” or “Try that and put a beat there”. Then you’re like…. Wow! Never thought of that but it works. That’s why he’s the in-demand producer that he is.

Andy (HMA): Indeed he is. He’s been known to get great performances out of musicians as well.

Jimmy DeGrasso: Absolutely. He’s got a great ear for songs and he’s got a great feel for production. He’s an all-around musician and producer. He’s also fun as shit to hang around with.

Andy (HMA): Robbie Crane’s work on the album sounds great. Was it an easy transition?

Jimmy DeGrasso: When we had to replace Marco there were bass players calling us who weren’t right. I went down a list of people I knew but no one was quite what I was looking for from a playing standpoint. I knew there was someone I knew who was right but I couldn’t put my finger on it. We were on tour in America and I woke up one night and just went “Robbie Crane!” I woke up our sound man, Tim, and I said “Robbie Crane!” and he just looked at me and said, “That’s the guy.” Robbie and I had done some gigs in the past, we had worked together well and he just understood what it was we were looking for from a playing style. We were looking for something old school, basically going back to the 70s. We wanted an SVT and a P-Bass and a guy who plays with a pick. We wanted a very rock bass player. Not jazz, not fusion….rock bass playing because we knew that was what would fill out the band’s sound. It didn’t take more than ten seconds of Robbie playing for us to know that he was our guy. So yeah, it was an easy transition in some ways but at the same time, they’re never simple.

Andy (HMA): Tell me about the concept of the album. The album cover art seems to be a nod towards WWII and the military art of that period.

Jimmy DeGrasso: We all like the artwork from the World War II era. Everything from the 40’s really. The stuff they used to paint on the planes and on tanks and stuff like that. I think that’s all so great. Stuff that was just painted on a whim and in a moment but turned into really historic artwork. Following from the cover of the first album we just wanted to continue with that motif. The first one was so cool that we just wanted to do another take on the same style. I don’t know if we’re gonna do that with the third but we all just sort of appreciating that military artwork from that period. It’s just really interesting.

Andy (HMA): How do Scott and Damon develop their roles within the dual guitar sound of the band?

Jimmy DeGrasso: I’ve always said that if you have to talk about music too much then you’ve already fucked it up. [Laughs] You play, right? You know what I mean. Someone will start on a lick, the other guy will come in with a solo and they’ll just decide on the spot who takes it. It’s always just a natural “Hey, why don’t you play this?” or “You take that” thing.

Andy (HMA): I can relate. There’s not a lot of formalized thought that goes into it. In a way, rock’n’roll should be more about feeling.

Jimmy DeGrasso: Yeah, totally, I agree. It’s just all natural with us, not a lot of thought goes into things. Damon will take one, Scott will take one, and sometimes they’ll trade. Those guys are just so accomplished that there’s really no need.

Andy (HMA): Do you ever find that you compare the music now with what you did with Thin Lizzy. Do you live in the shadow of that name?

Jimmy DeGrasso: Y’know, we were just talking about this with the guys the other day so funny you should bring it up. I think on the first tour people were coming to the shows to hear Thin Lizzy songs with some new Black Star Riders songs thrown in. I think in the last year and half that has definitely evolved where people are now coming because they want to hear mainly Black Star Riders songs and maybe a few Thin Lizzy songs. Now with the second record, even more so! I wanna keep playing Thin Lizzy songs because of the lineage and Scott, and where it all comes from but people would like to hear new stuff. It’s natural. People are showing up and I think they wouldn’t if they didn’t think that the new stuff was good. They wouldn’t buy the albums. So Thin Lizzy is not a bad thing that is hanging over our shoulder, it’s kind of a cool thing.

Andy (HMA): What is the most important thing you’ve learned throughout your career?

Andy (HMA): Worlds about to end in five minutes. You’re stuck in this room. What would be the last thing you’d do?

Andy (HMA): The guys from the band and let’s throw me in the mix just to spice things up.

Jimmy DeGrasso: We’re all gonna have a big toast, a big hug and we’ll all tell some stories before we go.

Andy (HMA): That’s all I have, Jimmy. So the world ends. Thank you.

Jimmy DeGrasso: Thank you too!