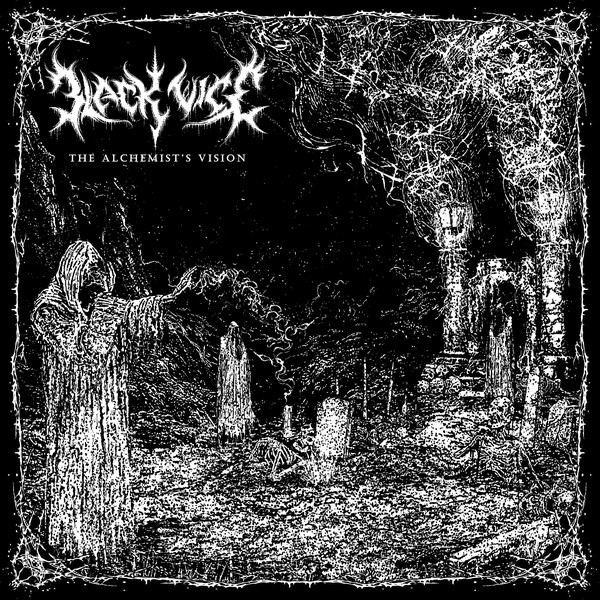 The Alchemist’s Vision by Shane Davis

Black Vice began in 2013 when Ravnblod and Vultuur were looking to start a black metal band. Our guitar player at the time brought Theia Mania into the fold on bass, solidifying the first lineup, which was fairly primitive in all aspects. Over the past seven years, there have been various sound, visual approach, and personnel, with ‘The Alchemist’s Vision’ being the latest incarnation put to record.

We come from various musical backgrounds, from hardcore, grindcore, death metal, and heavy metal scenes. We had recently finished our split with Haunter, our first release with Theia Mania transitioning from bass to guitar and writing. Still adjusting to this role, the songs were not immediate. The first track, Onteogenesis, went through several iterations before completion. When we added our second guitarist PHIL, and Theia Mania began exploring more melodic riffs. This, in addition to PHIL’s complimentary guitar parts, allowed the remaining songs to flow more easily.

It’s safe to say that we all have an interest in the esoteric, particularly practices that are shamanistic.

I suppose it depends on how you define secular. If it’s to have an objective stance towards religion, metal may be among the least secular of genres. I think it’s fair to argue that dissent is present within metal’s DNA, with black metal being the most extreme manifestation.