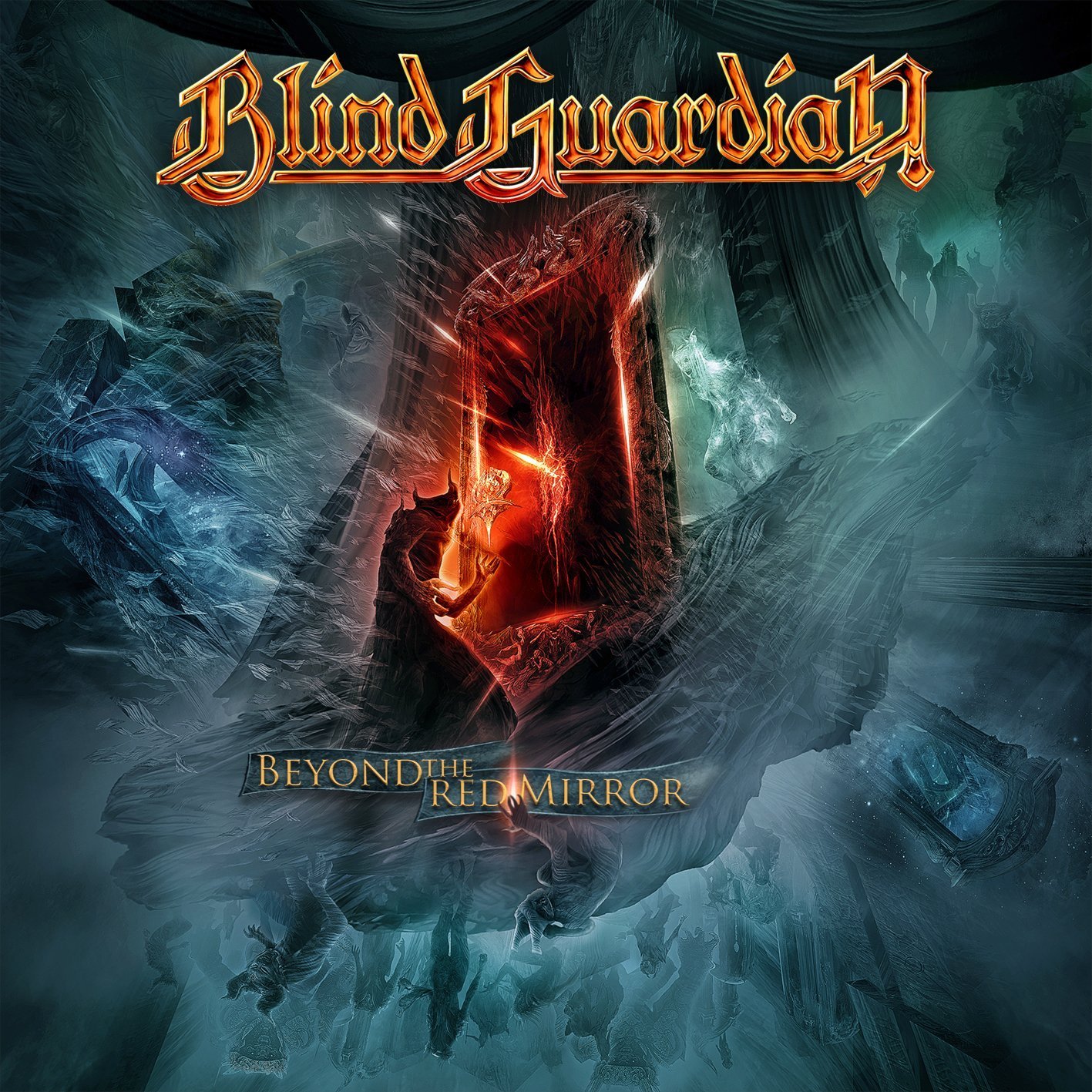 At the edge of the imagination

With a musical career that started nearly 30 years ago, Blind Guardian is a cult to an incredible number of faithful fans. The year 2015 saw the release of their tenth studio album ‘Beyond the Red Mirror’ which delivers a flawless fusion of orchestral elements into heavy metal. A very interesting factor about the new album is that it continues the story which started twenty years ago in ‘Imaginations from the other side’. When it comes to lyrics and storytelling you can always trust Blind Guardian to deliver. Hansi Kursch lets his imagination run free inspired by legends and epic tales of magic and wonders and by the worlds of J.R.R. Tolkien and George R.R. Martin. We met with the band on their latest tour at the London Forum in April to discuss art, magic, fantasy and Game of Thrones.

HMA: Your new album “Beyond the Red Mirror” just came out, can you tell me a bit about it?

Blind Guardian: It’s awesome!  It was released in late January, it’s a concept album, it finished a story that we started telling actually 20 years ago in the ”Imaginations From The Other Side” album and Hansi at some point realized that he never finished that story that he started back then and he used the opportunity to finish it now. We tried a lot of new things on the album, worked with 2 big orchestras actually, with 3 different choirs. We used 7 strings down tuned guitars for the first time, changed the sound a little bit and experimented a lot because we like to keep things fresh and interesting, not just for us but also for the fans. Always trying to take the next step and not repeat ourselves. I think we succeeded.

HMA: How does it work with the orchestra when you do live concerts, are you ever able to take them with you?

Blind Guardian: No, we would like to but we can’t take an orchestra and we’re talking about an orchestra that has 90 persons playing and stuff. We would need quite some extra trucks and liners and stuff. We, unfortunately, can’t do this, so all the orchestration that you will hear tonight will either be played by keyboard or will come of tape recording because it’s the choir and stuff, the classical choir, that’s all coming from tape.

HMA: You said this is a concept album, what story does it tell?

Blind Guardian: The story as I said started on the ‘Imaginations’ album, was a story about a little kid living isolated in one world which is kind of similar to ours and he had the opportunity to step through to a kind of portal to get to a different world where he could be a hero and save endless war and stuff like that. At the end of the story we are at that moment where the kid is in front of the gate but never found out if he takes that step and fulfill his destiny. Now on the new album we’re 20 years later and we find out that the kid was too afraid to take the step and he realized about his fate and destiny and starts on a journey to look for that final gate which is the red mirror to finally step into the other world and maybe end things there.

HMA: That’s fantastic, so the story still continues in the next album.

Blind Guardian: Exactly, because again you don’t find out what happens in the end.

HMA: Because the two records “Beyond the Red Mirror” and “Imaginations from the Other Side” are connected, is there a connection with the album artwork as well?

Blind Guardian: It’s a different artist, also on ‘Imaginations From The Other Side’ we had this framework that you take a look into this other world and now with this album you see this newer framework which is the portal, there is a kind of connection but it was not really intended to be something similar.

HMA: Are you generally involved with the album artworks?

Blind Guardian: We have a guy that we are working with and we tell him what we would like to have and he’s extremely fast, he sends us sketches that we check out and we normally tell him, “Yeah, that’s a great idea but can you change this in whatever way or can you go in this direction.” We talk, send stuff back and forth and that’s how the stuff slowly grows.

HMA: What is the inspiration behind your lyrics? What kind of stories and legends do you take inspiration from?

Blind Guardian: Hansi is writing all our lyrics, but normally he is inspired by books that we’re reading, obviously there has been Tolkien, King, stuff like that but also general mythology, King Arthur always played a big role for Hansi. He draws inspiration from all kinds of things.

HMA: Is it a passion that started when you are a kid?

Blind Guardian: Yeah, when we started reading. I’ve been into fantasy and horror literature all my life basically, those were the books that we read, Micheal Morcog, Stephen King, Tolkien and stuff and it never changed.

HMA: Do you believe in magic?

Blind Guardian: I think, I believe in the magic of music. I don’t really believe in wizards or demons or any of this, but I think music can create a lot of magic. My guitar is my wand.

HMA: What is the origin actually of the name Blind Guardian; does it come from a legend or story?

Blind Guardian: Before we recorded our debut album we had a different name, we were called Lucifer’s Heritage. Everybody thought we would do black metal and we wanted to get this straight, so we were looking for another name and we had the song Guardian of the Blind back then. Actually we changed the name while recording the debut album and we were at some point sitting in the studio, everybody with a huge piece of paper, different name suggestions and we just put them on the table and I think Hansi came up with Blind Guardian based on this Guardian of the Blind and we just liked the way it sounded and it kind of fit. I think it was the right decision because we’re still here. Never change the name anymore.

HMA: Is there a connection between the song “At the Edge of Time” that is in your new album and the homonymous album?

HMA: The main reason I ask is that in that album you sing the song “Frutto del Buio” in Italian; I am Italian and I am curious to know why you choose to sing it in Italian?

Blind Guardian: I have to admit I don’t remember exactly. I think somebody mentioned that it would be a nice idea and we thought we would give it a try. Some languages worked, some didn’t. There were people, for example, asking for a German version and we didn’t really like that idea. German works for Rammstein and some few other bands but I don’t think it would work for us. We tried Japanese; you know there are some languages which are much trickier than others. Especially of what we had to rely on, we had the original lyrics of course and somebody had to translate them for us into all the different languages because Hansi doesn’t speak all those languages. I think singing something that you are not understanding entirely is tricky, obviously he knew it was the lyrics that he wrote in English but he doesn’t really understand if he sings it in Spanish or Italian or whatever, I think it might be a weird feeling for a singer to do something that you don’t really understand.

HMA: Are you a fan of movies or TV series adaptation to fantasy classics such as “Lord of the rings” or “Game of thrones” (“A song of fire and ice”)?

Blind Guardian: I like the Lord of the Rings movies even though in my humble opinion it also has some flaws. For example, I don’t get why as soon as there are elves in the picture, everybody has to talk in slow motion and whisper. I find that a bit annoying, but Game of Thrones I absolutely love the books, that’s among my very favourite books, but the TV show I have a kind of love/hate relationship, as a TV show, in general, I think it’s brilliant. The actors are awesome, the settings look great, everything is good, but if you compare them to the books they changed a lot and I don’t see the reason why they changed some things. Some characters are just wrong in the show and that’s annoying, but I still keep watching it. I keep bashing it afterwards but I still watch it for whatever reason.

Blind Guardian: Okay, the show is cancelled, sorry! Have to watch TV.

HMA: One more question, what’s next for Blind Guardian? What are your touring plans, how long are you on the road for?

Blind Guardian: We’ll be on the road until the middle, end of next year. That’s quite a lot ahead of us. We’ll be in Europe for the next 2 and a half months or something like that, then we have a break of 4 days I think. Then we’ll go to Australia and Japan, in summer there is a bit longer break but as I said, we have to finish some recordings in that summer break. We’ll continue in South America in I think late September, early October, I’m not sure now. We’ll be on the road until shortly before Christmas actually. Then we’ll be at home for Christmas and New Year’s Eve and continue next year. Next year will all be festival stuff because we always separate. This year is just headlining shows, festivals will be next year. Lots of touring ahead of us…

HMA: No rest and no “Game of Thrones” for you until Christmas then.

Blind Guardian: You know, I have my laptop with me I can also watch stuff while lying in bed in the bus. I just started watching Daredevil on Netflix, just like one hour ago. Sitting here watching the first episode, it looks very good.

HMA: Netflix is all kind of awesome.

Blind Guardian: Yes, it really is, it works very well.

HMA: We have no more time left, thank you so much for your time

Blind Guardian: You’re welcome, see you at the show.