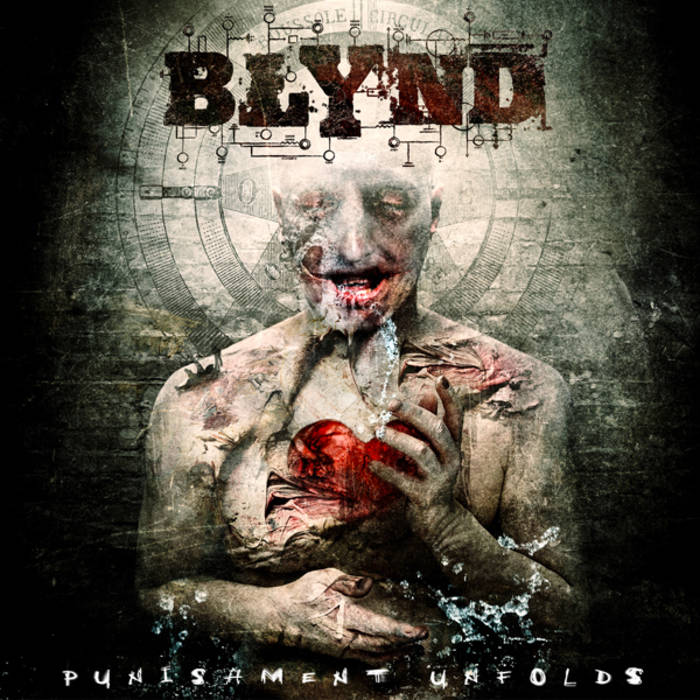 Bringing the noise from the island of Cyprus, BLYND is one of the island’s most established bands, playing a powerful melodic death/groove thrash mixture. With 2 EPs and a full length album reeling in rave reviews, as well as a myriad of live shows under their belt, the band has upped their game with their ready to be released new album, PUNISHMENT UNFOLDS. Featuring guest appearances from artists such as Sakis Tolis from metal legends Rotting Christ, artwork from Seth Siro Anton (Septic Flesh), a massive sound and epic compositions, this album is certain to catapult these Cypriot moshers onto the international metal map. BLYND have played stages in many European countries and shared the floor as a main support to incredible bands such as Children of Bodom, Sabaton, Sepultura, Rotting Christ and Septic Flesh, toured with Sodom on the Legions Tour Fest 2011 and appeared in the UK’s Bloodstock Festival 2012, earning new fans with each and every performance. Now set to tour Europe as part of the “Creatures from the Black Abyss Tour 2012” featuring Cradle of Filth, Rotting Christ and God Seed, the band is proud, honoured and revved up to bring their game to venues around Europe in November/December 2012!

HMA: Thanks for joining Heavy Music Artwork for this interview. Great new album and a massive tour with Cradle of Filth… is this a life changing experience for Blynd?

Blynd: Thank you for having us and for the kind words. We are very excited about this album, we have put a lot of work into it and we are so proud of the final product – we can’t wait to go out there and present it to the world. As for the Creatures from the Black Abyss 2012 tour, it’s definitely another step up for the band. We have played large shows before, but this time we are entering unchartered territory. It’s a great tour package with Cradle of Filth, Rotting Christ and God Seed, and a perfect chance to showcase our new material throughout Europe.

HMA: How healthy is the Metal scene in Cyprus, apart from Blynd any other great name to add in the pantheon of Metal Gods?

Blynd: Well, it’s more likely the actual Metal Gods can have their holiday in the sun in Cyprus! The scene here is small but has been improving steadily. We’re visited by bands that just a few years ago we wouldn’t even dream of having over. More importantly though, more local bands are coming out with great music, which is always great. With the risk of omission, I suggest checking out Winter’s Verge, Arrayan Path, Sonik Death Monkey, Morte Sistema, Vomitile, Rust, Absolute Z, Lethal Saint, Armageddon Rev.16:16 – there’s something to suit everyone’s tastes.

HMA: “Seth Siro Anton” did the cover art; what kind of direction was taken in producing this incredible piece?

Blynd: Seth is an extremely talented artist and it was an honour to have worked with him, because we have been fans of both his artwork and of his band for quite some time. Though we had some minimal input during the process, we left it entirely up to him to come up with the concept. We just sent him the demos and lyrics of three songs, and he came up with an exceptional output to grace the album, worthy of his name.

HMA: What messages or subjects are explored within the music and lyrical theme?

Blynd: Though not immediately obvious, this is a quasi-concept album. The 10 tracks deal with society’s steady path to self-destruction, which manifests itself in different allegorical forms, as well as the resistance of the few to the impending doom.

HMA: So far what was the response from the media and the critics?

Blynd: The album is set for release on the 20th of November, so we have to wait a bit longer for the bulk of responses. We have however sent out promos to different sites, zines and radio stations, and so far everyone is talking about a gem waiting to be discovered – fingers crossed!

HMA: Graphic artists that you would recommend to our readers?

Blynd: It seems your readers know much more about graphic artists than we do! You have some really wonderful work showcased on your site, which is not something you see very often on your typical metal site.

HMA: You have played with some great artists.. Children of Bodom, Rotting Christ, Sepultura, Septic Flesh, Sodom… is Blynd planning for world domination?

Blynd: Wishful thinking! It’s not easy to be picked out of the vast ocean of great underground bands playing these days, but then again we don’t plan on slowing down. It might be a cliché, but sacrifices and hard work do pay off – nobody is going to do you any favours unless you deserve it. Playing alongside these great bands has definitely been an invaluable series of experiences that have helped us along the way.

HMA: Was it difficult to get exposure coming from Cyprus?

Blynd: Cyprus is a tiny island of not even a million people, where Greek pop/folk music dominates the airwaves, so local exposure is minimal at best with regards to the exposure a band can receive elsewhere. It’s also incredibly expensive to play shows in mainland Europe for example, because of the travelling – we can’t exactly cross the Mediterranean on a tour bus. But like I said, nothing will materialize without sacrifices, so keep an eye out because you’re going to be seeing more of us!

HMA: What expectations do you have with your upcoming tour?

Blynd: It’s not always easy being a support band for such big names, because people are mostly waiting to see them, so you really have to be at the top of your game in order to win the crowd. We actually thrive on such challenges, and that’s exactly what we’re good at. Plus, the chance to travel around so many European cities and make new fans certainly trumps all the exhaustion and challenges that touring life entails.

HMA: The tour ends in London, look forward to your show and hopefully see you then!

Blynd: Looking forward to it ourselves! Get your devilhorns up and ready, we meet in December!