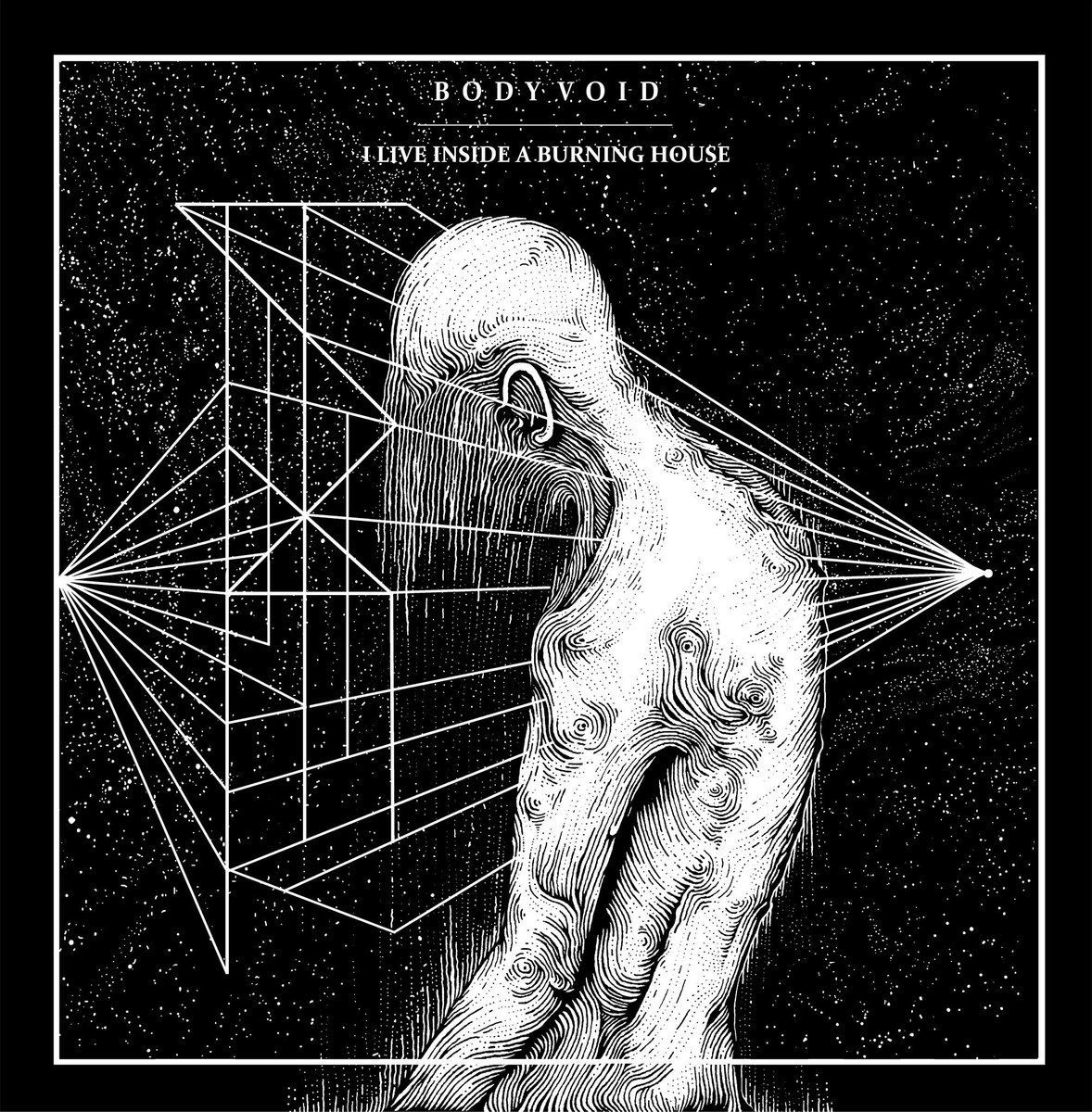 I Live Inside A Burning House By Will Ryan

Body Void is a 3-piece doom/sludge/crust trio from San Francisco, California. The group formed in 2014 as Devoid, releasing two demos in 2014 and 2015 respectively, before changing their name with the release of their first studio recording, Ruins, in 2016.

‘I Live Inside A Burning House’ is our second studio release. With our first, Ruins, we were very focused on recording the material we’d written since our previous home-recorded demos. We were eager to have our music captured in a studio environment and see what would come of it as we developed as a band. We were very happy with the results, but we learned a lot that helped inform our return to the studio almost a year and a half later. We wanted the new recording to more accurately reflect the heaviness and intensity we strive for in our live shows while creating a more nuanced and detailed atmosphere that our previous recordings maybe lacked. The new songs also increased in length from the first record, which was a result of us really approaching each track as its own self-contained ‘world’ so to speak.

As a band we’re pretty much continually writing new material, testing it out live, and re-writing. The oldest songs on the new record were being written before we’d recorded Ruins and were slowly fleshed out in the period between albums. Some of the ideas on the record even go back to a previous project of ours. We recorded the album over a period of six months in 2017 with Greg Wilkinson at Earhammer Studios in Oakland, CA. It was a much longer recording process than Ruins, which we finished in about a month. The difference is mostly just a testament to how much more work we put into the detail of this recording. That and the lengthier songs.

Both sonically and lyrically I think the artwork for ‘I Live Inside A Burning House’ definitely captures the feelings and themes we’re trying to explore. The artist is Ibay Arifin Suradi. This is the third album cover he’s done for us. We were immediately drawn to his work for his monochromatic style and cosmic sensibilities. Not to mention his stunning linework. Visually we’ve stuck to the theme that I think is kind of central to the band–it’s in our name–which is the connection between the cosmos and the body. Both the perceived distance between the two and the ‘closeness’ in that they’re in fact one in the same. For ‘I Live Inside A Burning House’ specifically, with the art we wanted to reflect the same sensibility as the record title. The album seeks to explore the visceral and often formless, dissociative feeling of anxiety, depression, and gender dysphoria. The direction we gave to Ibay was to create an androgynous figure with their skin and face sliding off tangled in a web of geometry.

Some of our main musical inspirations are Khanate, early-Full of Hell, Electric Wizard, Doom, Thou, Boris, Grief, Pharmakon, Lustmord, and Godspeed! You Black Emperor. Outside of music some big influences that come to mind are Carl Sagan, Ursula K Le Guin, David Lynch, Andrei Tarkovsky, and Stanley Kubrick.

I believe in emotion and the connections between human beings. Both on an individual level as well as a broader societal or structural level. I guess “belief” in this case to me means these things are where I put my faith. It’s the place from which I try to operate in everyday life and where I feel I can have an impact.