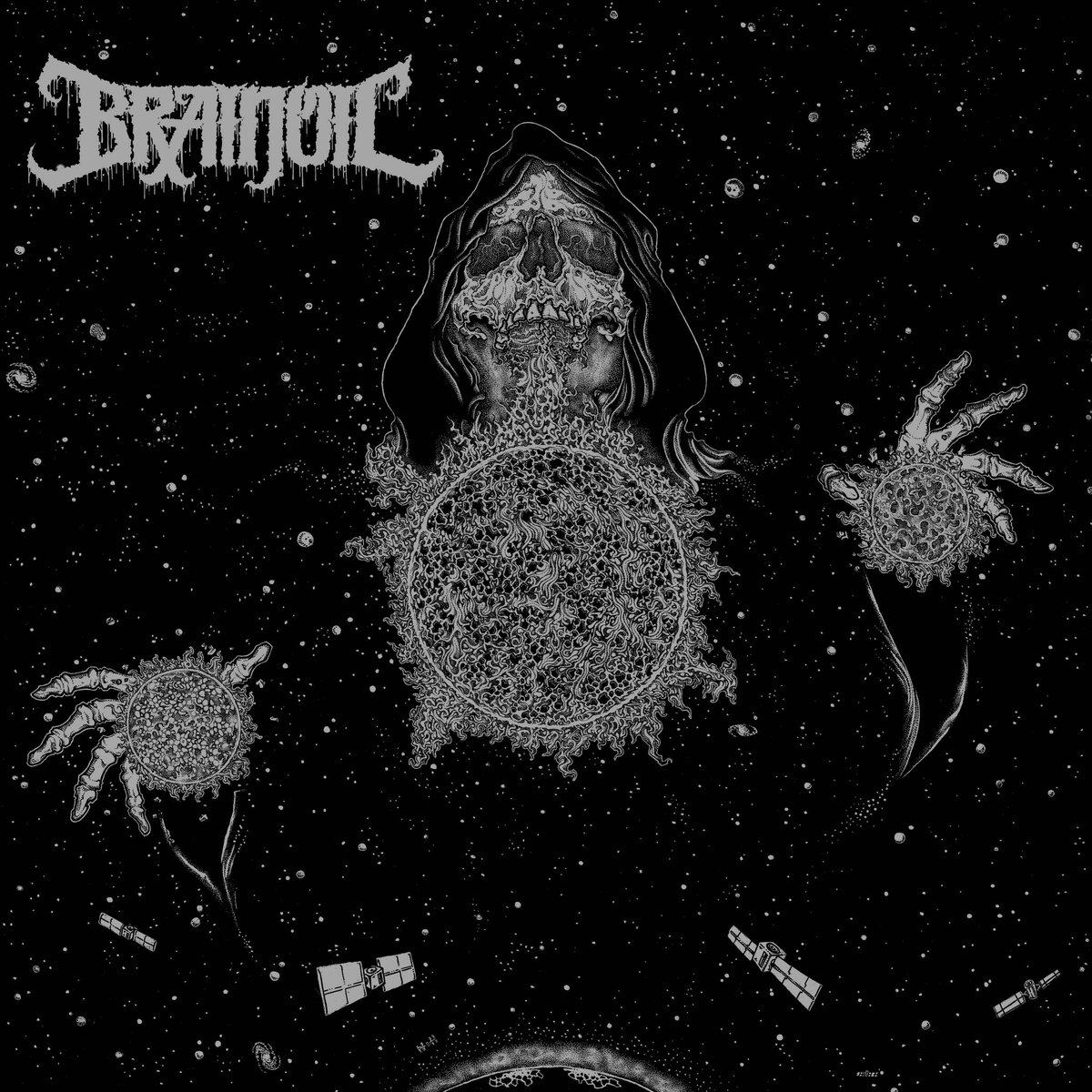 Sludge and Doom are often used to describe Brainoil. To us Brainoil has always been a blend of punk, metal, rock with elements of doom, sludge, crust, hardcore.

HMA: What can you tell us about your latest release and writing process?

NS: Singularity to Extinction is the 3rd Brainoil LP. The music is wider in scope and more polarized. The fastest and the slowest Brainoil material is on Singularity to Extinction. There is a little bit more old school 1989 death metal and crust influence, but it is not death metal or crust record. The writing process follows the path that we always have: writing heavy music with no preconceived genre constraints, just concentrating on writing songs with interesting riffs and less than typical time signatures and song arrangements. We followed many songwriting paths for this LP but took our time to save only the best material that worked as consistently as possible from song to song across the entire record.

NW: Only pretence on my end was to keep our sound intact without writing more of the same. Brainoil has always had the luck of straddling many genres and scenes which created an easy gateway for incorporating what Nate mentioned. One trick I use while writing riffs is to write on horrible or inappropriate sounding rigs. Acoustic guitars, unplugged electric guitars, amp simulator with scratchy tones. I want to focus on the riff sounding good without relying on a good tone. Those tend to have a more timeless vibe.

HMA: How would you describe the lyrics?

NS: My lyrics are ideas filtered through what I read reflected by the demands of the place where we live. I won’t be too prescriptive about the meaning, anyone who looks or listens that closely will draw their own conclusions. Any frustration and anger in the lyrics is not a binary question of one person on the outside, looking in upon others. Our collective inextricable fate is intertwined and it is not simply fatalistic fear. Technology and the inevitable path that all of us are on as it is linked to technology is one of the consistent themes of my lyrics on the record.

NW: Although I am a big fan of technology, the human race is fundamentally pretty careless and destructive (obviously not everyone, but as a global society). I spent a lot of time reading the industrial revolution era inventors biographies and how most of their technology got abused for capital gains. We live it now. In the end, it will probably be the downfall of our species. Technology and people are becoming one. A lot of the lyrics have nods towards this issue.

NW: The music and lyrics tend to be bleak and hopeless in many aspects. The character on the cover was one Santos created for a shirt design. I thought it would be cool to incorporate it into a new concept. I had recently read a book, The Three Body Problem. This character we used as an orchestrator of destruction the planet Trisolaris went through. Without explaining the book, it was a great parallel to what our lyrics cover. Monochrome not only looks cool but is cold while maintaining beauty. That was the main impetus when I pitched the artwork. Santos researched the book and did a great representation while incorporating the knowledge of monochrome so it would still pop.

HMA: Does your band have a fixation as such?

NS: No consistent fixation across everyone all the time, but on this specific record, Singularity to Extinction, the inspiration is very sci-fi. Philip K. Dick, Black Mirror, William Gibson, just to name a few.

NW: I would also like to add to Nate’s list J.G. Ballard, H.P. Lovecraft and living in pretty sketchy areas for decades all help open the doors to some dark subject matter.

HMA: What do you think of the current music/art style and aesthetics based on your music style?

NS: I try not to chase any current trend too closely, if something new grabs me I welcome that, but I don’t track the current trends. I continue to be influenced by the 80s aesthetic roots of this entire body of music genres we’re involved with. Simple, stark imagery, not always, but usually the better. In the ideal world, I like to fool myself into thinking the content aesthetics, but in reality, they are linked when it comes to heavy music.

NW: I just don’t know as I listen to a lot of variations of metal. Sequestering ourselves to a specific genre isn’t honest to what we consider as our musical influence. That being said, there are so many sick bands out there playing OSDM, grind, doom, punk, sludge, noise, etc. Keep your eyes peeled as a lot of the younger people are really raising the bar.