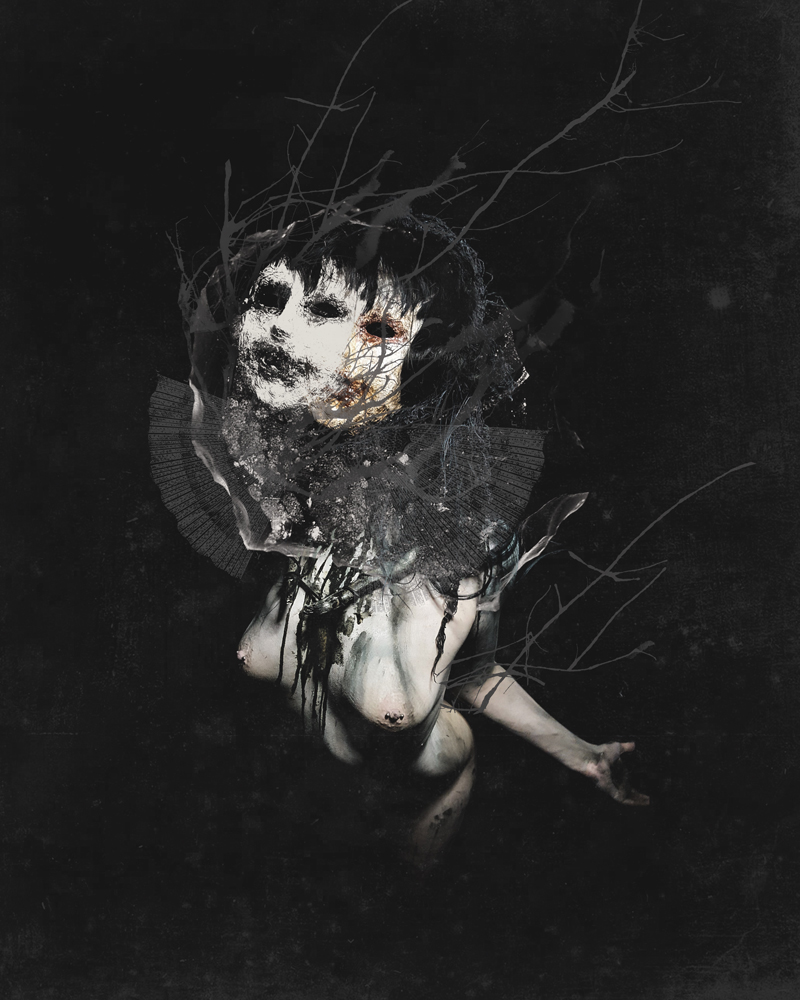 The horror and occult obsession

I’ve been drawing ever since I can remember. Recreating various movie monsters and comic/ cartoon characters I idolized. When I finally started making music and performing in bands, the necessity for visuals became imminent. Album art, show posters and merch design naturally became a way to further the creative process. Making the transition to the digital realm (Photoshop/ Illustrator, etc.) on my own. Endless Youtube tutorials and assistance from more adept peers. As time went on, I became fortunate enough to collaborate with other bands/ venues/ promoters on their own endeavors.

I use primarily, photo manipulation and digital painting. I am a digital hoarder of old, vintage photography. Only recently experimenting with my own photography. Cutting, adding, combining, mirroring, a collage of sorts. Then digitally painting over top. I’ve also been delving into the costume/prop world. More so now than in the past. Having directed/collaborated on a handful of music videos for my own projects, it became another necessity. Working at various haunted attractions for over a decade has helped. Surrounding myself with like minded individuals and again, more adept peers.

For the most part, bands have been very trusting and bestowed me with full creative freedom. I’d like to think that clients have an idea of what my “style” is and that’s why they’ve inquired. On the other hand, being a commissioned artist often means deciphering pre-existing ideas from clients that you have to manifest. The show posters/ flyers have been a personal favorite of the commissions. Listening to the music of the bands on the bill and coming up with a visual interpretation whilst adding my own touch. Having been inspired by the many great poster artists (past and present), who make show posters works of art, that live on long after the show.

I listen to music visually. Two sides of the same coin. Latching on to lyrical themes and playing out the ocular storytelling. For myself, they are extensions of each other. With my own bands, I’ve had the opportunity tell these tales in both mediums. When commissioned by other bands, it’s an honor to be a part of the creative process and visually interpret the music with them.

Always had an obsession with horror as well as the occult. To an extent, the bulk of my work features ghosts/ otherworldly figures. Using the vintage photos and portraits has played a major role in my development. Heavily influenced by the old silent film/ black & white/ film noir aesthetics.I participate, on occasion, in various group shows in and around Metro Detroit. Only this past year doing out of state exhibits.

The next two shows are Damned IX Exhibition at Tangent Gallery in Detroit, October 27th through the 29th. As well as The Dark Arts presents: Black Metal at The Shred Shed in Philadelphia, November 12th. Several more are in the works but nothing I can confide as of now.