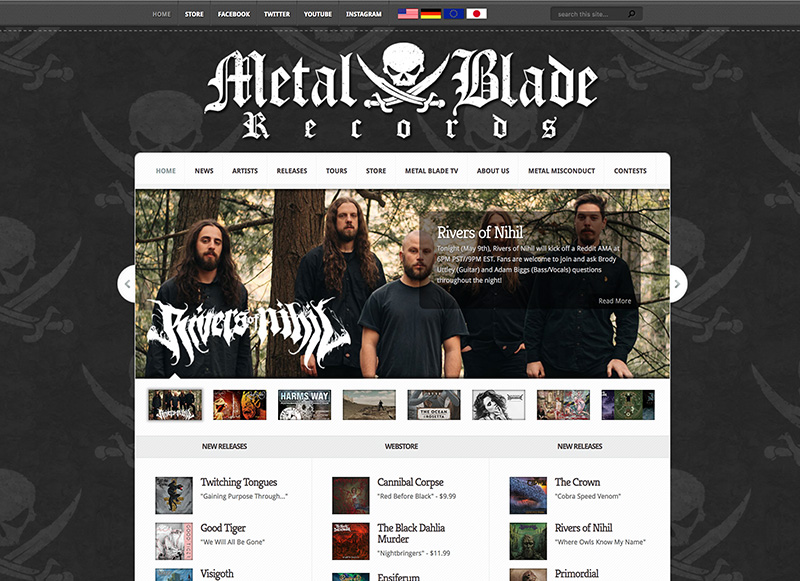 For the Sake of Heaviness

HMA: You have a book out ‘For the Sake of Heaviness: The History of Metal Blade Records.’ How does the book have a central message, or in other words, what do you like for the readers to take in?

Brian Slagel: It’s the history of a record company kind of starting. Also, just somebody starting from nothing and being able to have a successful business that has lasted this long. And I think it’s not only just the history of the label, but because we’re involved in so many other things, it’s a little bit of a history of the genre of heavy metal as well. So, it’s a nice easy read 3, 4, 5 hours. So hopefully, it’ll be entertaining and interesting.

HMA: And what are the upsides or downsides to having a record label?

BS: The upside is you’re able to work with a lot of great bands and just being involved in a genre that I truly love is by far the upside. The only downside is, it is a business, and you have to run it like a business. We feel like it’s a big, huge family between all of the people that work for us and all the bands and everything. But, we do have to make tough decisions sometimes financially and stuff. So, that’s probably the worst side, and sometimes, you have to make decisions that you’re not happy with based on economics or whatnot. But luckily, those are not nearly as much as the fun stuff.

HMA: In a nutshell, what can you tell us about the past, present, and future of the industry?

BS: The past is an interesting past. Of course, because all so many things have gone in about all these thirty-five years. But I do think the future is interesting. One thing that we’ve always tried to do after the late ’80s where I almost bankrupted the company, because when vinyl was going away, I thought, “Vinyl’s never gonna go away. I love vinyl,” and we kept manufacturing it. And one day got it all shipped back. So, anyway, I made the mistake of not listening to what people said, especially when things start to change and new technology’s coming in. So, I think we tried to over the years, whenever there’s a new technology, or whenever something has changed in the business, as opposed to resisting it, trying to embrace it, I think is one reason why we’ve been around so long.

And now, we’re coming to an interesting time where, for the first time in a long time, the music business, as a whole, is actually up. I think business was up 9% last year. It’s up a little bit more through the first part of this year. So, we’re seeing a little bit of the best of all worlds now, and certainly in the metal genre, where we still have vinyl, still exists and is doing well. CDs are obviously fewer numbers than they were before, but clearly, they still exist as a physical unit. And then you have the streaming services, where for ten bucks a month, or whatever, you can pretty much listen to any song you can ever want to almost anywhere you want to. So, I think that’s a good thing, and actually, moving forward, it looks like this is gonna be a good time for both labels and artists because you’re starting to see the money again being generated from music. So, we’re pretty excited about where the future is going actually.

HMA: So, were in a good spot. I include myself in as well with as a publisher.

BS: Yeah. Absolutely. I think, metal it’s been around for a long period of time, but I think overall, it’s very healthy. The only thing that we do struggle with these days is there’s not a lot of mainstream acknowledgement of what we’re doing. It reminds me a little bit like it was in the late ’90s. I mean, metal is in a way better place than it was back then, but you also were not part of the mainstream. So, that’s the only thing that we need to think as an industry, hope the pendulum swings back around again. It’s all pop and hip hop, and all this stuff is all mainstream now and not our type of music. But, hopefully, the pendulum swings back again, and we get back into a little bit of mainstream stuff, too.

HMA: Metal seems to appeal to people that have a care for collecting emotions if you like.

BS: Yeah. Absolutely. I think that’s one of the reasons why vinyl’s come back because you have the big artwork. It’s a cool thing to collect. And we do on every, on all the labels, do on every single big release, a big package with all sorts of cool different little things you could put in. I mean, I’m a collector, too. So, it’s fun for us to do those sort of things. And yeah, there’s a lot of people out there that collects whatever they can on their favourite artist, which is great.

HMA: I don’t think other types of music have a similar approach.

BS: I think, the other styles of music definitely, well they have their hardcore fans. Maybe the only other one that might be similar is country. But certainly, the fans are so passionate. And so, people that are into metal eat, sleep, live, and breathe heavy metal, and I don’t think it’s that way in a lot of these other forms. I think that’s one of the reasons why it’s still so successful today and has been around for so long.

HMA: Have you considered to expand the label as a publisher or a fashion brand. Anything related

BS: Not really. I mean, we’ve talked about a lot of those things over the years, but look, we are a label, and this is what we do. And we help the bands what we can do. We’re not a merchandising company. We’re not a publisher. We don’t have a staff to do that. We do what we do, and I think we do a really good job at that. So, I’d rather stay doing that then trying to branch out and maybe not doing such a good job.

HMA: Changing topic a little bit. When releasing a record, is there a specific process, when and how is the artwork commissioned?

BS: I mean, we have pretty long lead times, especially if we want to have the vinyl come out at the same time as the record comes out. So, we would need to have everything in-house, that means artwork, the entire layout of the album, the masters, and everything, about 4 to 5 months before a record getting released. So, we could get the bands into starting to work on the artwork as soon as they can. So, a lot of times once the record is written, and if there’s a bunch of lyrics there, generally, we always like it when bands can get the artwork at least started before they go into the studio. So, that could be almost a year sometimes before the record comes out. So, it can be anywhere to a year or so before their record comes out to a little shorter time period. But, we try to get the art as soon as we can. And also, give the artists plenty of time to create whatever they need to create, too, so there’s not a rush by the end of it.

HMA: And, I know it sounds like an obvious question, but how important to you is the artwork?

BS: I grew up in the 1970s. So, that was when the only thing we had was vinyl. We had the huge album covers. Covers to me, especially in the early days of metal, when I didn’t really know what was happening, and this is obviously a million years before computers and everything else, you see the artwork, and it looked like it was a metal album. You go, “Okay. I’m gonna try and buy this.” I think to this day, the artwork or the imaging is extremely important for what we do. And we try our very best to get the bands vision, and it also creates really nice pieces of art, especially now because we’re doing vinyl pretty much on every single release that we’re doing as well.

HMA: I like to find out, for you, like what is the best artwork for Metal Blade?

BS: I don’t know. We’ve had so many great covers over all the years. I mean, I go back to the early Cannibal Corps stuff, and as controversial, as crazy it is, I love the Butchered at Birth cover. I think that’s still, to this day, a striking, crazy image. I love what Amon Amarth has done with all of their covers. I like that sort of old school stuff. We’ve been amazingly lucky enough to work with some of the most famous artists of all time. We had Ken Kelly design the Metal Blade 20th anniversary box set with an original piece of art that I’m still kind of blown away by which is amazing. We licenced a couple of [Dalee?] covers for a band named [Audenstree?] back in the ’90s. So, again, [Dalee?] is one of my favourite artists of all time, so be able to work with him. And we’ve also done some stuff with Frank Frazetta, and actually, now that he’s passed away, we’re working with his estate. And We have a whole line of, we talked about clothing before, we do have a line of Frank Frazetta clothing and posters of some of his classic album covers. And we use some of his stuff for some of our album covers, too. So, those are always really fun when you can take a classic artist, and H.R. Giger, whoever it is, and do a piece of art with them. It’s truly amazing when we worked with Celtic Frost. So, that’s really fun for me, to be able to have some of those iconic artists and images be on some of our albums as well.

HMA: And lastly, this is just a general question. Metal overflows stories of hell, catastrophes, dystopian realities, and a lot of fantasies. So, for you, in the end, what makes metal so real?

BS: Well, I think that the artists, and the people involved in it, are all very real. They’re playing that actual instruments. They love the music. They’re involved in the music, as are the fans. I can’t say that about a lot of other genres. I think it’s a very honest form of music. It is what it is. It’s very honest, and you know clearly, it’s very fantasy oriented. It’s like watching a horror movie or something. Again, so many people that are into this are into that sort of art as well. I just think it’s really honest. The people involved in it are real people that love the music. And I think that’s one reason why it’s been able to exist for so long is that of that, and the bands and the fans are all as one, as it should be.