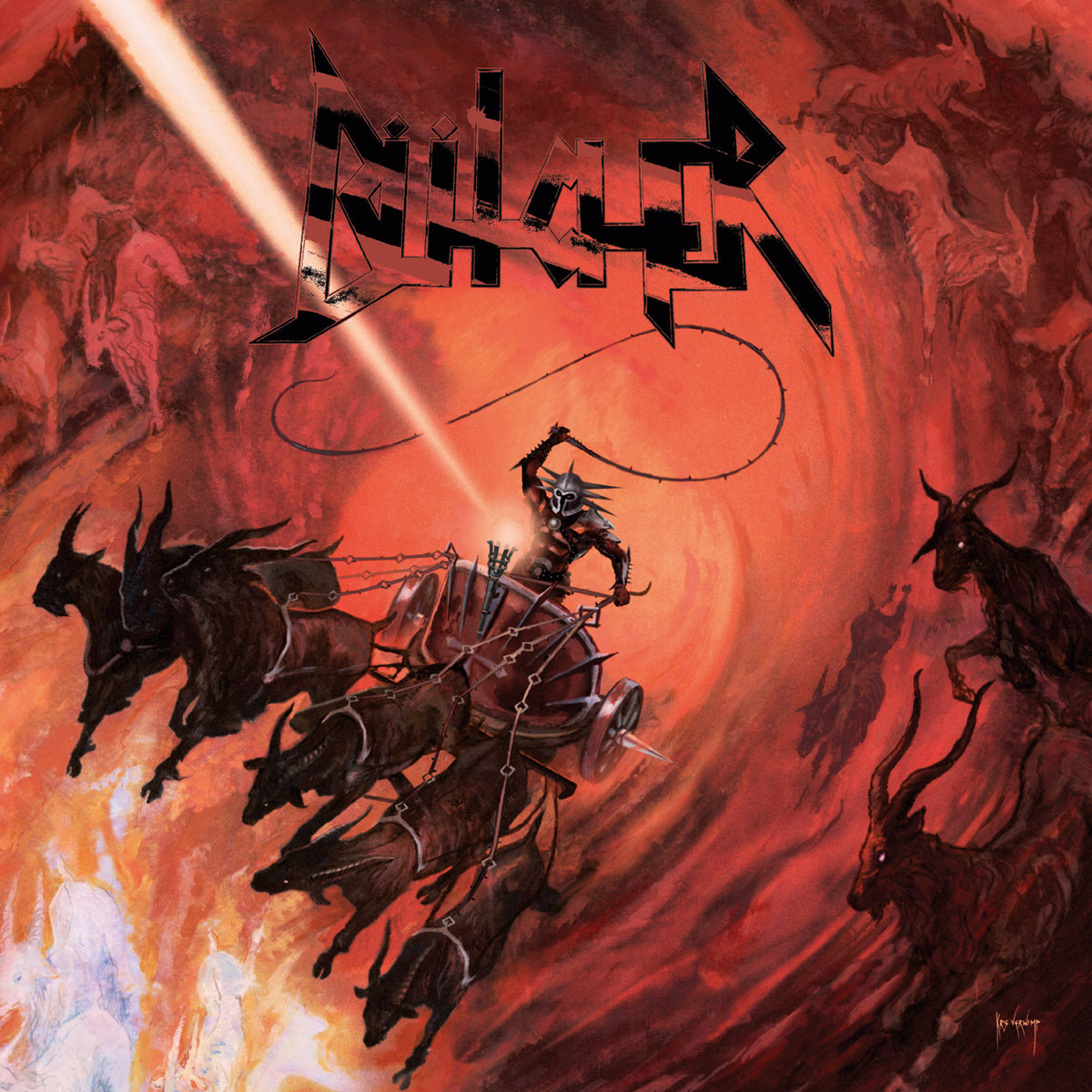 R. Hellshrieker: Hi Alex, this is R. Hellshrieker, nice to meet you. I am the vocalist in the band and the only original member. I am joined by KK Ripper, our lead guitarist and main songwriter. He will answer most of your questions today. I will not bore the readers too much with early details about the band, because Bütcher as the formation you know today is entirely different than when the band started. So, to cut a long story short: the band originated in the early 2000s, had several line-up changes, and then suffered a long hiatus because we called it quit in 2007, but none of it seems to matter. At the end of 2014 we rejoined with a different key member in the band, that is when KK Ripper took up lead guitar duties. I like to think that all these happenings just were necessary to bring us together. Since 2014 he and I have moulded Bütcher into a machine of vicious and unrelenting metal power.

Bütcher as the band you know at this moment? At the start of the recordings of our latest album, we were joined by the immense qualities of LV Speedhämmer and AH Wrathchylde. Since then, the band has formed its own identity, and the Bütcher name started spreading like wildfire throughout the metal underground worldwide. Right before the Covid-19 pandemic, we decided on returning to being a five-piece act. The latest songs are meant to shine with two guitars, and our new material continues to evolve into the twin-guitar territory. I am sure Mr Ripper will expand on that later in this interview. When we met with Max Mayhem (known from Evil Invaders) to perform on the album release of ‘666 Goats Carry My Chariot’, the energy worked out so well that we decided to continue our relationship afterwards. That is the story in a nutshell. Too bad we weren’t able to play live a lot with the five of us, yet, due to the Covid-19 pandemic.

HMA: I wanted to start with the name Bütcher.

R. Hellshrieker: When we started out, we just wanted a short, catchy name. Something stuck in people’s minds resembled short names such as Venom, Slayer, or Sodom. Those ‘simple’ words carry so much weight and tell you everything you need to know: it’s powerful, it’s evil, it’s fast, it makes you want to smash your head through a brick wall. I think we borrowed freely from the ‘Mad Bütcher’ EP by Destruction and took it from there. We added the Metal Umlaut to it, to give it that Motörhead, BÖC spice and the universal, primal strength that just stems from that.

HMA: Your latest album ‘666 Goats Carry My Chariot’, can you expand on the title?

KK Ripper: Well, the title was just one of those “metalisms” R. Hellshrieker came up with. We’re always trying to develop just these epic heavy metal concepts, which influence the music’s direction and vice versa. I think R. came up with “6 Goats carry…” and after some back and forth we thought “dude, that has to be ‘666 Goats’”. I’m kinda autistic that way; I love when the lyrics and artwork are really inseparably intertwined with the music, and I think we nailed it.

We’ve upped the amount of black metal influence on the new record. The first album had more of a first wave black/thrash vibe; I feel we gravitated towards more second wave tremolo picking; dissonant and somewhat atmospheric riffing, shrieked vocals and overall evil vibe, but still in a way that reminds more of Nifelheim than it does Emperor. Apart from that, there’s also a huge entry of old school (epic) heavy metal in our music, which I always listen to. So influences from the greats like Iron Maiden, Judas Priest, Manowar and Mercyful Fate of corpse. But I’m also very into some of the newer bands who set the bar high for new and exciting yet old-fashioned heavy metal; bands like Vulture’s Vengeance, Eternal Champion (their drummer Arthur Rizk did one hell of a job mastering our album btw!) and Traveler. There is still an emphasis on velocity in our music, of course, but this concoction of black and heavy metal is such a delicious witches’ brew that I’m inclined to keep pushing this direction and see where it takes us. With the inclusion of new axeman Max Mayhem (Evil Invaders) we’ll also get to flesh out the new material even further with layers of twin guitars, so basically: we’re just getting started!

HMA: Why did you go for Thrash/Speed?

KK Ripper: Well, our music is just a cross-section of everything that lives in the heavy metal universe. Or our definition of the heavy metal universe rather, which is why we still apply the blanket term “speed metal” to our music even though there are many other influences as well. It denotes an attitude towards modern ways of doing things in metal; a “fuck you” to the music industry. This is also the main reason we are so hellbent on the analogue recording, e.g., it’s like they say in Die Hard 4, we’re like a Timex watch in a digital age.

R. Hellshrieker: When we started out, even thrash metal was already being tainted with this happy-go-lucky kind of branding. The emphasis shifted from the riff itself, to ‘how fat’ it was to the ear, and how many layers of production you put on it. To me, thrash lost its appeal and its primal fury. Speed metal is the only term that wasn’t and hasn’t yet been marketed to boredom. And speed metal is not so much as how many BPM’s we can play every goddamn song, but it certainly is about what feeling it evokes with every goddamn note we play. Whether the riff is inspired by Thin Lizzy, the vocals by Darkthrone, or we indeed nudge towards Savage Grace in terms of speed and execution, the feeling of speed metal is present.

Speed metal bands are few and far between. We look towards speed metal more in terms of songs. Dio, Omen, Griffin, and Motörhead are bands that you probably wouldn’t file under Speed Metal in your record cabinet, but they all had a few or more speed metal songs. So, as KK Ripper says: even though you will hear a lot of heavy, black, thrash or even doom and death metal in our material, speed metal may not apply to every second of metal on our songs, but it says everything about our attitude.

KK Ripper: As I said before, we’re always looking for things that fit into our heavy metal universe; do Viking funerals, chariots pulled by goats, Iron Bitches and Metallströms fit in that universe? Yes, they do. I don’t mean to sound like a twelve-year-old but we try to just be spontaneous; we all love Conan, H.P. Lovecraft, 80s horror and classic Satanic metal lyrics from the greats, and there is enough of that to work with. Politics never come into play; it might have its place in arts, because of expression and whatnot, but not in heavy metal. It’s good, clean escapism, which is supposed to be enjoyed with a beer and a shot. I’m going on a bit of a Dio bender lately and his lyrics about dragons and wizards just takes me to another plane of existence. That’s what metal is supposed to do!

HMA: How well acquainted are you in the dark arts?

KK Ripper: Even though we use certain aesthetics from esotericism and the occult, there is no dogmatic Satanism, actual “Dark Arts” or religious opinion of any kind in what we do. It’s all for aesthetics, because we’re huge Venom and Bathory fan boys. I can’t even put in the effort to pretend like I’m into it for reals, sorry! It’s really obvious that we have shit tons of black metal influences, but you can hardly call our music “black metal” and I intend to keep it that way.

KK Ripper: The talented Kris Verwimp, Belgium’s finest potentate of metal art, did the artwork. His work with Enthroned and Absu is beyond legendary, which is why we are so honoured to have him do the art. We briefed him intensively, to the point where he said, “these aren’t ideas, these are instructions”, haha. But once he did his own thing and envisioned it, he was able to make something magnificent, which included everything we asked for. The artwork tells the story of the lyrics of the title track, which is about a world ending entity scouring the multiverse on his infernal chariot!

R. Hellshrieker: We thought about the artwork for a long time and we wrote down a few names of artists we love. But honestly, we got our mindset on Kris after a few discussions. Because for me, the main reason I wanted him to do it for the ‘666 Goats… ‘ album was the Opus Nocturne artwork for Marduk. I wanted the same amount of evil and majesty on our frontcover, and I was sure he could convey it. And we are proud of having the album out via Osmose Productions, and having Kris on it, just as with all these classics I grew up on … well, it kind of completed the circle. I guess we gave him a bit too much input at one point, indeed, but it was so cool working with him because he basically said ‘let me do my own thing now’. And the result is better than we ever dared dream of. I am still over the moon with the album cover.