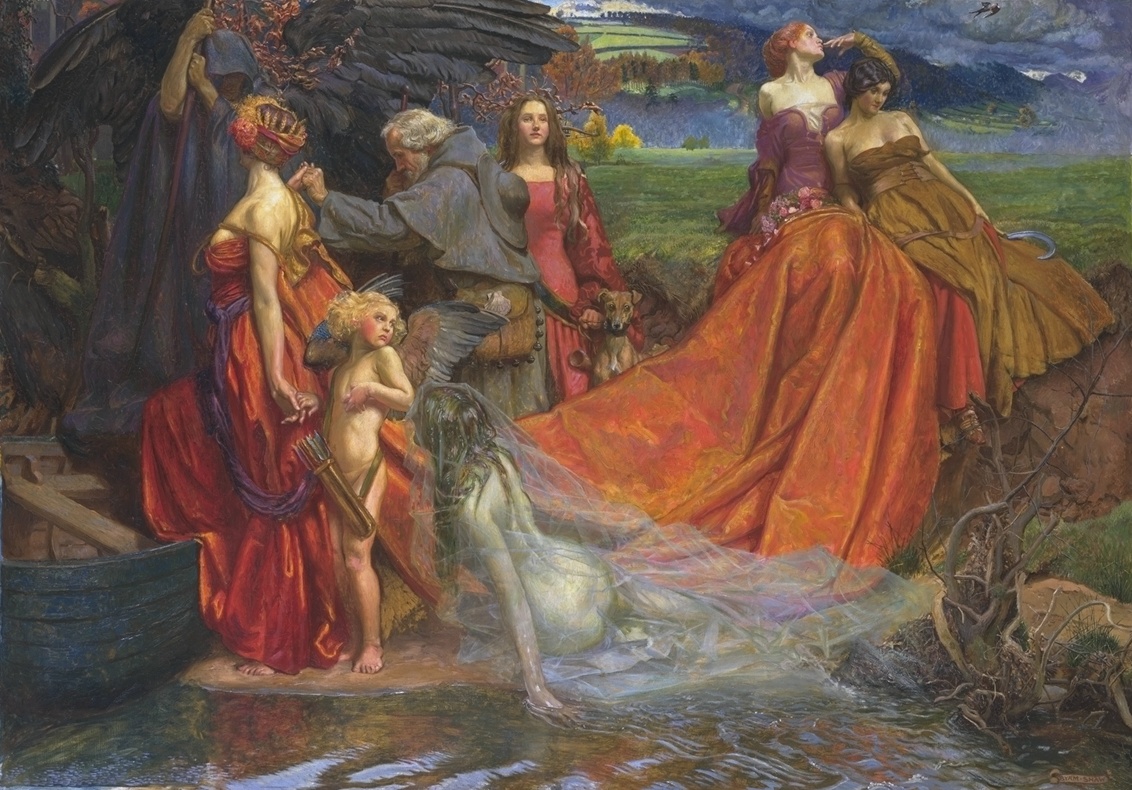 One of the most prolific artists of the late Victorian and Edwardian eras, Byam Shaw excelled as a painter, illustrator, printmaker, theatre designer, teacher and muralist. John Byam Liston Shaw was born in Madras on 13 November 1872, the son of John Shaw and Sophia Alicia Byam Gunthorpe. His father was Registrar to the High Court of Madras and the boy returned home to England with him in 1878. Despite being something of a poorly child, Byam Shaw showed an early talent for drawing and upon the advice of Sir John Everett Millais, entered the St John’s Wood Art Schools in 1887. Amongst his fellow students were the portraitist George Spencer Watson, the animal painter Roland Wheelwright, the landscapist Rex Vicat Cole (who later was to write Byam Shaw’s biography) and Evelyn Pyke-Nott, his future wife. Byam Shaw became a probationer of the art school in 1890 and his composition the Judgment of Solomon won the Armitage Prize in 1892. The following year he moved into Whistler’s old studio in Cheyne Walk with another art school friend Gerald Metcalfe, and exhibited his first painting at the Royal Academy, Rose Mary, based upon a poem by Dante Gabriel Rossetti. This was followed up by two more Rossetti inspired canvases, the Blessed Damozel (Guildhall Art Gallery) and Silent Noon (on loan to Leighton House) which betrays the influence of Millais’ early works, and also that of John William Waterhouse. Many of Byam Shaw’s paintings pay homage to the Pre-Raphaelites in subject matter, colouring and treatment. His masterpiece, Love the Conqueror, a ten foot canvas contains around two hundred figures and sold at the time for £1000. After a favourable review in the 1898 Magazine of Art, Byam Shaw began to focus more upon book illustration, most notably his plates for Tales from Boccaccio done into English by Joseph Jacobs (1899) and over 500 drawings for the Chiswick Shakespeare. His style echoed that of the illustrators of the 1860s, although he was able to take advantage of the advances in colour printmaking processes that did not exist a generation before.

An exhibition at Dowdeswell’s in 1902 included thirty canvases in the Ecclesiastes series, and further works were shown at the Glass Studio in Leighton House later the same year. Byam Shaw was commissioned to produce thirty four illustrations for the Historic Record of the Coronation of King Edward VII and Queen Alexandra, published in 1904 and helped to design the costumes for Beerbohm Tree’s Much Ado About Nothing which opened at the newly renamed ‘His Majesty’s Theatre’. Not long after he had joined Rex Vicat Cole as a part-time teacher at the Women’s Department of King’s College in Kensington Square, although continued to produce oil paintings, watercolours and book illustrations, including those for Charles Reade’s the Cloister and the Hearth published in 1909. His old friend, the American artist Edwin Austin Abbey enlisted Byam Shaw in his mural scheme to decorate one of the corridors in the Palace of Westminster, along with five other young artists of the neo-Pre-Raphaelite school. In 1910, Byam Shaw and Cole resigned from King’s College and opened their own school of art in Campden Street, Kensington. Further commissions followed for drawings of King George V’s coronation in 1911 and for watercolour illustrations for Laurence Hope’s the Garden of Kama published in 1914. Byam Shaw had continued to exhibit at the Royal Academy, ROI, RI, the Pastel Society, and at the RWS, where he was elected an Associate in 1913. Just before the outbreak of WW1, he completed his work on the Act Drop for the London Coliseum which sadly no longer survives. During the Great War, he enlisted in the United Arts Rifles along with his lifelong friend Cole, although Byam Shaw transferred to the Special Constabulary soon after. His war cartoons appeared in the daily newspapers, and he found much work in painting portrait and memorial commissions. Shortly after the end of the war, Byam Shaw collapsed and died on 26th January 1919. He was buried at Kensal Green following a funeral service at St Barnabas Addison Road, where a monument to him still remains along with two stained glass windows that he designed some years earlier. Byam Shaw is best remembered today for his work as a book illustrator. His style inspired an entire generation, most obviously in the work of his close friend and fellow-teacher Eleanor Fortescue-Brickdale. He is also remembered through the art school that he founded, which produced some of the finest and most innovative artists of the twentieth century. The Byam Shaw School of Art bore his name right up until 2003 when it became part of the Central St Martins College of Art and Design.