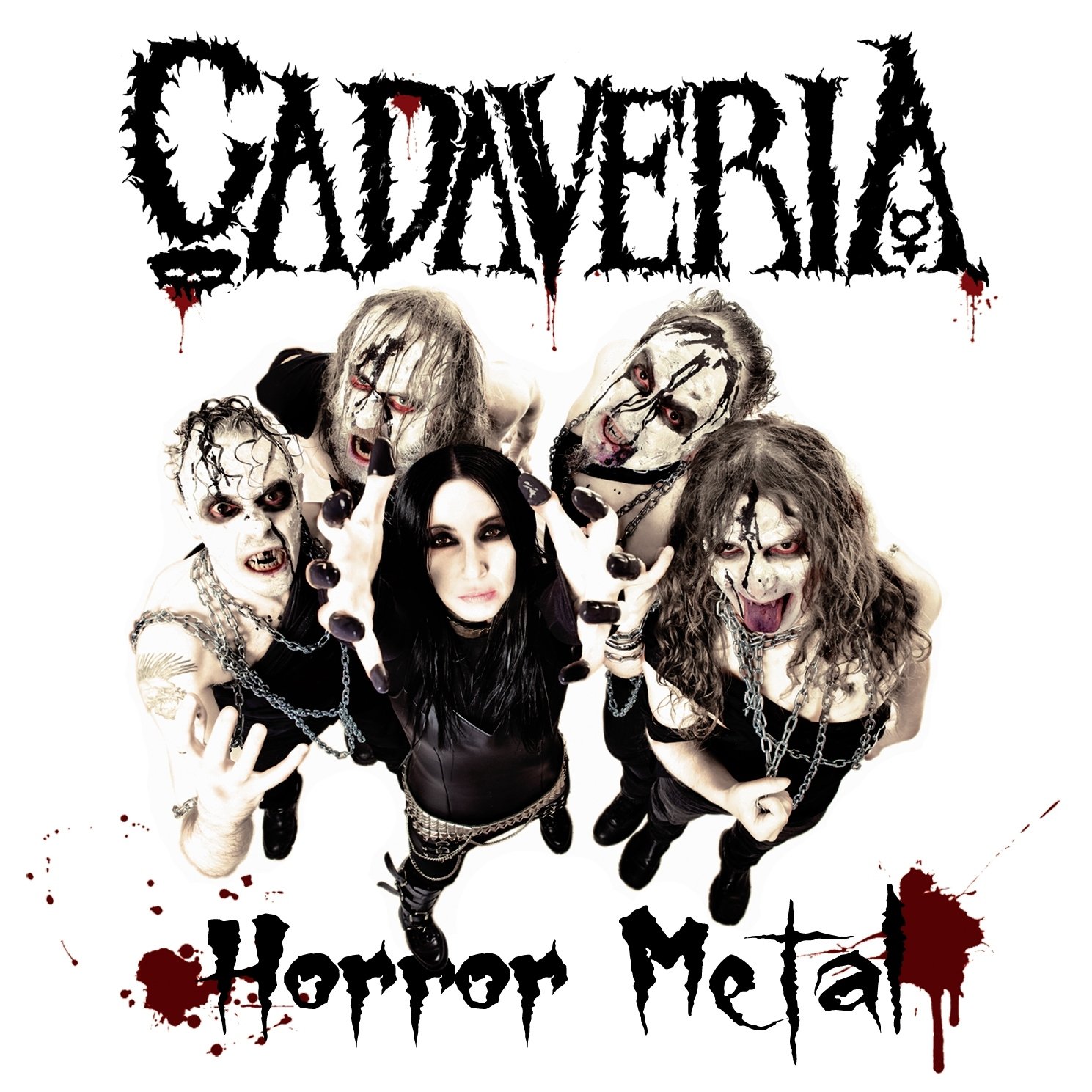 CADAVERIA was formed in 2001 by Cadaveria and Marçelo Santos (Flegias) with the intent to create a virtual space where to freely express themselves as musicians and extreme artists. CADAVERIA style, labelled Horror Metal, can be identified with a personal mix of Black Metal, Death and Gothic. To celebrate its 15 years of activity, CADAVERIA enters recording studios to give life to “Mondoscuro” EP, a special project built with legendary thrashers Necrodeath. The EP will contain six tracks: two brand new and co-written songs, two covers (one of The Beatles and one of Type O Negative) and two unusual “exchange of roles”, that will see CADAVERIA reinterpreting a classic by Necrodeath performing a CADAVERIA hit. “Mondoscuro” was released on September the 2nd, 2016 via Black Tears on CD and will be printed on vinyl by the end of 2016 via Sleaszy Rider Records. A new era of darkness has begun!

HMA: Hi Cadaveria, welcome to Heavy Music Artwork. Can you start by telling who you are and what is Cadaveria about?

Cadaveria: Hi and thank you very much. It’s a pleasure to be here on Heavy Music Artwork. Well, I’m the singer of CADAVERIA band. I founded this band in 2001, after ten years spent with another Heavy Metal act, and since then we have released five full-length albums, a double DVD and, recently, an EP. Our genre is difficult to define in few words: basically, our music is a personal mix of Black Metal and Death Metal with Doom and Gothic influences and the lyrics deal with topics like death, existence, horror stories, consciousness, cosmic energies, paganism and spiritual growth. Fans and critics have labelled our style Horror Metal, not just for my dark and pale image, but rather for the obscure atmospheres evoked by our songs. This definition, that musically means all and nothing, and the fact to be totally independent basically leave us free to experiment while we compose and to play the music we like and feel, with no particular boundaries and without following any trend.

HMA: You have recently released a split record with Necrodeath, what can you tell us about this collaboration?

Cadaveria: The idea to release something together with Necrodeath was flowing in our minds for a long time. These two bands have an individual history and they have always walked along parallel paths without meeting each other, but at the same time there is a strong connection between them, for the fact we share two band members: our drummer, Marçelo Santos/Flegias, is Necrodeath’s singer and GL/Peter Dayton plays the bass in both the bands. Last year we felt the time has come to make it real, so we start thinking about this EP and what could have been its contents. We wanted to create something different from an ordinary split EP, we wanted to make the two bands interact on the same songs and also to play some covers. Finally, Mondoscuro features two brand new and co-written songs, two covers (one of The Beatles and one of Type O Negative) and two unusual “exchange of roles”, that see CADAVERIA reinterpreting a classic by Necrodeath and Necrodeath performing a CADAVERIA hit. Recordings took place in two different Italian studios so that each band preserved its own sound, but the recordings studios worked in connection, in order to give unity to the final product.

HMA: Probably you get asked this a lot, how did you get the idea of using pseudonyms of antagonists from David Lynch’s movies?

Cadaveria: Besides being a musician I’m a video maker and I love cinema, especially David Lynch’s filmography. The same does Marçelo Santos, with whom I have been creating music for the last twenty-five years. When we started CADAVERIA band we decided to pay homage to this great director and that every band member would have got his nickname from a “bad character” of Lynch’s movies, except me. In these fifteen years, the band has experienced some lineup changes, but the tradition continues. So last year bassist Killer Bob has been replaced by new Peter Dayton.

HMA: You describe your style as ‘horror metal’, who are your main influences?

Cadaveria: I grew up listening to Mercyful Fate, Death, Sepultura, Norwegian Black Metal and some Gothic Metal, while the guys were listening to Venom, Slayer and other Thrash Metal bands of the Nineties. We can say we are all for extreme music but we don’t identify CADAVERIA in any specific genre. Our music is born spontaneously and we don’t care to belong to any trend. Horror Metal is a definition born from the critics, that with our previous albums probably experienced some problems in positioning our style in the music panorama, and in a second time, it was adopted by our fans. Finally, in 2012 we decided to entitle our fourth full-length album Horror Metal, and from that point on we like to say we play Horror Metal. But it’s just a convention.

HMA: Italy has a long tradition with cult-like metal bands such us Death SS and Paul Chains. Is the style still alive and well in Italy?

Cadaveria: Yes, it seems it is alive, thanks to these names from the past and to some new acts that refer to them. Sometimes it is more a matter of look, image and iconography rather than of playing a specific style, but however, it seems cemeteries, zombies and horror movies in general, continue to inspire music and nourish artistic minds here in Italy.

HMA: Since we have just talked about movies and horror, surely you have your favourite horror film list. Any names that come to mind that have directly influenced your music… and of course why?

Cadaveria: Of course I have my list. In my opinion, the best ones came from the past, from the sinister Cabinet of Dr Caligari up to Dario Argento’s movies of the Eighties, passing through, Nosferatu, Rosemary Baby, the Exorcist and the Chainsaw Massacre. Cinema has always been part of our music, an inspiration for the compositions and sometimes for my lyrics. For me, it is quite natural to visualize music, to translate it into images when I produce music videos and vice versa to make a movie scene, or story or a movie dialogue become the embryo of a song. Mondoscuro is full of movie references. The cover of Mater Tenebrarum by Necrodeath, that on the EP is performed by CADAVERIA, ends with an outro taken from Dario Argento’s Inferno soundtrack. Both (the song and the movie) talk about the “Three Mother” (Suspiriorum, Tenebrarum, Lacrimarum). Moreover, the EP title refers to the cinematographic genre “Mondo film” of explicit documentaries, born in the 60s and depicting sensational, bloody and shocking scenes. The cover artwork synthesizes these topics in some way.

Thanks a lot for this opportunity. Hail to all our fans and readers. Those who never listened to CADAVERIA can fix it starting with Mondoscuro and then go back. Enjoy!